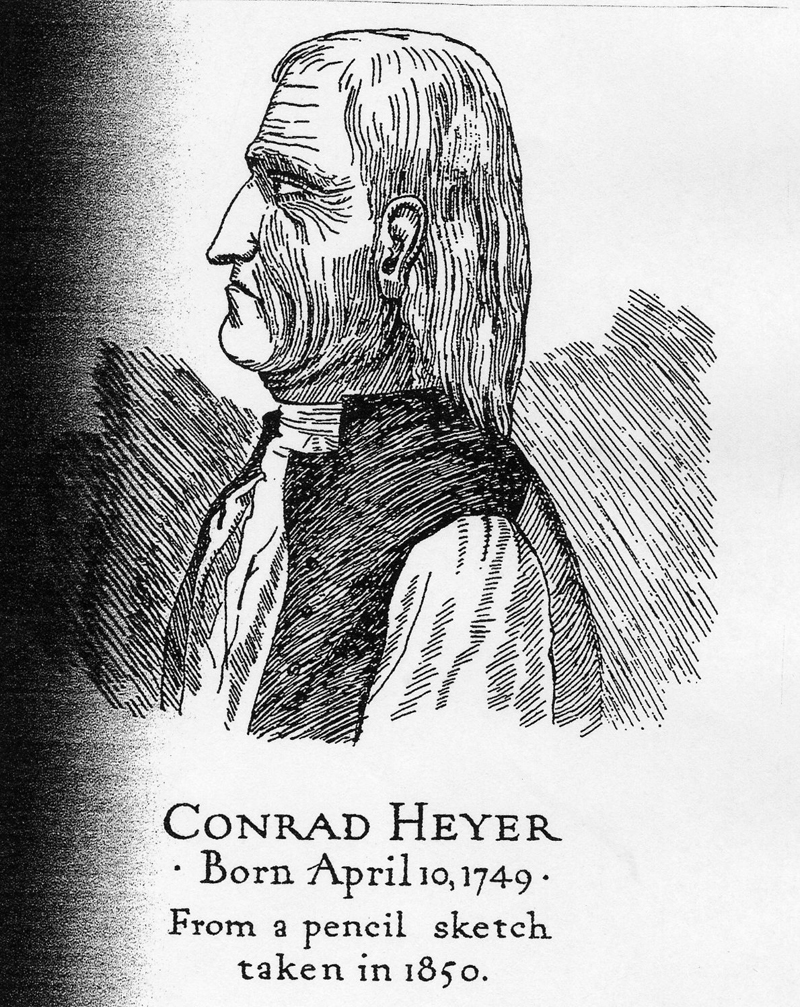 A drawing of Conrad Heyer.

June 17, 1856 saw the largest throng of people ever to grace Waldoboro’s streets. Thousands of folks had arrived in the village strictly by foot, carriage, or boat, as there were no railroads in those days. They all came for the purpose of paying a last tribute to a hero, a legend, a myth. Conrad Heyer’s incredible life — described by newspapers in Maine, and papers from as far away as Milwaukee, Wisc. — had come to an end in February 1856. He was 107 years old.

Heyer had been born in a log cabin on Schenck’s Point, South Waldoboro on April 10, 1749. He was the son of Martin Heyer, who had died that same winter from the very common hunger, cold, and privation; baby Conrad became one of the first white children born into the fledgling Broad Bay colony. Surviving the hardships, his life was destined to span the town’s colonial beginnings, Indian uprisings, the Revolutionary War, the War of 1812, Maine becoming a state, the great days of shipbuilding, and the lead-up to the Civil War.

Joining up with George Washington’s army at age 25, Conrad Heyer served for at least one year, surviving Valley Forge, and being present at the fall of Fort Ticonderoga and the surrender of General Bourgoyne. He conscientiously voted (always as a Whig) at every presidential election his entire life, often walking long distances to the polls. Fifteen presidents! Never learning English, he served on committees, sang beautifully and acted as choirmaster at the German/Lutheran Church for 80 years – easily able to read the fine German print of the Watts hymnal “without spectacles at age 100 — like a man of 50!” His fine voice was enjoyed in the very first Lutheran service in the “new” church (after it was dragged across the river), and also in the very last service, as that once dominant culture in Waldoboro was passing just prior to his death.

A photograph taken of Conrad Heyer is one of the earliest ever of a person in the United States. He was then 103.

Revolutionary War veterans, although heroes, were not treated well financially after returning home. Heyer’s pension, like most others, was tiny at $8 per month. Note that Massachusetts ex-soldiers fared even worse, drawing only $4 per month!

Although one legend has it that Heyer celebrated turning 100 by hand-mowing his back field in the morning with a scythe, his request for assistance in 1818 tells a sad story:

“Farmer — unable to work by reason of age and infirmity. Wife, 63 and crippled; daughter 26 and nurse to wife.

In 1811, Heyer and his family — there were nine children in all — were able to move to a small farm on the North Waldoboro Road, which is Route 220 today. Later, this farm was owned by Everett Teague. Death came to the elderly gentleman Feb. 19, 1856, and he was buried in a small graveyard on this farm. However, this was not the end of the story. On May 24, 1856, church members voted to authorize a “committee of the burying ground” to find and pay for a “suitable burying place in the German Cemetery.” Waldoboro citizens followed this up by authorizing money for a suitable monument to read, in part, “This monument is erected by the citizens of Waldoboro to perpetuate the memory of an honest and worthy man.”