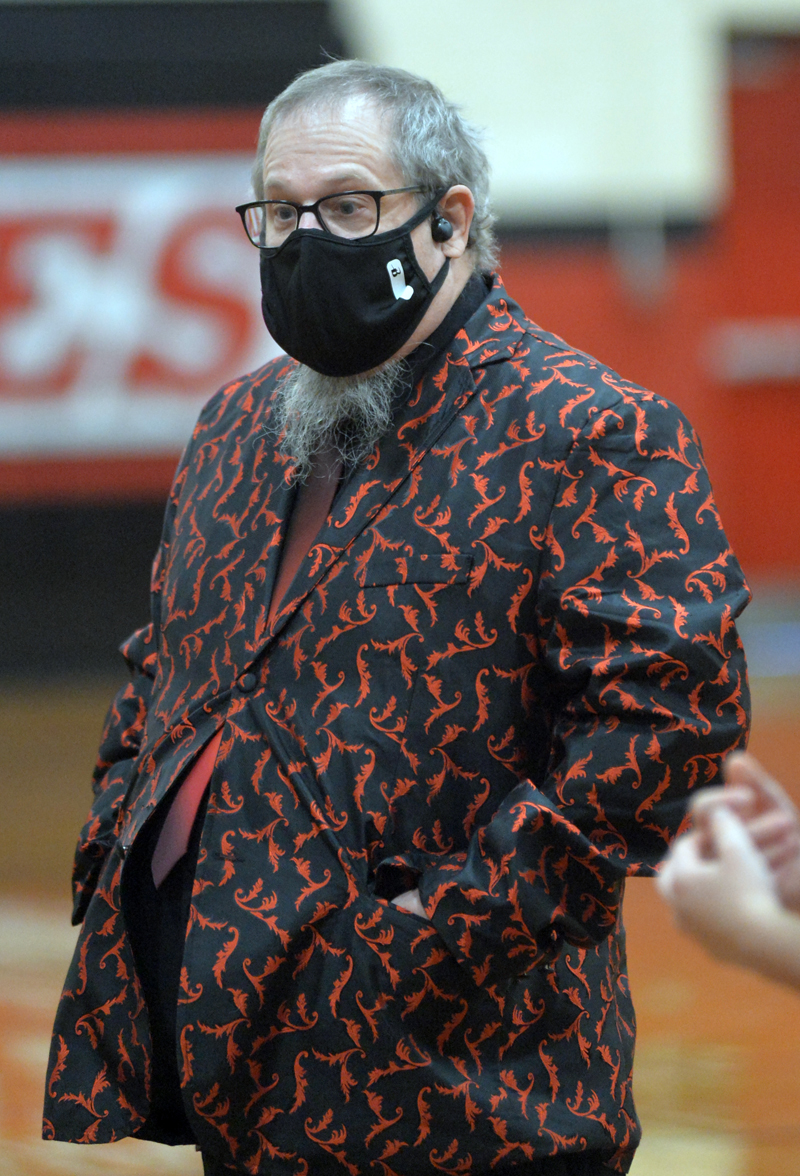 Applebee did not know what he was in for. He started as assistant athletic director, and then was assistant AD and girls varsity coach. Cossette took ill in the middle of the season, and Applebee took over his duties, plus continued to coach the girls team.

In the previous two years, Applebee’s duties consisted of mostly handling after school activities, “being the administrator on site during games, and handling the officials and games.”

His duties as assistant athletic director, during COVID-19, were extended to be a fill-in coach in the event that a coach contracted the virus.

Before the season started, the high school was in need of varsity boys and girls basketball coaches. Rick Larrabee took over the boys coaching position. The Monday before the first practice, Applebee got a call from Cossette, saying the varsity girls coach was ill and would not be able to coach. Applebee stepped up to coach the girls and try to build the program.

COVID-19 wreaked havoc with sports schedules all over the state, and Wiscasset was hit hard. Wiscasset girls basketball team played only 11 games.

Applebee said COVID came in waves. In the first wave, most of his players had to quarantine due to close contacts. The second wave saw half his team out with the virus.

“It was a lot more than I expected,” Applebee said of complications due to COVID. “We had weather cancellation and COVID cancellations.”

They also had to cancel games when a bus driver was unavailable due to COVID, and had to cancel playoff appearances in the Busline League because of the virus.

Applebee put his own gunsmithing business on “the back burner.”

“It was surprising how long the AD work took, working with officials, assigners, and lining up buses. It was an eye opener. In a regular year, it would not have been as bad. Because of COVID, it was worse that it could have been. It was nothing I couldn’t handle. I did not mind doing it, but it was not what I signed up for. It has been an interesting season,” Applebee added.

“Radar should get the bulk of the credit. He stepped up to do all of the work not just for basketball, but for indoor track, swimming, and the middle school sports,” Cossette said.

Coach Larrabee helped out, getting the video camera set up, helping out at girls games when Applebee was coaching, and filling in keeping the clock and the book when needed.

“Rick was a big help. He has a ton of energy, which is good,” Applebee said.

“His connections got us into Augusta to watch a (basketball playoff) session. That was a huge thing at the end of the season,” Applebee said of Wiscasset players, who for most were watching their first playoff game. “That was all Rick’s doing.”

Games were livestreamed on YouTube. In order to make videos available, they had to have a certain number of followers. Applebee reached out to his former players, and high school friends to reach the qualification mark.

“We helped each other out. There was only one home game I could not be at, and that was senior night. That was the only day all season we had games on the same night,” he said.

“They really went above and beyond, and helping in every facet of the basketball season with me. Honestly Radar was amazing. He helped with rescheduling everything, and contacting parents. Seriously Radar was the hero of February,” Cossette said.

A low-key guy, Applebee’s trademark suit coat is anything but. “Two or three years ago I got to thinking about Lou Carnesecca, a long-time coach at St. Johns in New York. He had a sweater he wore to every game. I was home thinking and said I need to come up with some kind of jacket to wear. That was the one the girls liked the best,” Applebee said of his stunning black and red suit coat.

Applebee is making plans to work with his girls in the summer season. “I would like to coach, but if they found someone energetic with a good background, someone younger with experience I would not think hard about letting them take over the program.”

“It was a hard season for everybody. The girls did not like giving up games. They bonded together to be a team, and had a good mental attitude. I think we really improved on that. The seniors never won a game in high school. To build program back we need to keep our seniors playing,” he added.

Assistant coach Colleen Hendricks “was a tremendous help. She pretty much did the entire last week,” Applebee said after being out sick (not COVID).

“We played one game, where we hadn’t touched a ball in two weeks. They stepped up and played hard (at Telstar),” Applebee said.

Wiscasset girls were planning to play in a tournament play-in preliminary game, but one girl had a concussion, another a suspected broken rib, one a family commitment, and one had to work, leaving just four girls to play.