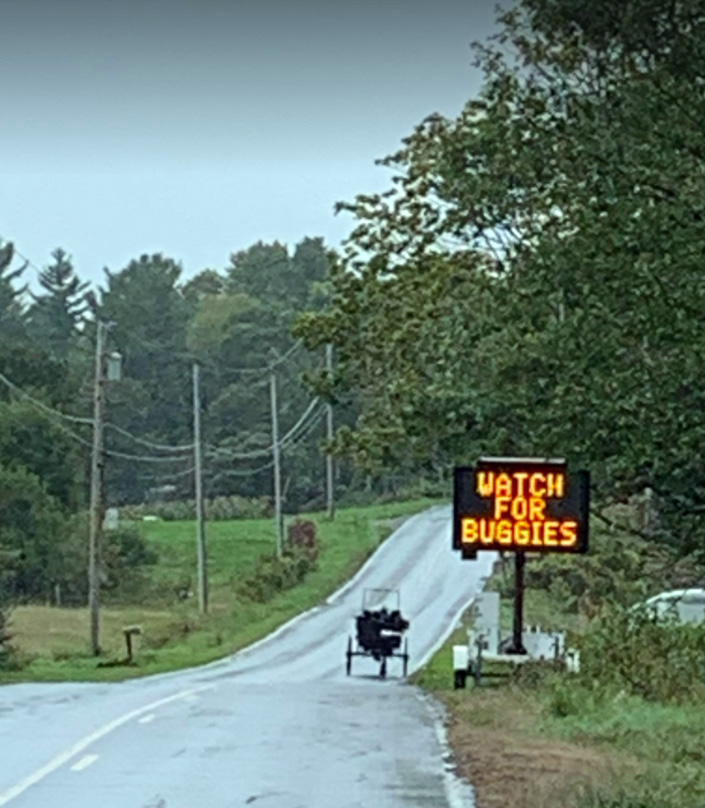 A new road sign in Whitefield and a horse-and-buggy. (Photo courtesy Mary Dunn)

Whitefield and Lincoln County Sheriff’s Office are working together to make Whitefield’s roads safer for everyone who uses them. I for one am overjoyed by this collaborative and important effort.

While this photo of a new sign was being taken it was rainy and overcast. I had just gotten off the phone with the Whitefield town office and the Lincoln County Sheriff’s Office. We discussed several new measures to improve the safety of our roads. Road signs in two locations and the painting of street lines on several Whitefield streets have been implemented. I live on one of the streets that now has new lines painted on it. To be honest some of us who live on the street were not too happy about it. But if this works at making our roads safer, then it is worth it.

In the past several weeks there have been several buggy accidents. But those weren’t the only things that led to these decisions. There are young drivers who learn on and use our roads. Their families and friends hope they are traveling over safe roads with safe drivers on them. There are older folks as well as farm tractors and animal trailers who also use these roads. School buses, families, and commuters all use our roads. Cows and sheep cross our roads. Dogs and cats sometimes run into roads. People walk, run, bike ride, and ride their horses on our streets. As someone who walks her dog on several of our streets, I can say that many, many cars drive much too fast. While I was told that speed was not the only deciding factor behind these changes, it is something I hear many Whitefield folks discussing.

It’s not one type of car or one type of driver that drives too fast. Small old cars, small new cars, fancy cars, beat up cars, big cars, SUVs, big new pickup trucks, old pickup trucks, dump trucks, electric company trucks, moving trucks, log hauling trucks all go too fast. And as for drivers who drive too fast, they include just about all of us. Older women, young men, older men, middle-aged men, middle-aged women, young women, people driving by themselves, and people with young children in their car, all drive too fast. Unless you walk, run, ride your bike, ride your horse, or drive a horse-and-buggy when a speeding car goes by, it’s hard to understand the fear your speed has on others.

According to various websites, rural roads are less safe than urban roads. This is due to several things including the design of roads, the distance that folks who live in the country have to drive to get to places, and speed. They are winding, hilly, and have many blind spots. Many rural roads, and certainly our roads in Whitefield, fall under this description. Suggestions on how to make rural roads safer specifically address speed and how to avoid being that person who drives too fast making our roads less safe. We can leave home earlier. Give ourselves an extra 10 minutes to get to where we need to go. Put our cell phones away. Yes, people have been seen on cell phones when navigating hills, turns, buggies, and people walking their dogs on the side of the road.

Our roads are not just arteries for getting to and from somewhere in a jiffy. We all live on these roads and contribute to them being safe or not. If we all give ourselves a little more time and slow down we will help make our roads safer for all who live on and use them. Our roads travel through some of the most beautiful countryside in the state. Let’s slow down and give ourselves time to enjoy them a bit more.

Thank you Town of Whitefield, Lincoln County Sheriff’s Office, and all who take it slow driving over our town’s roads. And a special thank you to those who slow down when spotting us walking our dog. I can’t tell you how much we appreciate you for that.