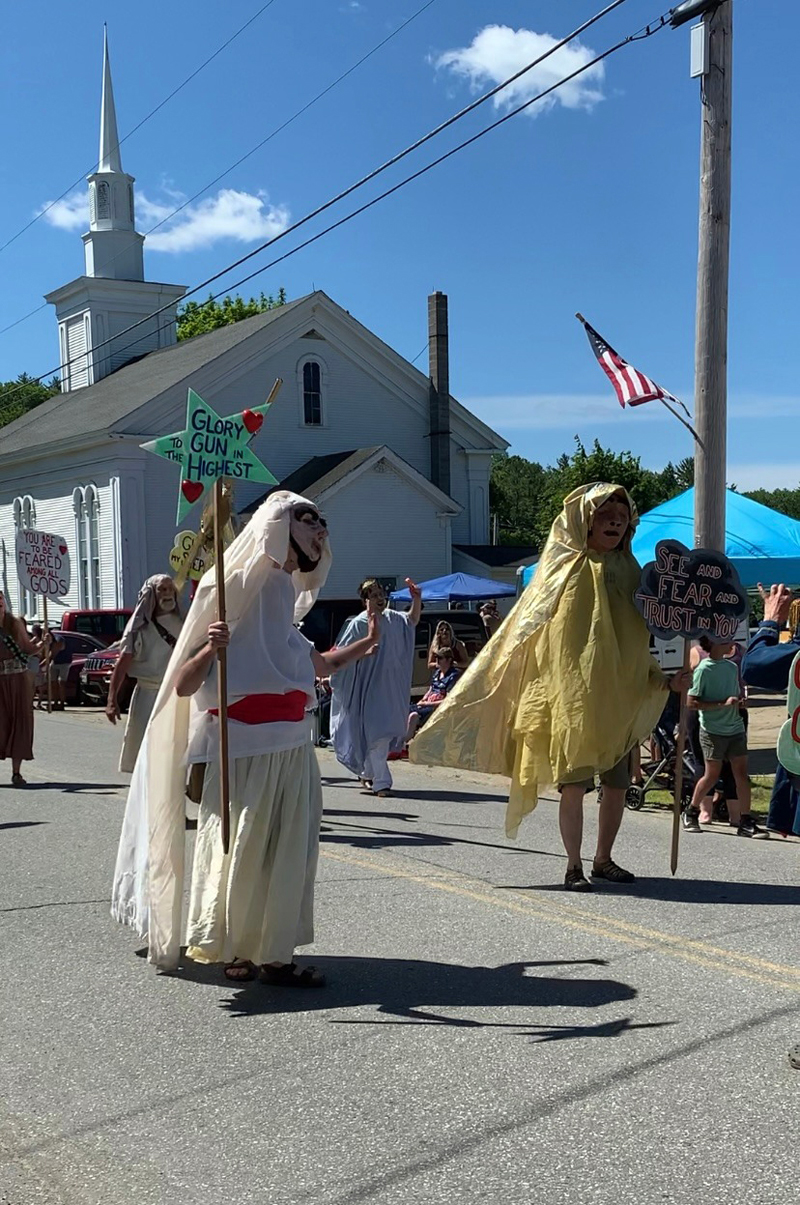 It’s been a while but summer in Whitefield seems as good a time as any to contribute a column, particularly with the return of the Fourth of July parade. In all honesty, with how things are going lately it didn’t feel like a time for celebrating but it’s been two years since Whitefield had their parade and I was curious to see what it was like.

Pulling up to the field to park for the parade we were greeted by the smell of newly mown hay. It is a favorite summer scent, so walking across the field was a treat. People seemed happy to be out and about. It was a glorious day and it certainly has been a while since many of us have done something with the community. There were folks making French fries and hot dogs. Great music filled the air and there were lots of kids in strollers and well behaved dogs on leashes. The mood was relaxed and happy, something I haven’t seen for quite a while.

As the sound of sirens announced the parade was starting, kids got their baggies ready in anticipation of candy being thrown their way. They were not disappointed. It was exciting to be outside in a happy group hearing and watching antique cars and fire trucks go by. They are usually the backbone of small town parades and it felt “normal” again. It was nice to see the library, food pantry, and the Maine Strawberry Queen Pageant represented. The “We Get by With a Little Kelp From Our Friends” float was creative, colorful, and clever and the Elvis Presley float was fun. My husband and I got a kick out of Uncle Sam riding his lawn mower.

Bringing up the end of the parade was the anticipated display by local artist and activist, Natasha Mayers. I admit that I wanted to see what she had up her sleeve this year. She told me she has been doing artistic skits like this in the Fourth of July parade since 1985. That is a lot of dedication and creativity. This year there were certainly many issues for her to choose from. For obvious reasons she chose to highlight our country’s gun culture. Her comparison to the worshiping of the golden calf when Moses was up on Sinai was clever and powerful. The silence of the audience as they passed by was deafening. I assume I am not the only one who thought that it took some major guts to address this at a Fourth of July parade in a small rural town in Maine where many folks own guns and hunt. But that’s the thing, this wasn’t about hunting or the guns used to hunt. It really never is about that. The performers made it clear that this was about the culture that enables easy access to military style weapons and the harm they have caused to so many communities across this country. It’s probably pretty safe to assume that many in attendance agreed with her and many did not. Yet it caused us all to pause and reflect. The true pleasure to witness was the respect from everyone as they watched and thought about the skit as it walked by.

Recently I was talking with a neighbor. Her husband owns a gun and hunts. We were discussing the frequency of gun shots we hear as well as how often cars drive fast on our road. She said it didn’t used to be this way. We were discussing this because we could hear the firing of what her husband confirmed was an AR-15 and she wondered if it was safe to go outside to water her garden. That reminded us of a day this past fall when my husband was on the roof as three bullets whizzed over his head.

After Sandy Hook many thought that would be the event to push forward a sane conversation on military style guns and easy access to them. But no. My older brother, whom I love and look up to, is an avid gun owner. We were driving together shortly after Sandy Hook so of course we talked about it. He listened to me and I listened to him. We agreed on some things and disagreed on others. As time went by and it was clear that nothing was going to be addressed, there was something we both agreed on and that was that the soul of this country had been lost to those in power who enabled this gun culture to envelope our nation. We both wondered, and continue to wonder, what it will take to guarantee that our children will be safe at school and we and our neighbors will be safe at church, grocery shopping, and walking down the street.

In chatting with Natasha she told me that she knew they needed to highlight how this type of gun culture is worshiped in this country. Our country is unique for this. We know that large corporations make obscene amounts of money selling guns and other military style weapons at home here in the United States and abroad in places like Ukraine and Mexico.

So, for the continued tenacity, creativity, and bravery you showed and for trying to push this conversation forward, thank you Natasha.

Have a safe and happy summer,

P.S.: As I was submitting this column a friend from Illinois texted me to tell me that their Fourth of July parade was canceled just as they began to march because in a neighboring town someone had fired an assault rifle into the parade, killing at least six and injuring dozens. This is, yet again, what is causing the dire need for life-saving conversations and actions regarding the changes that are desperately needed.