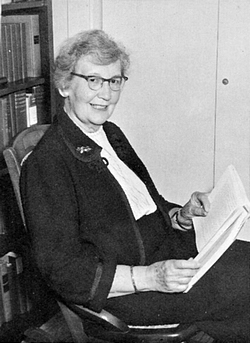 As this year’s National Poetry Month draws to a close, what better time to revisit the celebrated work and life of a Bristol native, poet Abbie Huston Evans, 1881–1983.

While now her name most often appears on lists of “poets whose works should be better known,” during her lifetime she was admired and praised by leading critics and writers, including Maine’s own Edna St. Vincent Millay, and the award-winning Richard Wilbur, the second Poet Laureate of the United States.

It was not until she was nearly 80, however, that she won the prestigious Loines Award for Poetry and that her third collection, “Fact of Crystal,” was selected for the 1962 National Book Award for Poetry.

A slender book of just 37 poems, it had taken her over 20 years to write. “Words have to ripen for me,” she once explained, saying she was satisfied that two or three poems a year was “a perfectly respectable” rate of production.

In awarding her an honorary Doctor of Letters degree, also in 1961, Bowdoin College asserted in its commendation that “her poetic imagery, derived from stern Maine landscapes of childhood, has been disciplined and defined by New England heritage and education.”

In her preface to Evans first (at age 47) collection of poems, “Outcrop,” in 1928, Edna St. Vincent Millay wrote, “Read these poems too swiftly, or only once, and your heart may still be free of them. Read them again, with care, and they will ever lay their hands upon you.”

In 1982, the year of Evans’ 100th birthday, Down East Magazine honored Evans by publishing a feature story on her life and work in its February issue, and many other essays and appreciations of her work have appeared in recent years.

Locally, the Huston name has been long known on the Bristol peninsula, her mother’s family having first settled there in the 1730s. For example, Huston Landing, a local nature reserve, is situated south of Huston Cove, close to Hog Island.

The historic Huston House (now The Downeaster Inn) stands a mile south of downtown Damariscotta, on the east side of Bristol Road, just south of Huston Cove Road. The oldest section of that house, which extends from the dining room in the front “to the second lilac bush along the side,” was built in 1790 by Robert Huston, the first Justice of the Peace of Lincoln County.

The Hustons were one of the first families to settle the peninsula along the river from Damariscotta, and built several other houses along Bristol Road.

As a teenager, however, Evans moved from her native Bristol with her family to Camden, where her father would serve as pastor of the First Congregational Church for the next 25 years. She claimed that she first realized her desire to be a poet when she heard her father read from William Wordsworth’s “Ode: Intimations of Immortality” one Sunday as part of his sermon.

Fate set back her plans, however, when she was 18 years old; an illness that threatened her eyesight kept her from reading and writing for 10 years. She spent a great deal of her time outdoors, in particular walking the Camden Hills with a younger friend who was her pupil in Sunday school, Edna St. Vincent Millay.

Evans became the life-long friend of both Millay and her mother, Cora B. Millay

Recovered at last from her  eye infection, she entered Radcliffe College at age 28, graduating with a B.A. (1913, Phi Beta Kappa) and M.A. (1918). She went to France with the Red Cross during the last months of World War I, then came home to become a social worker to coal miners in Colorado and Pittsburgh.

She later taught at the Settlement Music School in Philadelphia from 1923 to 1953, and at the College Settlement Farm-Camp in Horsham, Pennsylvania from 1953 to 1957, but until her death she returned to Bristol and Damariscotta each summer during her vacations.

Louise Bogan, noted poet, literary critic, and poetry editor at the New Yorker from 1931 to 1968, published Abbie Huston Evans poems and championed her work, declaring in 1969 that her poems were the “most unjustly neglected of the last quarter century.”

Bogan wrote, “in Abbie Huston Evans’ “Fact of Crystal,” we discover something intense and rare – mystic apprehension. Miss Evans’ body of work is small… and her utterly distinctive quality has gone virtually unnoticed. Yet here is a New England woman… whose sensitive and strong perceptions pierce deep into the heart of things, whose sense of ‘inscape’ can be set against Hopkins’ and Dickinson’s. Her Welsh inheritance (her father, Welsh by birth, migrated to the United States to eventually study for the ministry at Bangor Theological institute), grounded in the stern landscapes of her childhood, has been disciplined, and defined, given grandeur and depth. These later poems, written in her sixties and seventies, include work of such profound inspiration that small modern categories and classifications fall in confusion before them.”

Abbie Huston Evans work will be featured among an all-star cast of Women Writers of Lincoln County, a summer exhibition by the Lincoln County Historical Association at all three of its historic sites. Visit lincolncountyhistory.org for more details, and watch this column for more profiles of featured authors of the exhibition.