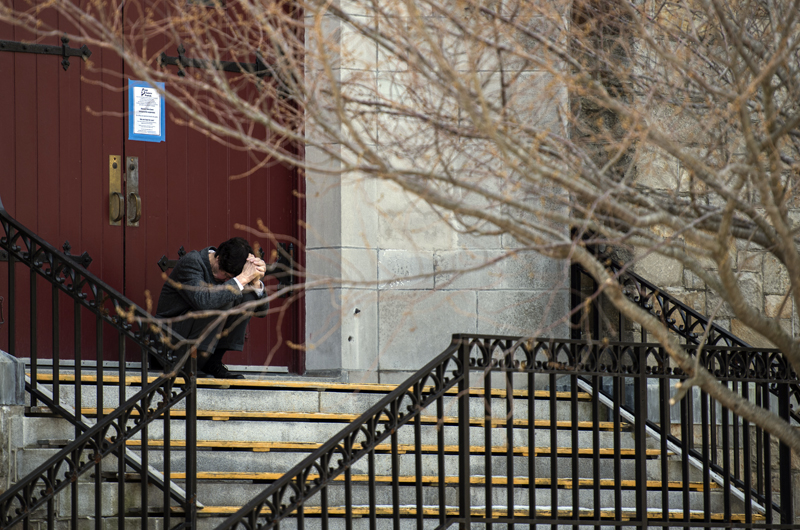 A man prays on the steps of St. John the Baptist Catholic Church in Brunswick on Easter Sunday, April 12. (Bisi Cameron Yee photo)

This is my Easter story.

Up early this morning to get to St. John the Baptist Catholic Church in Brunswick to photograph the Easter Mass. St. John’s is not in Lincoln County, but power outages prevented the service from taking place in St. Patrick’s in Newcastle. St. Patrick’s is the historic church that I have been photographing.

St. John’s is gorgeous, like a baroque chapel airlifted from Italy to Midcoast Maine. I took pictures of stained glass, gold chalices, white linen, fresh lilies, dark wood. When the service started, I photographed the readings, the music, the deacon and priest as they performed the rituals of faith.

I’m afraid my photos are fairly straightforward – pretty because the place was pretty – but not inspired. And I missed a few opportunities. When Father Patrick Agbodi raised the host to bless it, I was unable to capture his face and the image doesn’t read as powerfully as it should. When the deacon poured water from a vessel to rinse the chalice that had contained the blood of Christ, the sun broke through the stained-glass window behind the altar and made the glass vessel shine like a diamond. My camera was at my side and did not capture it.

But I have some that I like, I think – Father Agbodi reaching for the Bible as he prepares to stand and preach, the gilt edge of the holy book gleaming. The reader standing at the podium, a large candle flickering in the foreground and a statue of Mary observing in the background. After the service when the candle was snuffed out. And the parish clerk and the deacon’s wife carefully sanitizing the microphones and benches.

After it was over, I stayed to photograph the exterior of the church, walking several times around, changing lenses to capture both the imposing presence of the church and the elaborate details of the stonework. As I was getting ready to leave, I noticed a pickup pulling into the lot. A tall man in what can only be described as a “go-to-Sunday-meeting” suit walked purposefully toward the front of the church and disappeared. I was standing on the long side of the church, the side with the only unlocked door, and when he didn’t return, I walked around to take a look. He was there, sitting on the stone steps, head bowed, hands clasped. I raised my camera.

This is one of the ethical dilemmas photojournalists face – take the picture, document the moment, or respect the privacy of a man as he talks to his God. Perhaps if this had been another time, I might have made a different decision. But Easter Sunday 2020 was not the norm. A picture of a man praying outside a locked church with a sign above his head that reminds us of the reason the church is closed is a photo that documents a small but important piece of this much larger story we are all living in.

I depressed the shutter.

I walked around the building twice and changed lenses again. He prayed for about 20 minutes as I photographed him from across the street, not wanting to intrude but wanting the picture.

I waited by my car for him to return to his truck and when he did, I approached him. I asked him what brought him there, what drove him to pray, what he prayed for. We talked for 40 minutes. He was not Catholic; he said he was not religious, he was spiritual – but he had not missed a Sunday service since 1998. And then he told me about the woman who broke his heart and said he prays for love.

I was upfront with him about who I was and said I had taken the pictures. We discussed the ethics of the situation in some detail and he told me about how he had prayed there, in the same place on the steps of the church, three weeks ago and looked up to find a photographer crouching down to take his picture. He described the lurch he felt in his stomach. But he also said that he chose to pray on the front steps of St. John’s. This was, in fact, a public act, not a private one. He wanted the people who walked by to see him there and perhaps consider their own relationship with God and religion. When I asked, he gave me his name and his blessing to use the images I had taken.

And then he answered my first question – about what brought him here, what drove him to pray. “This isn’t a time to give up.”

“Peace be with you,” he said, as he turned away and opened his car door.

“And also with you,” I replied.

One final detail about this encounter that struck me and stays with me – the man was a carpenter.

As I drove out of the parking lot, I noticed a car parked at the back of the lot and another one on the street in front of the church. Each vehicle was occupied by a person whose head was bowed in prayer.

(Bisi Cameron Yee is a photojournalism intern at The Lincoln County News.)