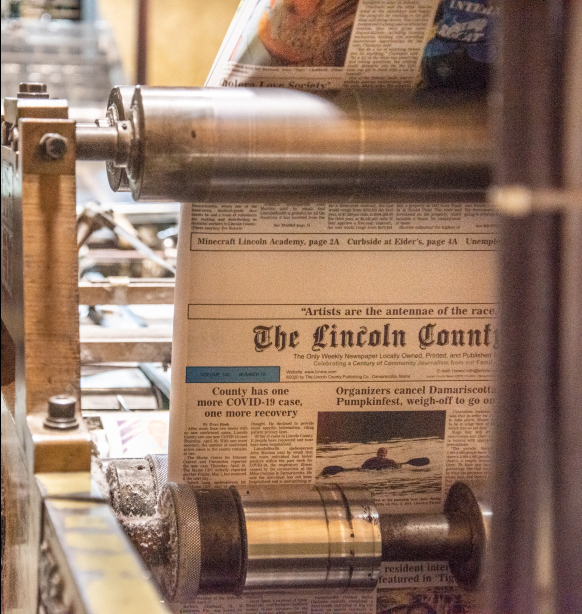 The Lincoln County News goes to press in Newcastle on May 6. (Bisi Cameron Yee photo)

March 16: The Lincoln County News is an old paper in a deceptively vast old building. With old dust. Lots of it. But it has the same wooden stairs that I used to climb in my grandmother’s house in Bristol. Paper dust, dry wood, and cold air mix and combine into a smell that makes my nose itch with nostalgia. I set down my bags and camera, furl my coat and place it on a shelf.

The camera is having none of it.

So I sling the strap over my shoulder and go in search of the reason I am there: the big press, the one that prints the paper. This is the moment that everything I have been working toward back at school in Asheboro, N.C. coalesces into something real.

The great white rolls that feed into the machine are the size of baby elephants. The press stands, already threaded, reams of paper stretched out high over my head waiting for Wednesday, when an embroidery of ink will stitch a tapestry of the county’s news. I take a picture.

I sat in on the reporter’s meeting at 9:30. The key coverage directive is, of course, responding to the coronavirus news. The first confirmed case in Lincoln County has been identified as a female health worker.

Evan is given the task of digging for any further information. Alex is covering the town meeting cancellations happening around the county. Jessica has a sore throat and is working from home.

My assignment? Go find pictures that could run with pieces on the virus: “closed” signs, restaurants sanitizing surfaces, empty meeting spaces. There are rumors that LincolnHealth will be setting up a testing site. See if I can get access.

Then out the door, walking the main drag of Damariscotta, photographing store windows. The library is closed, several restaurants. The bookstore and cafe are still open. They have a “keep calm and wash your hands” sign in the door. I take a picture. The bakery has copper tables. The staff explains the virus only survives for four hours on copper, but they still sanitize after every customer. I take a picture.

March 18: Three pictures on the front page are mine. Noticed that none of them have people in them. That is either a comment on the times or a comment on my photography.

March 19: I received the following email from my school: “Per guidance from the NCCCS (North Carolina Community College System) all work based learning classes must be stopped immediately.” My internship only lasted three days. Didn’t matter by then – I was in it. 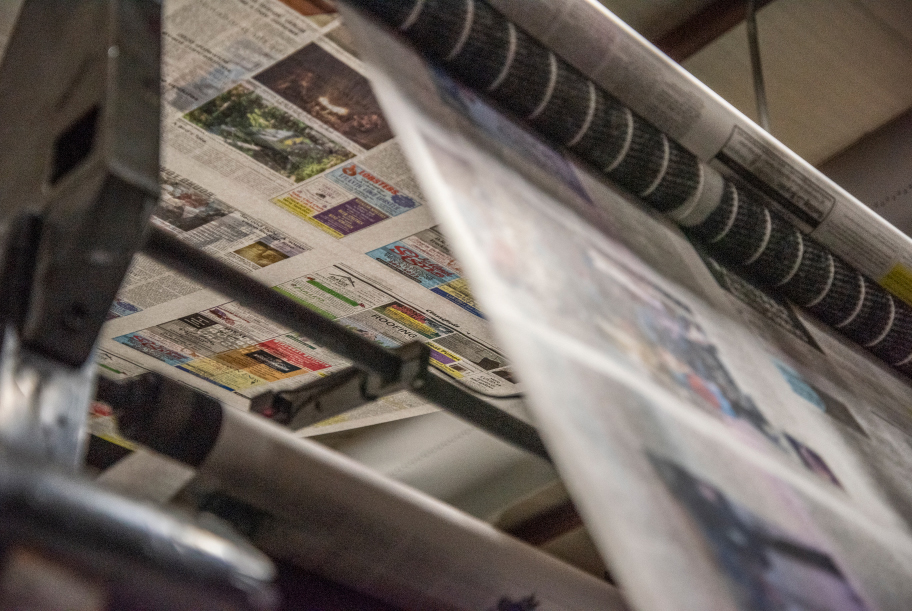 The Lincoln County News works its way through the press in Newcastle on May 6. (Bisi Cameron Yee photo)

March 26: I am struggling to cut down my submission from the N.C. Hunt sawmill in Jefferson to a manageable level – places like that are like candy shops to photographers. Which pictures are the ones that tell the story? Which ones are the “musts?”

But I have the scramble of cars lining the tiny dirt road. I have the nets being tossed, towed, pulled, hammered, torn, inspected, and tossed again. I have burly Native American fishermen smoking and joking in wetsuits and rubber overcoats. I have the river cascading toward the distant pines. And I have the nets full of grubby-looking sandworms interspersed with the glimmering transparency of the baby eels.

The fishermen said it was cold last night. One of them fell as he adjusted his net in the water. He was pretty vehement about just how cold it was.

March 31: Today felt important. I want to remember it, how it looked, how it smelled. How the wind hit me in the morning on the banks of the Pemaquid River, how my hands felt frozen in my thin gloves. How the afternoon light enveloped and inspired me on the grounds of St. Patrick’s in Newcastle, how I drank in the color and the warmth. How the emotional need of the clients at the group home I photographed flowed out of them and swirled around me as I focused and depressed the shutter again and again. How it impacted me. How it filled me. What it meant.

April 4: This was the first day that I really saw masks – not everyone, maybe 25% of the people waiting in a line for curbside pickup in Wiscasset.

April 6: I found myself in Whitefield in a sky blue room with an Amish woman wearing a bright blue dress and a dark blue bonnet. Her cheeks were rosy and there were jars of red and orange preserves, and braided rugs in shades of cream on the shelves behind her. There was beautiful window light. But the Amish people prefer not to be photographed. So I settled for an Amish horse. 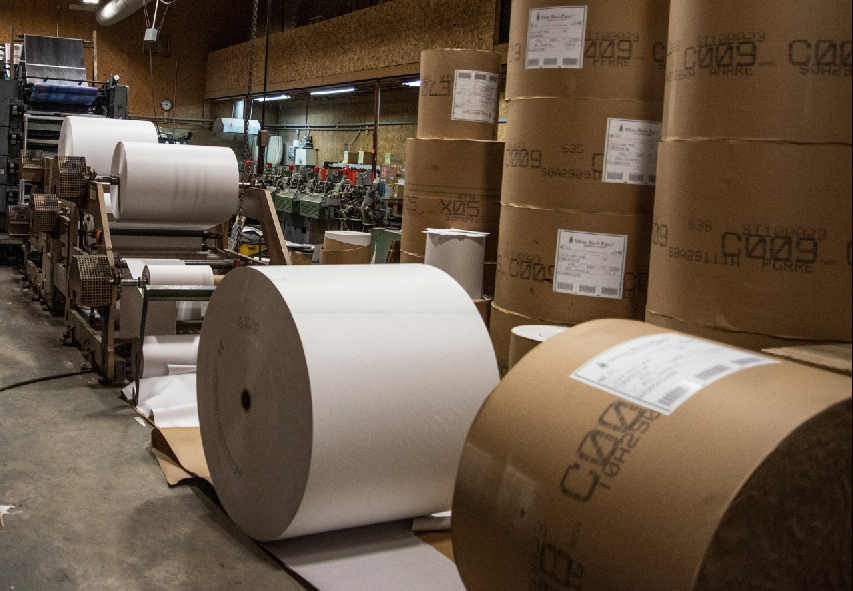 Large rolls of paper feed the press at The Lincoln County News in Newcastle on March 16. Everyone in the print shop pitches in when the presses run to ensure the print edition reaches newstands Wednesday afternoon. (Bisi Cameron Yee photo)

Then I headed as far north as Lincoln County goes, a wedge-shaped bit of land called Hibberts Gore, population: one. My GPS at a certain point informed me that I was there but all I saw were trees, cattails, a tumble-down shack that was probably what was left of the house that Hansel and Gretel found back in the day, and a small cemetery with two gravestones – I took a couple photographs. I hope they weren’t Hansel and Gretel.

April 10: We had a major storm overnight – 6 inches of heavy snow. Thought I’d head into Damariscotta, then maybe down to Bristol to catch some snow-filled elver nets because I felt as if that could make some uniquely beautiful images. Didn’t get far. My Prius has North Carolina tires.

April 15: This afternoon I got lost. I had gone to Nobleboro because the tiny general store there was giving away masks and I thought I could get one while documenting another aspect of small-town COVID-19 response. They were out of masks. So no mask, no picture, and then I took a wrong turn somehow and it was sleeting and I just wanted to get home – until I saw baby cows on the side of the road.

April 21: Spent three days photographing nine different fire departments stopping by LincolnHealth’s Miles Campus to show their appreciation for the medical personnel and support staff. This is the kind of photographic opportunity I’ve been waiting for – colorful, visually interesting, speaks to the times and to the community, important. Reminds us that we’re all in this together.

May 10: Submitted some images to the National Press Photographers Association monthly clip contest. I can do that now, because I actually have published photographs.

May 11: I spent eight weeks doing a job that people dream about. With the paper focused on coverage of the virus, the editors and reporters swamped with work, the traditional avenue of photojournalism shut down – no sports, no live events – I was left by and large to my own devices. I photographed everything I saw, everyone I met. I looked for pictures that spoke to the crisis we were all suddenly confronted with: masked faces, gloved hands. Closed signs on restaurant doors. Open signs on essential businesses.

But I also photographed things that spoke specifically of hope. Gamboling lambs and newborn chicks for the Easter week edition. Green things and growing things. Churches. Children and dogs – the photogenic meat and potatoes of feature hunting. Flowers. Smiles. The workspaces of Lincoln County artists. The fields and greenhouses of Lincoln County farmers. The humor and grit of Lincoln County fishermen and fisherwomen. And I was incredibly fortunate to witness and document the dedication of Lincoln County’s essential personnel at fire departments, grocery stores, food pantries, gas stations, medical facilities.