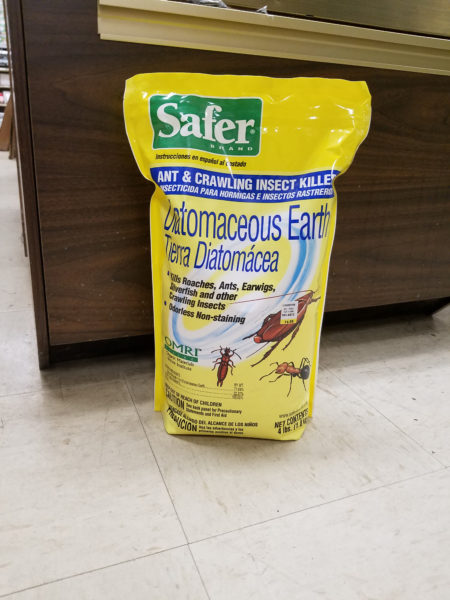 Safer brand diatomaceous earth is one of a number of brands of the product available in the area. (Sarah Caton photo)

I don’t know about you, but this time of year tends to bring out my green thumb. (Disclaimer: that may be a bit of an exaggeration, my thumb is more of a celadon color, at best.)

I want to see bright tones and vibrant blooms and to pretend I’m the one causing the Earth to rejoice in brilliant colors and verdant life.

Unfortunately, I’m not the only one creating new life.

Bugs and pests of every shape and size appear to teem forth from the Earth as if they’ve been cooped up underground forever and have just now discovered that the surface offers lots of juicy things to eat.

Many of these insects and arachnids are actually beneficial – bees pollinate plants we can’t do without, in addition to giving us honey (and an occasional sting, if we’re not careful). Ladybugs are not only pretty, with their speckled backsides, but they provide pest control with their willingness to eat other less-helpful insects. Spiders, although creepy and reviled by many (including this author), also get rid of insects whose only goal in life seems to be to irritate mammals.

Then there are fleas and ticks: the bane of people and pets everywhere. There are countless products on the market to eradicate these vermin, but not all of them are effective – or safe – for us, our pets, or the Earth. Tried-and-true remedies for insect removal can be handed down from generation to generation, but the ones that damage the Earth and its inhabitants the least are the most preferable. Diatomaceous earth is one of the most effective, natural ways to get rid of those pesky parasites without the use of pesticides.

Diatomaceous earth — or DE — is a naturally occurring product that is composed of the fossils of tiny aquatic creatures called diatoms. According to the National Pesticide Information Center, DE absorbs the fats and oils from an insect’s exoskeleton, causing them to dehydrate.

Because the fossils in DE are pointy and sharp and nearly microscopic, they are small enough to puncture the exoskeletons of insects, which speeds up the process. The edges are so tiny that they do not cause harm to humans or animals, though inhaling the powder can cause some lung irritation, as is true with any powdery substance (even flour). It’s always a good idea when spreading diatomaceous earth around your property to let the dust settle for some time before allowing kids/pets/yourself near it.

Diatomaceous earth is safe enough in some forms to be used in foods. There is food-grade DE, which is used as a caking agent in many products, and farmers use it in their grain stores to kill insects that would otherwise decimate feed.

The food-grade variety, as one might imagine, can be ingested. There are all sorts of claims that it does everything from removing metals and toxins from the body to slowing down aging. Although I have no idea if the ingested variety can make me look younger, I do know that any form of DE that kills fleas that would otherwise be on my cat, or bugs in my garden that would otherwise kill my crops, will definitely cause less stress and therefore less aging.

The non-food-grade variety of DE appears to be less than 100 percent silicon dioxide – though the makers are unclear as to what the other 22 percent in the package I’m looking at actually is. I would hope (and perhaps this is just optimism) that it is also organic and nontoxic. The instructions do say you can use it indoors as well as outside, and that it is only a moderate irritant to eyes and lungs, so let’s hope my optimism is not unfounded.

I have seen diatomaceous earth come in everything up to a 10-gallon pail, but the most common size seems to be a 4-pound bag. The friendly folks at Louis Doe Home Center in Newcastle have a 4-pound bag available for a price comparable to online, and you get the added bonus of personal service and knowledge, as well as a friendly smile.

There are several other locations where you can pick up some DE. The Animal House in Damariscotta has a variety that says it’s formulated to put on your pet, though it’s not for ingestion. Damariscotta Hardware has a 4-pound bag available; however, it isn’t food-grade either.  Ames True Value Hardware & Supply in Wiscasset has several varieties, both food-grade and non-food-grade, and the store even has a 40-pound bag, if you need that much! Rising Tide Community Market in Damariscotta has available a 2 1/2 bag that is food grade. Other garden centers such as Moose Crossing Garden Center in Waldoboro are also a good place to check, too.

As with any product, it is best to do your own research and read all the directions before using it. However, as a natural product that is not overtly harmful to pets or people, I would say diatomaceous earth is a good place to start when attempting to get rid of insects that would otherwise cause harm to plants and animals alike.

(Sarah Caton owns All Paws Pet Sitting, which serves all of Lincoln County. She writes the monthly “Paws for Thought” column in The Lincoln County News.)