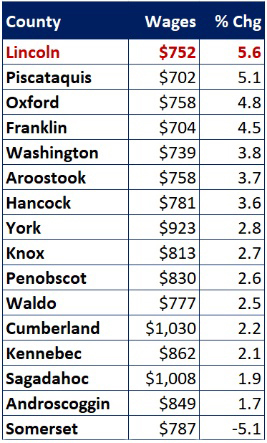 Lincoln County leads all Maine counties in the growth of the average weekly wage, at 5.6%. (Source: U.S. Bureau of Labor Statistics)

While the growth of wages across Maine has plateaued recently, workers’ pay in Lincoln County is growing faster than in any other county in the state.

Every quarter, the U.S. Bureau of Labor Statistics publishes the job data for states and counties across the country. The latest report, through the end of 2018, shows that Lincoln County led the state in the growth of the average weekly wage. That 5.6% increase in the growth of wages is higher than any other county in Maine.

From 2013 through 2015, Maine led the nation in the growth of the average weekly wage, but following the passage of the statewide minimum wage referendum in 2016, wages dropped and Maine fell to 40th among states.

The number of people employed in Lincoln County rose by 2% in 2018 as well. Only three other Maine counties did better in that area.

More jobs, higher wages. This is great news for workers in our county, since wages grew more than three times faster than the rate of inflation in 2018.

(Sen. Dana Dow, R-Waldoboro, represents all of Lincoln County except Dresden, plus Washington and Windsor. He serves as Senate minority leader and sits on the Marine Resources Committee.)