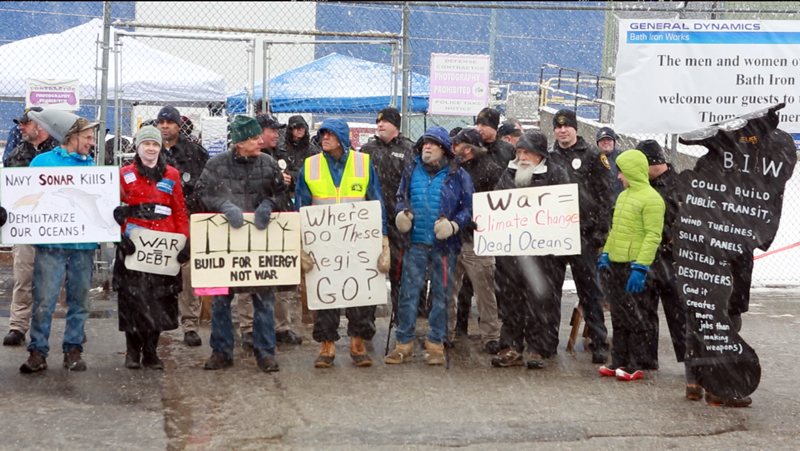 I got arrested with eight other activists on Saturday during the snowstorm at the Bath Iron Works destroyer “christening” for committing an act of non-violent civil disobedience. We were there to further community reflection and discussion about steps we can take to deal with climate change and endless war-making. We’ve been trying for years to get BIW to convert to making commuter rail systems, wind turbines, solar panels, tidal power systems, hospital ships, etc. Sustainable technology development employs many times more people than building warships does. I wore two giant carbon footprints. The one on my back said: “USA military largest carbon footprint in the world. Making warships accelerates global warming and drains our economy of money for health care, education, infrastructure.”

I felt especially moved to be there because these are the ships now being stationed in Jeju Island, South Korea, where I went several years ago. As part of the U.S. pivot to China, to monitor the South China Sea and threaten China, a base was built in the most beautiful, pristine little village of Gangjeong, its volcanic coastline now blasted away, its access to the sea blocked by high walls and barbed wire. BIW continues to make these deadly Aegis missile defense systems and I was in Bath to protest the newest one.

One of the Aegis 9