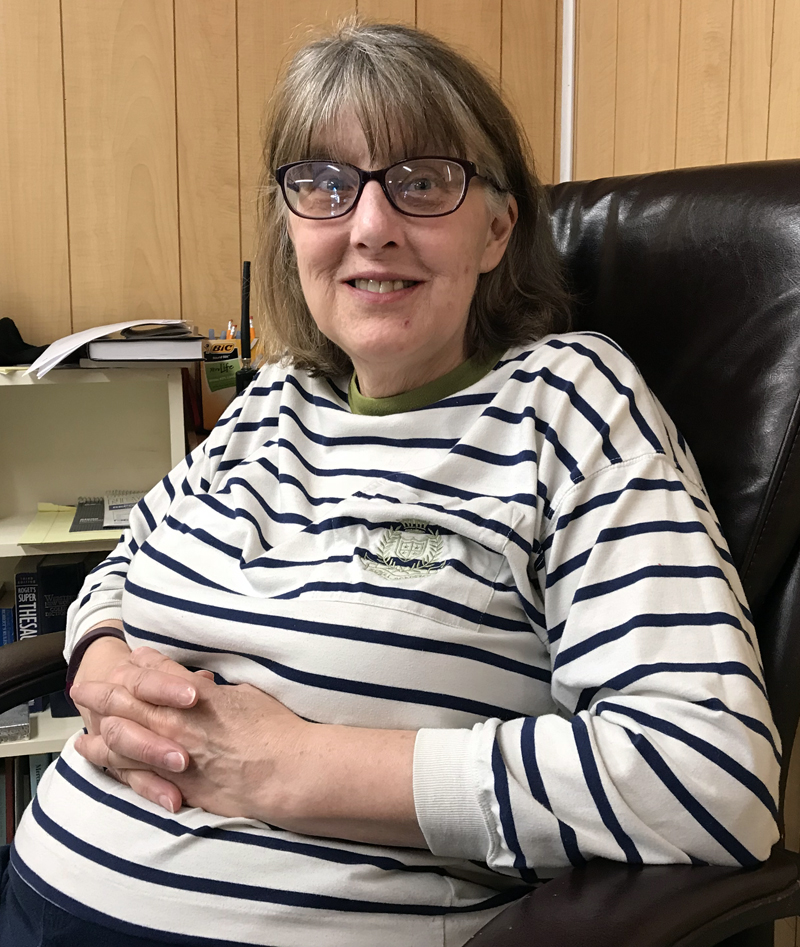 Here’s a Mother’s Day quiz: what’s harder than being a mother?

How about being a single mother to foster children?

Laurie brings a prestigious academic background to the LCN. A native of the Boston suburbs and graduate of Wellesley College and The Ohio State University, she taught private school for nearly 20 years – mostly Latin with some math.

Laurie has a long connection to Maine and Lincoln County. When she was a girl, her family would visit friends at their camp on Sheepscot Pond. For 25 years, she worked summers at a camp for girls in Monmouth and would often visit the area on days off.

She eventually moved to Nobleboro and started work as a teacher at Lincoln Academy in the fall of 1980. She taught Latin and math, and spent her final year at LA cataloging the school’s archives.

She started work at Lincoln County Publishing in 1995. She was hired to design classified and real-estate ads, but her job has evolved over the years.

Today, she designs and lays out books and town reports, business cards and flyers, and plays a crucial role in the layout of the newspaper Tuesday and Wednesday.

“It was a welcome change to do something really different,” she said, and she continues to enjoy the variety of the work.

But let’s back up a few years.

In the fall of 1988, while still a teacher at Lincoln, Laurie decided to become a foster mother.

She comes from a large family with much younger siblings, so she had a maternal role at home and later at the girls camp. “It was just something I’d always been interested in,” she said.

She took courses through a private program for foster parents, which gave her information to the Maine Department of Health and Human Services.

“I got a call on a Friday and my reaction was, ‘Oh, you want some more paperwork,’” Laurie said, but they didn’t. “They had a placement for me.”

“My brother was up and all of a sudden, over the weekend, we have to get the house ready for a child, arrange day care, everything else,” Laurie said. She met her first foster daughter, Natashia, on Monday and welcomed her home the next day.

“It was, yes, an adjustment, but my family and friends immediately accepted her as part of my family, part of their family, and that made it loads easier,” Laurie said.

Laurie and Natashia built a strong relationship, and Laurie adopted Natashia when she was in fourth grade.

Laurie would go on to provide a home for three more foster daughters – Jackie, Laura, and Tiffany – and briefly a fourth.

“They progressively got older because finding homes that will take older children is difficult,” Laurie said.

Laurie is extraordinarily active in the community and was no different as a foster parent. She was a Girl Scout troop leader for many years, at every level of Scouting, and all the girls joined.

Of course, foster parenting had its challenges. Foster parents don’t know all the details of a child’s background, and foster children often have experience with abuse or neglect.

“You have to kind of just go with it and see what you can learn,” Laurie said. “Things will come out as your relationship develops.”

Other challenges are universal among foster parents and others.

“Thirteen-year-olds don’t get along with their parents at times, no matter what,” Laurie said.

The biggest reward of Laurie’s time as a foster parent was becoming a mother to Natashia and watching her grow up.

After graduation from cosmetology school, Natashia worked at and eventually bought a salon in Boothbay Harbor, Aura Hair Design, which she continues to own and operate.

Laurie is immensely proud of her daughter, whom she describes as thoughtful and a hard worker.

I asked Laurie if she has any advice for a new mother – foster or otherwise.

“You need to be sensitive and understanding of each child as an individual and what he or she needs, how they’re developing, and support that,” she said. “Even if it’s something you don’t necessarily agree with, if it’s not dangerous, support it. The individuality is really important.”

She urges mothers to “enjoy the experience” of motherhood. “And don’t be afraid to ask for help.”

Laurie’s days as a foster mother are over, but she encourages others to consider it and talk to past and present foster parents about their experience.