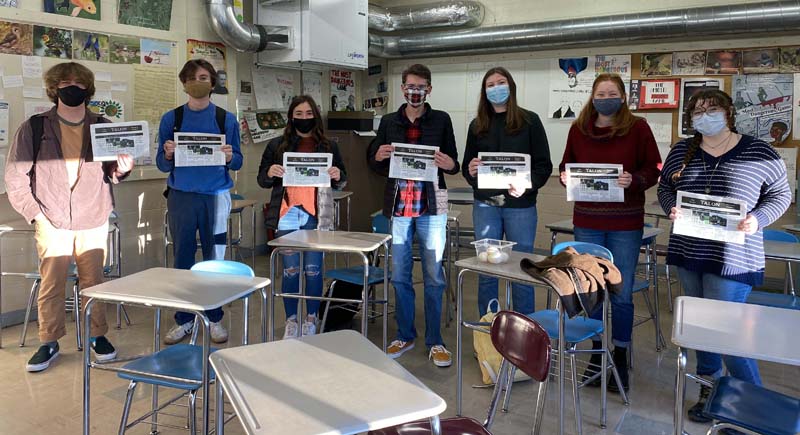 The Eagle’s Talon, Lincoln Academy’s student-run newspaper, began its life in the ‘90s and Associate Publisher John Roberts served on the staff. Students produced everything in the paper, from front-page news articles to the popular “Vehicle of the Month” feature. And there’s only one physical copy Lincoln Academy and The Lincoln County News have been able to find.

That’s all we know, literally. We do not know how many editions of the newspaper there were, how regularly it was printed, or when it ceased publication.

What we do know, however, is that it’s back. And based on the energy of the students in LA’s student newspaper club, it is likely going to stay for a while.

The Talon’s resurgence came about due to the school’s introduction of Focused Learning Blocks at the beginning of the academic year. These 40-minute blocks provide students the opportunity to work on independent projects, seek academic help, and participate in clubs and other activities.

Jenny Mayher, LA director of communications and community engagement and lifelong supporter of the free press, wanted to start a newspaper for years, and plenty of students showed interest. However, it wasn’t until the introduction of Focused Learning Blocks with a focus on extracurriculars that the time became available.

Mayher enlisted English teacher Jack DeAngelis, who was excited to work with students and their writing beyond just the typical term papers and essays.

She then asked me if I would be interested in helping out and I immediately said yes. Thankfully (and unsurprisingly), the editor and publishers were all supportive.

But the newspaper isn’t about the advisors; it’s about the students. I fully admit I had no idea what to expect walking into the first meeting, but any apprehension was immediately squashed as soon as the students enthusiastically began sharing articles, features, and other content they wanted to see in their newspaper.

And I do mean “their newspaper.” The students have complete ownership of the publication, save for some news guidance and gentle reminders about deadlines from the advisors. The work they’re doing is not for a grade or accolade. Rather, they’re making a newspaper because they want a newspaper.

More importantly, however, this community needs The Talon. The day the issue arrived at school, the feeling was indescribable walking around the campus and seeing students (and faculty and staff) reading the print edition.

During a time in which social media silos users into echo chambers of their own beliefs, The Talon provides an opportunity for students to make their voices heard. It brings the LA community together the same way that we like to think the LCN forges connections in Lincoln County.

We talk about the importance of community journalism all the time, but seeing it in action is something else entirely. I’m actively looking forward to The Talon’s next edition to learn more about what our local students care about, and if you’d like to learn for yourself, go to lincolnacademy.org/campus-and-community/myla/the-eagles-talon.

If any schools are interested in starting up a student newspaper, please do not hesitate to send an email to mzewert@lcnme.com.