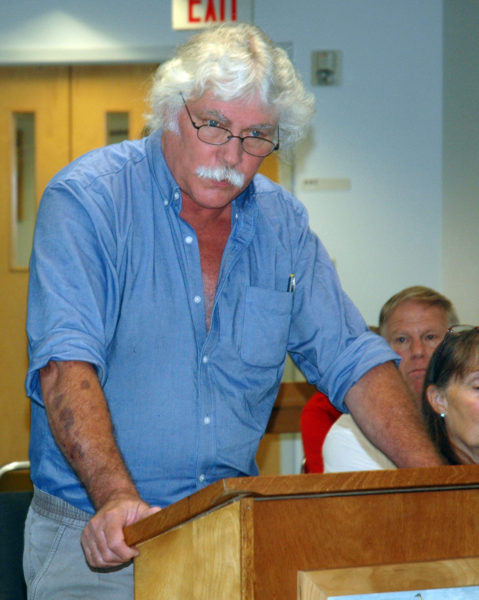 Seth Hall protests the Waldoboro Board of Selectmen’s decision not to reappoint him to the Waldoboro Planning Board during a selectmen’s meeting at the municipal building, Aug. 8, 2017. (Alexander Violo photo, LCN file)

A “political prostitute” and a “pit bull”: Seth Hall, a candidate for selectman in Waldoboro, used these words to describe Town Manager Julie Keizer in a May 19, 2019 email to Jan Visser, chair of the Waldoboro Economic Development Committee.

“Julie is a masterful, if dishonest, manipulator of people, and featherer of her own bed. In my view, she is a political prostitute, and she will do anything to ingratiate herself to the people on whom her position depends. … But Julie is not the issue here; she is simply Bob’s pit bull. He plays her like a harp, to facilitate his own ends.”

Hall’s seat on the economic development committee was his last position in municipal government. He chaired the planning board until the selectmen did not reappoint him at the end of his term in 2017. He sat on the communications technology committee until committee members requested his removal in 2016.

Hall is one of four candidates for two seats on the board of selectmen, along with Jan Griesenbrock, Margo Metrick, and Jann Minzy.

Minzy, the only incumbent in the race, has also come under attack from Hall.

In a June 16, 2016 email to Minzy, Hall claimed credit for Butler’s defeat of Selectman Ronald Miller in an election two days earlier and for Minzy’s elevation to chair in 2015. Hall had since soured on Minzy.

“You’re next to go,” he said in the email. “You know, what goes around, comes around. As ye sow, so shall ye reap.”

Three months earlier, Minzy and Miller had confronted Hall for using the planning board to air his “personal agenda,” “disrespectful behavior” toward town officials, and other issues, according to a document summarizing the meeting.

“If these issues are not remedied and we continue to receive complaints, there may be a hearing and a possible dismissal,” Minzy and Miller said in the document.

The Lincoln County News obtained these communications, and others between Hall and town officials, through a request to the town under the Maine Freedom of Access Act.

Hall, in an interview, said he regrets the “political prostitute” comment, but not his pledge to remove Minzy from office or a later pledge to unseat Butler.

“I spoke pretty plainly and I spoke as though I were speaking to my friends and colleagues, which they were – are – and I used language that was unfortunate,” he said. “One of them was a term of art, as I’m sure you know, but maybe the (town manager) and Bob Butler don’t –  political prostitute. That’s a long-used, widely accepted phrase and it has nothing to do with prostitution or women or anything else.”

“I truly regret using that expression, admittedly in anger and frustration at the (committee’s) closing of the renewable energy subcommittee,” he said.

“My sentiments were exactly and clearly expressed. Could I have used more genteel language? Maybe. But I was angry,” he said.

Keizer called the message “harassing, intimidating, and a little bit scary.” She believes there was a “sexual connotation” in the remarks.

Keizer, Butler, and Selectman Abden Simmons expressed concern about how Hall would treat town employees, especially women, as a selectman, and about legal liability for his behavior.

Hall, of his comments to Minzy, said: “That’s what politics is about.”

“Politics is a rough game, and if you don’t want to play, you shouldn’t be in it,” he said. He referred to Waldoboro politics in particular as “a dirty, dirty game.”

Hall disagrees with Minzy and Miller’s characterization of his work on the planning board and criticism from others. Former Town Manager Linda-Jean Briggs, for example, identified Hall as an obstacle to economic development in Waldoboro.

Hall said a perception of the planning board as hostile to business existed prior to his arrival, and he worked to change it. He noted that the board unanimously chose him as its leader.

“I think I was, maybe, too effective,” he said. He gave fellow members Barbara Boardman and Sara Hotchkiss as references.

Boardman, in an email, described Hall as “professional” and said he “did his homework” and sought to apply ordinances fairly.

Hotchkiss said Hall was “appropriate, kind, and pleasant” in meetings. “I learned a lot from Seth,” she said. “I thought he was an excellent planning board chair.”

Hall does have factors in his favor as a candidate. Most notably, he has backed up talk of economic development with action, redeveloping Fieldcrest Manor and bringing a call center back to the village.

But progress on town business will require cooperation among the board. Of the five current selectmen, Hall has vowed to oust two and had little positive to say about two others.

Simmons is “great with shellfish,” he said, but “has never offered anything in terms of a constructive proposal that I’m aware of.”

Of Katie Winchenbach, he said her only accomplishment has been “flags on some telephone poles.”

That leaves Clinton Collamore, whose term expires this year and who is not running for reelection. “He’s very strongly behind me running and he’ll tell you that,” Hall said. Collamore did not respond to a request for comment.

Simmons, a former state legislator who works as a fisherman and seafood dealer, defended his advocacy for the Medomak River and said Hall is “insulting to anyone who challenges his views.”

Minzy defended her work on issues such as union negotiations and said Hall “doesn’t play well with others.” Winchenbach declined comment.

The LCN does not endorse candidates, but it does try to provide voters with information they can use to decide for themselves. In Hall’s case, it would be irresponsible to inform readers of his experience in town government, but leave out what amounts to his exile from town government.

Hall said he “absolutely” could work as part of a team with the other selectmen if he wins, citing a career managing computer networks at the Massachusetts Institute of Technology as evidence.

“One of the nice things about being on the select board is, they can’t fire you. … They sort of have to sit at the table with you and talk,” he said. “And I’ll sit there as long as it takes.”