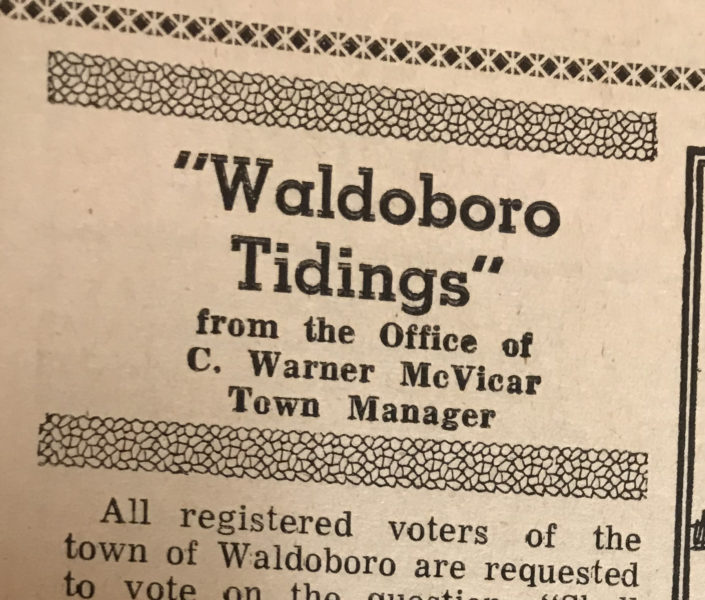 The banner for the weekly “Waldoboro Tidings” column by Town Manager C. Warner McVicar, from the July 24, 1969 edition of The Lincoln County News.

Among the many columns in the 1969 newspaper was “Waldoboro Tidings,” by then-Waldoboro Town Manager C. Warner McVicar.

McVicar wrote every week to update the townspeople on various happenings. Many of the issues sound familiar: efforts to address pollution in the Medomak River, debates about police staffing.

The columns from July 1969, among other subjects, report a proposal to spend $4,200 to boost police staffing for the remainder of the year.

The town hoped to use the funds to hire a new police chief for $115 per week and a new full-time officer for $100 per week.
Alas, the voters balked at the outlay and approved only $1,500. McVicar reported that the town would go ahead with interviews for a new chief, but would not add an officer.

There was other news too. “Anyone interested in acquiring two tame yellow and white kittens, please see Earle K. Horton, Dog Constable, at his home on Upper Depot Street,” McVicar wrote July 31, 1969.

In May, when I moderated a candidates forum in Waldoboro, I mentioned “Waldoboro Tidings” to the present-day town manager, Julie Keizer.

Julie found the idea intriguing and has agreed to resurrect “Waldoboro Tidings” on an occasional basis. Therefore, I cede the rest of my usual space to Julie this week.

Readers will find future “Waldoboro Tidings” on the Waldoboro page, just as they did 50 years ago.

“Waldoboro Tidings”
From the office of
Julie Keizer
Town Manager

In Waldoboro last week, about 14.7% of registered voters turned out to exercise their civic duty and participate in the annual town meeting by referendum vote. The most contested vote was not the election of a select board member, the passing of all the town budget articles, or even the passage of the Tax Increment Financing District that sparked debate in our community. It was the passage of a public question on the regulation of fireworks that fired up those on both sides of the issue long after the votes were counted.

Lost in the public debate over the fireworks were some important results from the election. All the budget articles passed, which is a credit to the budget committee and select board members who dedicated their time to the process, asking tough questions and prioritizing needs.

The 2020 budget included some important changes to service that need to be noted. First and foremost, this budget restores a patrol position that was cut in 2013, bringing the police department to eight full-time officers and two reserve officers. The budget also included $100,000 in additional funds for paving and road reconstruction.

The town approved the implementation of a Tax Increment Financing District. This is a significant change. The TIF will capture any new value added to a property in the TIF District into a separate fund meant for economic development, while the last value of the property before the TIF continues to contribute to the general fund. The money in the TIF fund will be used for a public infrastructure project with the goal of economic growth in Waldoboro. The infrastructure project must be approved by the select board and residents.

Important things are happening in Waldoboro; exciting things are happening in Waldoboro! However, there is more work to be done and we need to engage more than 14.7% of the electorate. We need to spur debate about the future of Waldoboro. What does your Waldoboro look like? What do you want it to be? Reach out and share your thoughts, your concerns, and your questions. Don’t wait until the day after an election to share your thoughts. Share them now, participate in the future!