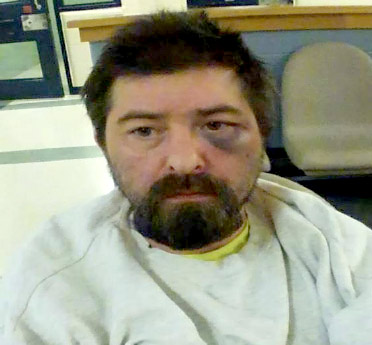 A Wiscasset man faces several charges after allegedly breaking into his ex-girlfriend’s home and assaulting her and her teenage son, who used a stun gun to fend him off while his teenage sister called 911.

Two Wiscasset police officers responded to a 911 hang-up at about 6 p.m., Wednesday, Feb. 5 and, after an initial delay in locating the home where the call had come from, found Miles Brewer, 39, barricaded in an upstairs bedroom with the woman and the two children. They forced entry into the bedroom and arrested Brewer.

Brewer faces charges of aggravated assault, burglary, criminal threatening, drug possession, and operating under the influence, according to a statement from the Wiscasset Police Department.

The statement encourages residents to number their homes. “In an emergency, every second counts,” the department said in the statement. The officers’ response was delayed because there were two houses on the street without numbers. If not for hearing voices “in distress” at one of the homes, “there could have been a further delay and possibly a much different outcome.”

When they did arrive, officers found the door to the residence had been forced open and followed the voices upstairs.

The department said that when Brewer had broken in and started assaulting the woman, the son “quickly came to her defense” and Brewer assaulted him too, at which time the son got the stun gun while his sister called 911.

Brewer was taken to Two Bridges Regional Jail and remains in custody.