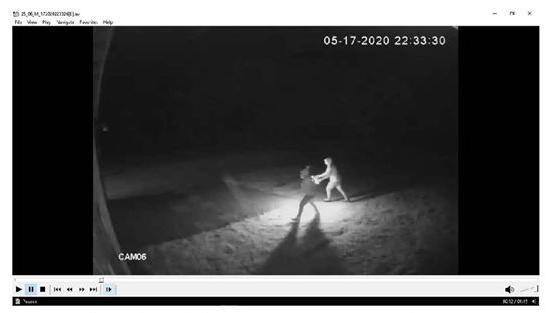 The Maine State Fire Marshal’s Office is asking the public to help identify two people in a surveillance image as it investigates an incident of arson at Finest Kind Medicinals, on Route 1 in Waldoboro.

The Maine State Fire Marshal’s Office is investigating an incident of arson that caused minor damage to the side of the Finest Kind Medicinals building on Route 1 in Waldoboro.

“We are actively working on it and talking to people at this time,” Sgt. Joel Davis said. The fire was set the evening of Sunday, May 17.

A person working on the building noticed the damage, according to Waldoboro Police Chief John Lash.

“It initially came in as a report of possible criminal mischief,” Lash said. Officer Jeffery Fuller responded “and said he thought someone had thrown a Molotov cocktail at the building,” Lash added.

The police department then contacted the Fire Marshal’s Office and turned over the investigation.

“They showed up in force, assessed the damage, and started the investigation. I got to give credit where credit is due. They do great work,” Lash said.

Finest Kind Medicinals is a marijuana retail store, according to Max Johnstone, a planning consultant to the town of Waldoboro.

The Maine State Fire Marshal’s Office asked for the public’s help with the investigation in a Facebook post Wednesday, May 20. Specifically, the post asked for help identifying two people in a still image from a surveillance camera.

Anyone with information about the incident is asked to call the Maine State Fire Marshal’s Office at 624-7076 or the Waldoboro Police Department at 832-4500.