A Damariscotta woman faces charges of reckless conduct with a dangerous weapon, operating under the influence, and driving to endanger after allegedly intentionally driving into the path of a tractor-trailer and causing a collision on Route 1 in Woolwich the afternoon of Thursday, Nov. 10.

Sandra Francis, 36, of Damariscotta, sustained non-life-threatening injuries in the crash, which partially shut down Route 1 for about five hours, according to a press release from the Sagadahoc County Sheriff’s Office.

Francis was driving a 2012 Ford Focus north on Route 1 just north of the southern intersection with George Wright Road at the time of the accident, according to the press release. Robert Martin, 66, of Sunapee, N.H., was driving a 2008 Peterbilt tractor south on Route 1, towing a 2008 Polar tanker-trailer owned by Jay Maholtz Trucking, of Strafford, N.H.

The Ford Focus “veered directly into” the tractor-trailer’s path, Sagadahoc County Sheriff Joel Merry said in the press release. “The truck driver made every attempt to avoid the collision and ended up wedged against a line of guardrails.” 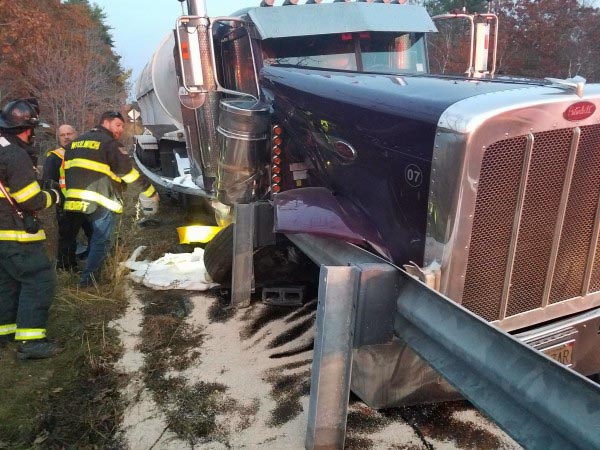 Firefighters from Woolwich and Bath work to prevent oil spilled in a collision on Route 1 from draining into the Sasanoa River the afternoon of Thursday, Nov. 10. (Photo courtesy Woolwich Fire Department)

“It is believed that the operator of the Ford Focus intentionally drove into the path of the oncoming tractor-trailer,” Merry said. “If not for the actions of the truck driver, this would likely have been a fatal crash.” 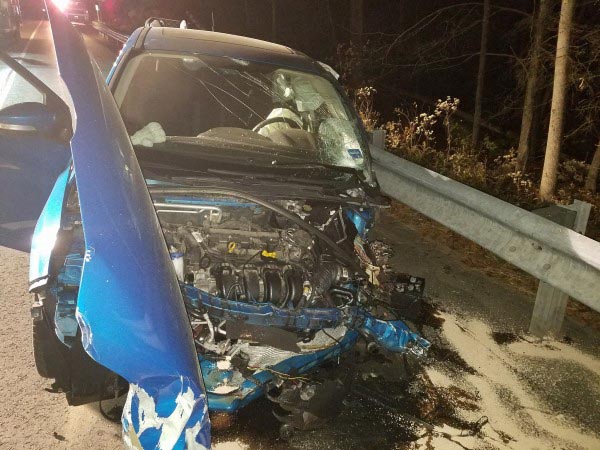 A Damariscotta woman is believed to have driven her 2012 Ford Focus into the path of a tractor-trailer on Route 1 in Woolwich the afternoon of Thursday, Nov. 10, according to Sagadahoc County Sheriff Joel Merry. (Photo courtesy Woolwich Fire Department)

Sagadahoc County Communications received a report of the crash at 4:49 p.m.

Francis was taken to Mid Coast Hospital in Brunswick. Martin was not hurt.

Francis will appear in West Bath District Court for her arraignment on Jan. 10, 2017.

The accident remains under investigation. The lead investigator is Sgt. Dale Hamilton. The Sagadahoc County Sheriff’s Office and the Brunswick Police Department are reconstructing the accident.

About 20-25 gallons of diesel fuel spilled from the truck onto Route 1, but a quick response prevented the fuel from spilling into the Sasanoa River, according to the Bangor Daily News.

Firefighters from Bath and Woolwich, along with the Maine Department of Environmental Protection and local contractor Jack A. Shaw & Sons Inc., worked to keep the fuel out of the water.