The Maine Drug Enforcement Agency has arrested a mother and daughter from Lincoln County and charged them with selling thousands of oxycodone pills in Knox and Lincoln counties over the past year. 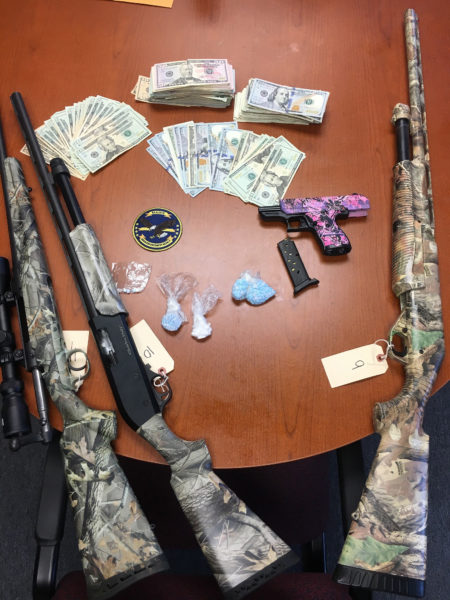 The Maine Drug Enforcement Agency seized $13,000 in cash, 350 oxycodone pills, and four guns, including a loaded 9 mm handgun, from a residence on Route 32 in Jefferson on Thursday, Oct. 26.

Carol Day, 69, of Jefferson, and her daughter, Kimberly Reynolds, 53, of Waldoboro, face one charge each of class A aggravated trafficking in schedule W drugs (oxycodone), according to a press release from Maine Department of Public Safety spokesman Stephen McCausland.

The arrests follow a year-long investigation by the MDEA Mid-Coast District Task Force and the Lincoln County Sheriff’s Office into the alleged sale of oxycodone pills by Day and her daughter.

Investigators allege that Day would regularly travel out of state to buy large amounts of oxycodone, then return to her home in Jefferson, where she and her daughter would sell hundreds of the pills to customers in Knox and Lincoln counties each week, according to the press release. The average price per pill was $30. Neither of the women had a prescription for the drug.

The morning of Thursday, Oct. 26, MDEA agents searched Day’s home on Route 32 in Jefferson. Agents seized 350 30-milligram oxycodone pills; four firearms, including a loaded 9 mm handgun; and $13,000 in suspected proceeds from the sale of drugs, according to the press release. The approximate street value of the seized oxycodone is $10,500.

Agents arrested Day and Reynolds at the residence without incident, as well as Clyde Lee, 38, of Waldoboro, who was allegedly buying pills at the time, according to the press release. Lee faces a charge of class D possession of schedule W drugs (oxycodone).

All three were transported to Two Bridges Regional Jail in Wiscasset, where bail was set for Day and Reynolds at $100,000 cash. Lee’s bail was set at $500.

The Knox County Sheriff’s Office, the Maine Warden Service, and the Rockland Police Department also assisted in the investigation.