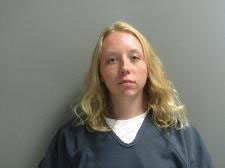 After more than a year at large, a New Harbor woman accused of embezzling more than $50,000 from a local store has turned herself in.

The Lincoln County Sheriff’s Office arrested Siarra M. Kear, 24, in the parking lot of the store, Dee’s Variety, in New Harbor, the afternoon of Sunday, Aug. 5, according to Lt. Michael Murphy.

Kear had called the sheriff’s office from her vehicle in the parking lot, according to Murphy. She eventually reached Detective Scott Hayden, who investigated the case.

Kear asked the sheriff’s office to arrest her, according to Murphy. A deputy picked her up at Dee’s and took her to Two Bridges Regional Jail in Wiscasset.

Kear left Maine in January 2017. She was arrested in Colorado the next month, but fought extradition.

She made bail, didn’t show for an extradition hearing, got arrested again, bailed again, and didn’t appear for another hearing, according to Murphy. She has been at large since the spring of 2017.

Murphy said the sheriff’s office has been actively looking for her ever since, but “she just disappeared.”

“Colorado has been less than helpful” in Lincoln County’s efforts to bring Kear back, he said. The sheriff’s office believes she had been in Colorado until recently.

“She says she wants to straighten her life out, so that’s why she came back,” Murphy said.

Kear faces one count each of class B forgery and class B theft by unauthorized taking in connection with the embezzlement investigation, as well as a new charge of class D negotiating a worthless instrument, according to court documents and to Murphy.

The new charge alleges that Kear wrote a check on an account she knew was closed, Murphy said. The incident occurred in Lincoln County before Kear left the state.

A judge will set bail on the charges during a hearing at the county courthouse in Wiscasset at 1 p.m., Monday, Aug. 6, according to Murphy. Kear will likely appear by video from the jail.

Kear still has an outstanding warrant in Colorado. After the resolution of the Maine charges, she will face prosecution there for failure to appear, according to Murphy.

Kear was an employee of Dee’s Variety for about six years and the store’s manager from January 2013 until January 2017, according to an affidavit by Hayden.

One day in early January 2017, $3,200 in cash went missing from the store, according to Hayden’s report. The same day, Kear didn’t show up for work.

A subsequent review of store records by the store’s owner led to the discovery of more than $35,000 in unauthorized checks payable to Kear, as well as thousands more in unauthorized charges to a business credit card in Kear’s name, according to the report.

The owner was later told that Kear had left the state Jan. 29, 2017. Hayden obtained a warrant for her arrest Feb. 7.

The Aurora Police Department in Aurora, Colo., a suburb of Denver, arrested Kear on Feb. 24.