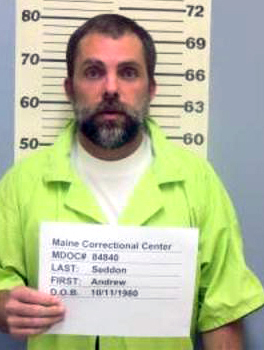 A lifetime registrant of the Maine Sex Offender Registry has pleaded guilty to charges related to his April arrest at a Wiscasset Middle High School recital.

Andrew M. Seddon Jr., 36, of Wiscasset, pleaded guilty to contact with a child under 14 in a restricted zone and failure to comply with the sex offender registry act, both class D misdemeanors, on June 26.

Seddon was sentenced to 364 days, all suspended, and one year of probation for contact with a child under 14, and 30 days for failing to register as a sex offender. He will serve the sentences concurrently with a separate case out of Sagadahoc County, according to court documents.

Seddon was also sentenced to six months for operating under the influence with priors, to be served concurrently to his other charge.

Seddon is in custody at the Maine Correctional Center in Windham.

Wiscasset School Resource Officer Craig Worster spotted and arrested Seddon during a recital at Wiscasset Middle High School on April 13. Seddon is a lifetime registrant of the Maine Sex Offender Registry due to a previous conviction for unlawful sexual contact.

Seddon was also charged with violation of condition of release for being in a “child safe zone,” but the charge was dismissed as a result of his guilty plea to contact with a child under 14 in a restricted zone, according to court documents.

During the course of a separate investigation, the Wiscasset Police Department discovered that Seddon failed to notify the police department that he had moved to Wiscasset in January, Worster said in an affidavit.

The Maine State Bureau of Identification sent the Wiscasset Police Department a certified letter on April 26 informing them Seddon was delinquent in registering his change of address with the police department.

Seddon was charged with two counts of violation of the sex offender registration act; one count was dismissed as a result of his guilty plea.

Seddon’s probation conditions require him to complete sex offender evaluation and treatment, have no contact with anyone under 18, and submit to random searches of devices capable of internet access for sexually explicit material. Seddon is also restricted from schools, libraries, YMCAs, public pools or playgrounds, day cares, beaches, or other areas where children gather.

Since Seddon’s arrest, the Wiscasset Police Department has taken steps to protect and publicize “child safe zones.” Binders with photos of registered sex offenders have been distributed to area schools and child safe zone signs will be placed in areas frequented by minors, Wiscasset Police Chief Jeffrey Lange said.