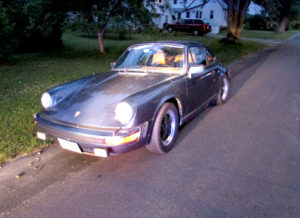 A 15-year-old Whitefield boy is facing three felony charges for his role in a string of car thefts from Farmingdale in the past week that caused more than $50,000 in damages, according to a press release from the Maine Department of Public Safety.

The Whitefield teenager and a 15-year-old from Farmingdale were charged with felony theft, burglary, and aggravated criminal mischief, and a misdemeanor charge of unauthorized taking of a motor vehicle for allegedly stealing eight cars, damaging them, and damaging the Litchfield Fairgrounds, spokesperson Stephen McCausland said.

In addition to the eight stolen vehicles, the 15-year-olds allegedly stole a vanity license plate with a plate number of “STOL3N,” McCausland said. The state police believe the stolen vehicles were used to damage fields in West Gardiner and in Lincoln County, according to the press release. 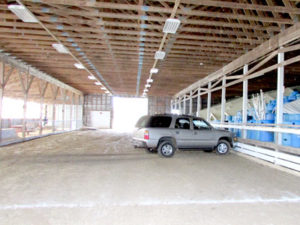 The Chevrolet Tahoe that police allege two teenagers from Whitefield and Farmingdale stole was found inside one of the fairground’s buildings. (Photo courtesy Maine State Police)

According to Sgt. Chris Rogers, of the Maine State Police, the two teenagers are believed to be responsible for damaging the Whitefield Elementary School ball fields on Friday, June 24 with the stolen vehicles.

The teenagers allegedly stole seven vehicles from Maine Avenue Auto Sales, a used car dealership in Farmingdale; they allegedly entered the car lot, located the car keys, and drove off with the vehicles, according to the press release.

One of the stolen vehicles, a 2000 Chevrolet Tahoe, was later found inside one of the buildings of the Litchfield Fairgrounds. The SUV was allegedly used to ram a gate and damage some of the fields of the fairgrounds.

Additional vehicles stolen from the car dealership include two Subaru Outbacks, a 2005 Pontiac Grand Prix, and a 2003 Mazda Protégé.

The vehicle thefts began Tuesday, June 21, when a 1979 Porsche was stolen from the Foggy Bottom Campground in Farmingdale, which is next door to the car dealership, McCausland said. The Porsche was later found on Bowman Street after residents reported a car driving erratically through their neighborhood.

On Friday, June 24 police responded to Pond Road in West Gardiner, where the stolen vehicles were allegedly being used to damage fields; one car was left behind. Another stolen vehicle was found in the parking lot of Uncle Henry’s in Augusta, and another was returned to the Maine Avenue Auto Sales car lot covered in mud and grass, both inside and out, McCausland said.