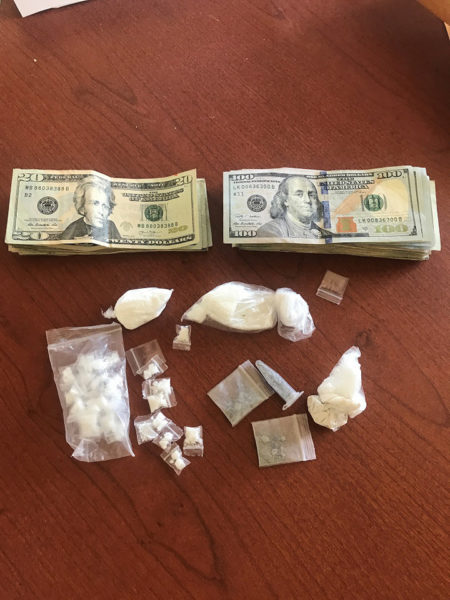 Cash, drugs and paraphernalia were seized during a drug bust in Warren, Waldoboro, and Thomaston on Wednesday, April 4.

A Rochester, N.Y. woman allegedly led police on a car chase from a parking lot on Route 1 in Warren south on Route 1 to the area of Moody’s Diner in Waldoboro the afternoon of Wednesday, April 4, tossing bags of crack cocaine out the window along the way.

Police arrested Chamara Cox, 31, near the diner, according to a press release from Maine Department of Public Safety spokesman Stephen McCausland. It was the third arrest Wednesday as part of an investigation into the distribution of crack cocaine in Knox and Lincoln counties.

Cox and Derrick Presha, 38, of Buffalo, N.Y., face one count each of aggravated trafficking in schedule W drugs (crack cocaine), according to the press release. Kenneth Judkins, 32, of Waldoboro, faces charges of refusing to submit to arrest and violation of condition of release.

The arrests were the result of a two-week investigation by the Maine Drug Enforcement Agency’s Mid-Coast District Task Force into the distribution of crack and heroin in the region by a group from New York.

On Wednesday afternoon, MDEA agents arrested Presha and Judkins while Presha was allegedly selling crack to Judkins in a parking lot on Route 1 in Warren, according to the press release.

Cox had driven Presha to the parking lot in her rental car. As agents arrested Presha and Judkins, other agents attempted to arrest Cox, but she “sped off,” McCausland said in the press release.

Knox County sheriff’s deputies and Waldoboro officers pursued the vehicle to the area of Moody’s Diner, where the chase ended and Cox was arrested, according to the press release.

A Lincoln County Sheriff’s Office K-9 located the four bags of crack thrown from the car.

Law enforcement seized four more bags from inside the vehicle and three New York driver’s licenses with photos resembling Cox, according to the press release.

After the arrests in Warren and Waldoboro, MDEA agents, with the assistance of the Thomaston Police Department and Knox County Sheriff’s Office, searched two motel rooms in Thomaston rented by Cox and Presha.

During the search, they seized 50 grams of bulk crack cocaine, 25 individual doses of crack cocaine, 6 grams of suspected heroin, and $3,000 in suspected drug proceeds, according to the press release, which placed the street value of the seized drugs at $10,000.

Cox, Judkins, and Presha were taken to the Knox County Jail. Bail was set at $50,000 each for Cox and Presha.

Judkins is being held without bail because he was out on bail for a pending trafficking case in Lincoln County and allegedly violated his bail conditions.