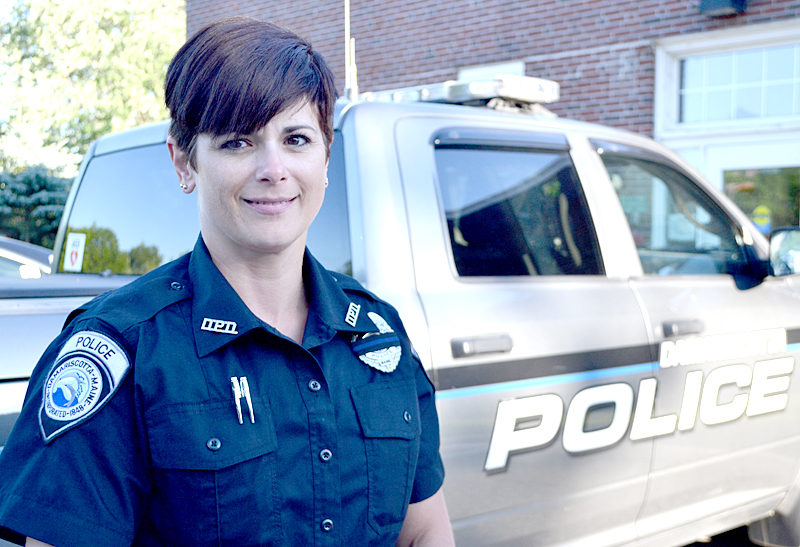 Amanda Hesseltine, of Washington, joined the Damariscotta Police Department as a part-time reserve officer in May. (Maia Zewert photo)

Amanda Hesseltine, of Washington, was sworn in as a reserve officer May 31.

“This is something I’ve always wanted to do, and it finally feels like I’m doing what I’m supposed to be doing,” Hesseltine said.

Hesseltine is currently in the third phase of the law enforcement pre-service training program, during which she has to complete 80 hours of work with a supervisor. Sgt. Jason Warlick is overseeing Hesseltine’s training.

“(Hesseltine) has been a great addition,” Warlick said. “She’s extremely professional and treats the public well. It’s great having her here.”

Hesseltine said she has learned a lot during her time with the department, from responding to calls and traffic stops to navigating Damariscotta roads.

“He has just been so supportive and understanding,” Amanda Hesseltine said. “I wouldn’t be able to do this without that.” 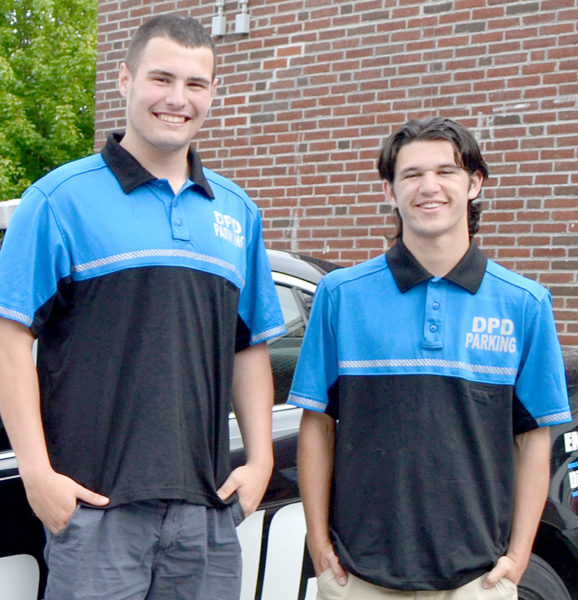 From left: Westleigh Munroe, of Whitefield, and Gabe Solorzano, of Jefferson, have joined the Damariscotta Police Department as parking enforcement officers for the summer. (Maia Zewert photo)

Westleigh Munroe, 19, of Whitefield, and Gabe Solorzano, 18, of Jefferson, joined the department as parking enforcement officers for the season. Both Munroe and Solorzano said writing tickets can sometimes be their least favorite part of the job.

“It can be hard sometimes, but we’re out here trying to do our jobs, just like everyone else,” Solorzano said. “With a little bit of cooperation and patience, it doesn’t have to be a headache for anyone. We’re just keeping the flow of the community going.”

In addition to enforcing the town’s traffic and parking ordinance, Munroe and Solorzano serve as the department’s representatives in the downtown.

“There have been a lot of people who will come and ask me questions about where there’s free parking, directions on how to get somewhere or even places to eat,” Munroe said. “You just try and be helpful whenever you can.”

Both parking enforcement officers have also gotten to know some of the regulars in the downtown while walking their rounds.

“You start to see the same people and get to know them,” Solorzano said. “It makes the job more enjoyable seeing the people you know.”

In addition to their parking enforcement duties, Munroe and Solorzano have worked in the department answering phones and helping residents when the administrative assistant is out of the office.

Munroe and Solorzano have both learned new skills they can apply after the summer. Munroe is studying criminal justice at Southern Maine Community College in South Portland.

“I thought I would just see the on-duty officers every once and a while, but they’ve gone out of their way to talk to me and give me ideas and suggestions,” Munroe said. “There’s really no better way for me to learn about the job than by being around the officers all the time.”

Solorzano recently graduated from Erskine Academy and will attend the University of Maine at Farmington in the fall, where he will major in early childhood education. He said working as a parking enforcement officer has not only improved his communication skills, but also given him a new respect and appreciation for the officers.

“You might not see them all the time, but they’re always out doing work for the community, and it’s nice to be able to be a small part of that,” Solorzano said.

“What some people might not realize is that the three-hour time limit is for the day, not just a parking spot,” Young said. “If you’re in a parking spot for two hours and 59 minutes and move to another spot, your time does not start over.”

The police department does not enforce parking spaces on Church, Elm, and Vine streets. There is no parking enforcement on Sundays.