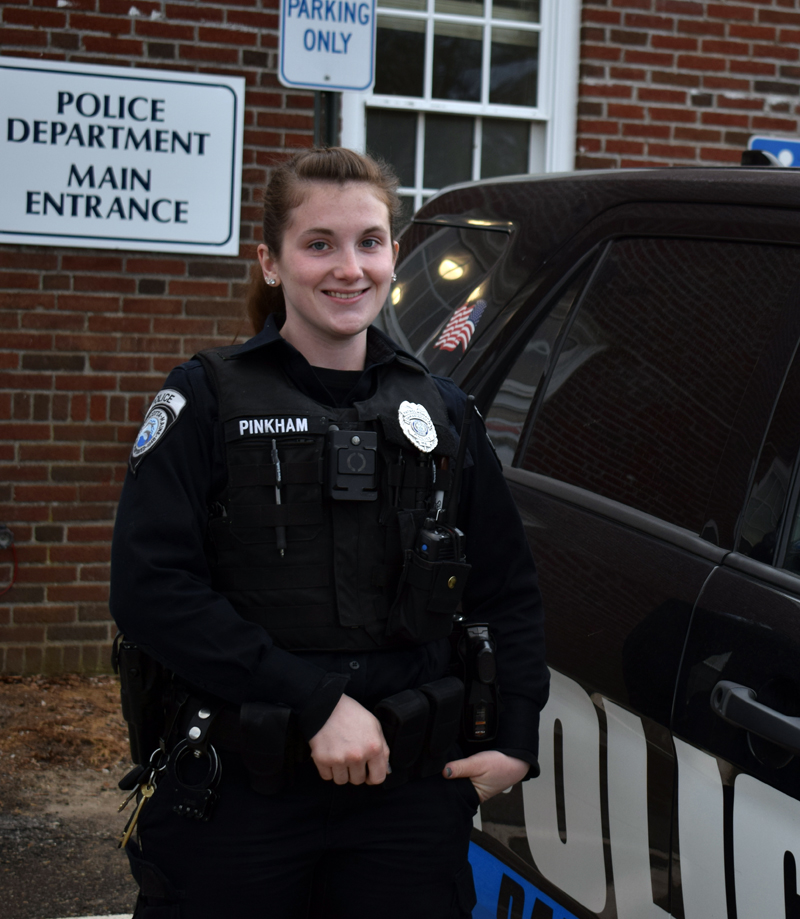 Officer Melodylee Pinkham said she feels right at home in her first patrol job at the Damariscotta Police Department.

“All of the people working here have pretty much become my mini other family. … The community seems really great here; everybody’s really nice,” Pinkham said in an interview Monday, Feb. 3.

Pinkham started work at the department in July 2019. She had been working as a corrections officer at the Kennebec County Jail when Damariscotta Police Chief Jason Warlick heard about her from the Wiscasset Police Department and recruited her to join his department.

Warlick said he has a soft spot for corrections officers, since he was once one himself.

He said seeing people come into jail at their worst and make progress is a valuable experience, as it develops interpersonal skills critical for dealing with everyday occurrences and interactions as a patrol officer.

In December, Pinkham completed her time with a field training officer. She can now patrol on her own.

Pinkham said she enjoyed her job as a corrections officer, although it could be trying at times.

“Going from corrections, most people there don’t like you. So, coming here and having some people encourage me and like me here, I’m like, ‘Oh, this is what friendliness is,’” Pinkham said with a laugh.

She said she has been interested in criminal justice since high school. Criminal justice drew her in because of the capacity to help people and the community focus that goes with the field.

Warlick said Pinkham graduated from high school a year early. She doesn’t like to brag, but he saw that as a noteworthy accomplishment.

Pinkham went on to graduate from Thomas College in Waterville with degrees in criminal justice and forensic psychology.

While at Thomas College, she saw an advertisement for a position at the Somerset County Jail. She started there part-time in 2017 and started at the Kennebec County Jail in 2018.

When she was hired at the Damariscotta Police Department, she left both jobs and moved to Damariscotta. She grew up in southern Maine, but now lives in town with her boyfriend and dogs.

In her free time, she enjoys training in Brazilian jiujitsu and Shaolin Kempo karate at Villari’s Self-Defense Center in Scarborough, where she has been going for seven years.

She said growing up watching pro wrestling with her family inspired her to begin taking karate classes.

Pinkham said her job in law enforcement is nerve-wracking at times, not knowing what kind of a situation she could walk into, but she enjoys it. She said each situation is unique and provides a valuable learning experience.