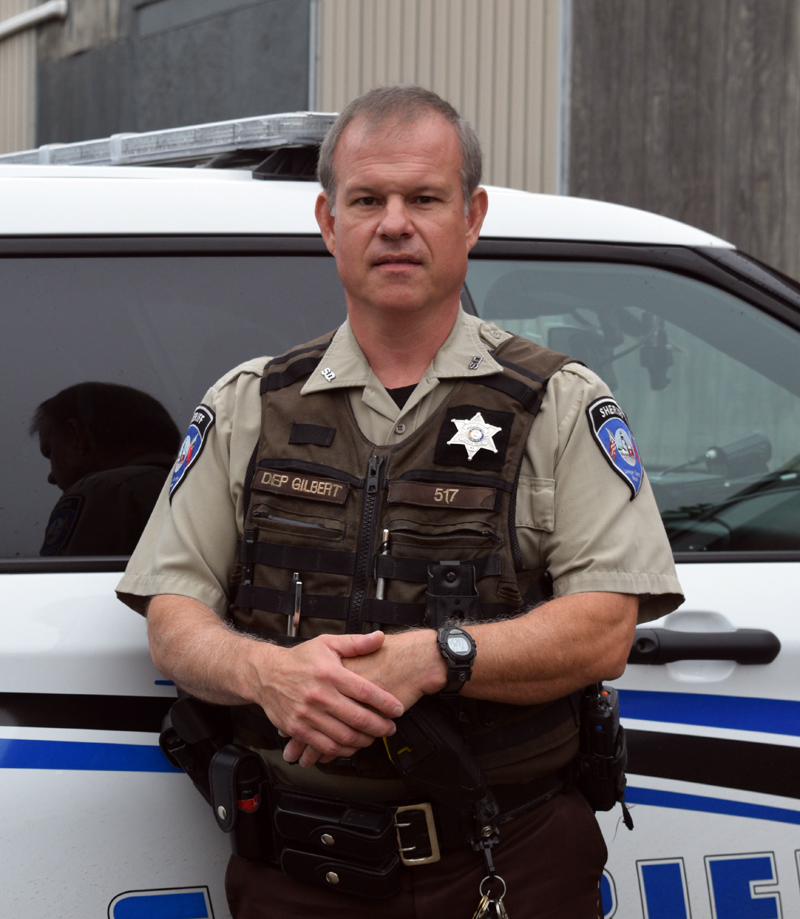 After serving with the Lincoln County Sheriff’s Office for 20 years, Deputy Chad Gilbert will officially retire from his career in law enforcement on Sunday, July 25. (Nate Poole photo)

After dedicating his adult life to public service and law enforcement, Deputy Chad Gilbert will retire from full-time duty on July 25.

Although he has officially logged 25 years as a full-time officer in Lincoln County, 20 of which spent with the Lincoln County Sheriff’s Office, Gilbert’s law enforcement career goes back much farther.

“It’s pretty much been public service my whole life,” Gilbert said in an interview on July 14.

A native of Dexter, Gilbert’s enthusiasm for law enforcement was sparked in his late teens by his cousin, a state trooper who would often take him for rides in his cruiser.

After graduating high school in 1989, Gilbert served in the U.S. Coast Guard for four years before enrolling at the University of Maine at Presque Isle, where he earned a bachelor’s degree in behavioral science and an associate’s degree in criminal justice.

Out of college, Gilbert worked as a park ranger at Mesa Verde National Park in Colorado, eventually returning to Maine to serve as a reserve police officer in Ogunquit and Bar Harbor. It was in 1996 when Gilbert joined the Waldoboro Police Department and attended the police academy, spending a short time with the Wiscasset Police Department before joining the sheriff’s office.

Having worn a variety of hats in the last 20 years, be it accident reconstructionist, school resource officer, or Drug Abuse Resistance Education, or D.A.R.E. officer for Whitefield Elementary School, Gilbert has made himself a familiar and reliable figure in his office and community.

During a Tuesday, July 20 phone interview, Gilbert said that working with students as a school resource officer at Lincoln Academy was his favorite part of the job, especially later in his career. He said that many of the students that he’d worked with, either at Lincoln Academy or Whitefield Elementary, now consider him a friend and wave to the deputy or chat with him on or off duty.

“It breaks that ice between people and law enforcement,” Gilbert said.

Gilbert said that whenever a colleague asked him how work was going at Lincoln Academy, he would give the same response: “It’s all about the children.” It became something like the deputy’s catchphrase, well known across departments.

Gilbert said that he is grateful for Sheriff Todd Brackett and his colleagues for their support and friendship, and he also wanted to thank the Lincoln County community.

“Here in Lincoln County we have good support from the community. I think that’s huge,” Gilbert said.

However, Gilbert also noted that more than just support, law enforcement offices and communities at large need more citizens to step up and take on first responder positions. The sheriff’s office has struggled to recruit both experienced and inexperienced personnel this year, even with a base wage of more than $22 an hour and signing bonuses for experienced applicants.

“I’d like to see other people join their local volunteer fire departments, join the (emergency medical services) … even if it’s driving the ambulance, trying to get on as a reserve, even if they can only take one shift a month,” Gilbert said.

Gilbert said he thought that better benefits and pay would help to draw applicants, but that the strained political climate around law enforcement would be a tougher problem to address. For those who are considering a career in law enforcement, he said that the job is like any relationship in that there are ups and downs and it requires fidelity and dedication for success.

“It’s a noble profession,” Gilbert said. “It makes you feel good when you help out your community.”

Reaching the cusp of 50 in August, Gilbert said that he will be pursuing other passions and ventures after he retires, but he will be taking at least a month to decompress before he starts thinking about his next move. With a family lake house in Dexter, he plans to spend plenty of time fishing, riding his all-terrain vehicle, and spending time with the people most important to him.

“That’ll give me a lot more time to spend with my family and the people I love and care about,” Gilbert said.

While he won’t be seen patrolling the county for much longer, Gilbert has no intentions of leaving just yet, as his children attend Whitefield Elementary School and Great Salt Bay Community School.

Asked if he anticipated any celebration with the department, Gilbert seemed indifferent to the idea at first.

“I haven’t heard anything. Could be a surprise, could be nothing,” he said before cracking a grin. “They’d better!”