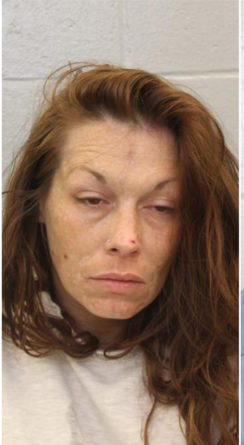 Loretta Susan Perkins, 37, faces a charge of drug trafficking, according to a spokesman for the Maine Department of Public Safety.

The Maine Drug Enforcement Agency arrested Perkins and seized the drugs, along with drug ledgers and $1,000 in cash, with assistance from the Lincoln County Sheriff’s Office and the Wiscasset Police Department.

Perkins was taken to Two Bridges Regional Jail in Wiscasset.

After Perkins’ arrest, MDEA agents began looking for the suppliers of the drugs, which a press release from the Maine Department of Public Safety identified as Todd Dickson, 26, and Joris Gomez, 25, of New York City.

Before agents could find Dickson and Gomez, the pair traveled by bus from New York City to Portland, by taxi from Portland to Richmond, and, the night of Wednesday, May 1, allegedly attempted to burn down the home where Perkins had been living on Pitts Corner Road, according to the press release.

Dickson and Gomez “were intent on collecting drug money debt,” according to the press release, which does not specify who owed the debt.

They bought a can of gasoline at a convenience store en route to the house.

A car in the driveway of the home was destroyed by fire. Gasoline was spread throughout the house, although the house has only minor fire damage. A woman and her teenage daughter fled the house unharmed.

Dickson and Gomez left in the same taxi. Police stopped the vehicle shortly thereafter on Interstate 295 in Topsham and arrested the pair.

The Maine State Fire Marshal’s Office charged Dickson and Gomez with two counts each of arson, as well as burglary and theft. MDEA charged them with aggravated trafficking in heroin. They were taken to Two Bridges.

The Brunswick, Richmond, and Topsham police departments and the Sagadahoc County Sheriff’s Office assisted with the investigation of the Richmond fires and their aftermath. The Richmond Fire Department put out the fires.