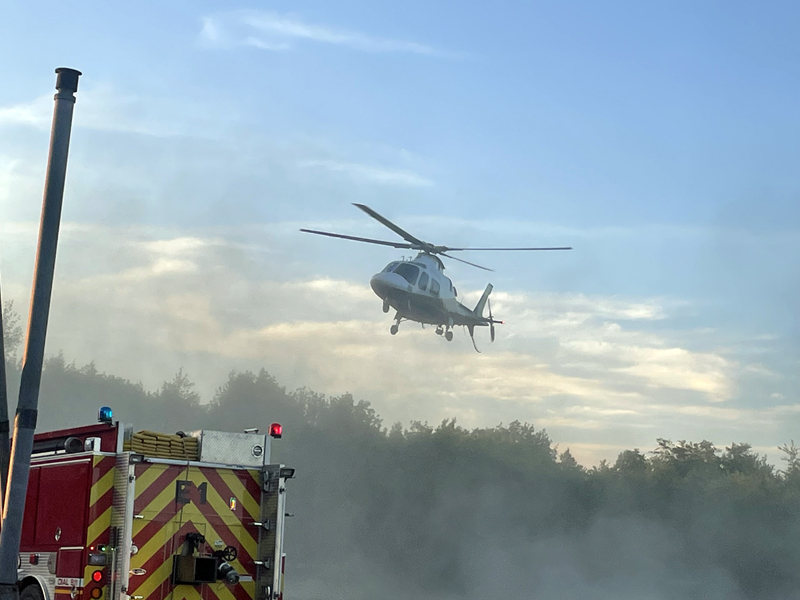 A LifeFlight helicopter takes off from Peaslee’s Quick Stop on Route 17 in Jefferson Wednesday, Aug. 3. According to the Lincoln County Sheriff’s Office, a Gardiner woman sustained serious injuries when her eastbound 2012 Chevrolet Equinox crossed the center line and struck three oncoming motor vehicles on Route 17 in Jefferson. (Sherwood Olin photo)

A four-vehicle crash on Route 17 in Jefferson, Wednesday, Aug. 3, sent two individuals to the hospital, and closed the road for several hours while investigators and responders cleared the scene.

According to the Lincoln County Sheriff’s Office, Ivy Mae Young, 31, of Gardiner was operating a 2012 Chevrolet Equinox eastbound on Route 17 around 7 p.m., when she crossed over the center line, striking a westbound 2015 Toyota Rav4, operated by Dorothy O’Keefe, 39, Augusta.

The Dodge trucks were both owned by a Caribou-based paving company and were hauling asphalt products. A passenger in one of the trucks, Timothy Belanger, 30, of Bangor, was transported to MaineGeneral in Augusta.