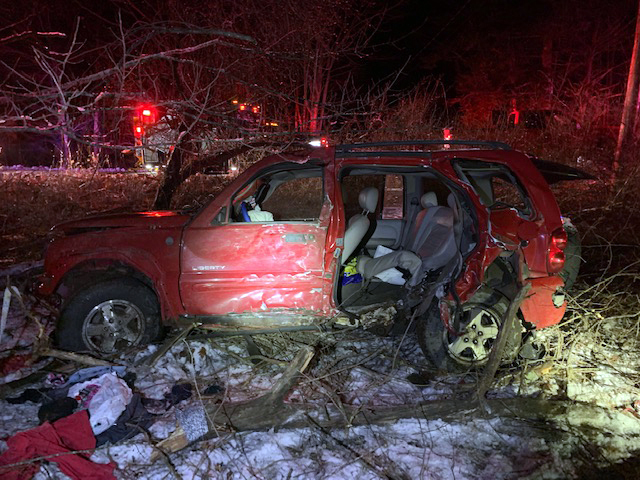 A Nobleboro teenager remains in critical condition at Maine Medical Center in Portland as of Tuesday, Dec. 15, after suffering injuries in a crash a week earlier.

Gage H. York, 18, was a passenger in a vehicle that crashed on Lower Cross Road late Tuesday, Dec. 8. Police believe alcohol and speeding contributed to the crash.

York was taken to LincolnHealth’s Miles Campus in Damariscotta, then to Maine Medical, with critical injuries, according to a press release from the Lincoln County Sheriff’s Office. The driver, Riley M. Mercier, 19, of Nobleboro, and two other passengers, Courtney B. Gagnon, 18, of Newcastle, and Brian H. Lawrence, 18, of Nobleboro, were treated at Miles for non-life-threatening injuries.

Mercier was driving a 2004 Jeep Liberty west on Lower Cross Road, according to the sheriff’s office. He told police that, while cresting a hill, he saw a deer in the road. He swerved to avoid the deer and lost control of the vehicle, which went off the north side of the road, down an embankment, and into the woods, striking several trees.

All four occupants of the vehicle were wearing seat belts and the SUV’s front air bags deployed.

The Lincoln County Communications Center received a report of the crash at about 11:45 p.m.

Mercier faces a charge of class C aggravated operating under the influence with injury, a felony, according to the sheriff’s office. He will make his initial court appearance in Wiscasset on Feb. 11.

“The preliminary investigation indicates speed and alcohol were factors in this collision,” the sheriff’s office said in a press release. The investigation is ongoing, Lt. Brendan Kane said Tuesday, Dec. 15.

Lower Cross Road was shut down until about 2:30 a.m.