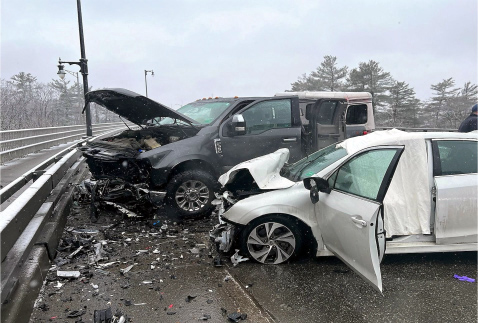 A Southport resident was serious injured in a fatal head-on collision at the north end of the Sagadahoc Bridge in Woolwich on Friday, Jan 6.

Witnesses reported a 2021 Subaru Legacy, operated by Robert A. Payzant Jr., 55, of Lewiston, was traveling south on Route 1 when it veered across the roadway and into the path of a 2017 Ford F150 operated by Joseph Pickul, 69, of Southport, according to a press release from the Sagadahoc County Sheriff’s Office. Both drivers were the only people in their respective vehicles, and the Ford F150 was towing an empty horse trailer.

Payzant died at the scene, according to the press release. Pickul was transported by Woolwich Emergency Medical Services to Maine Medical Center in Portland with serious, non-life-threatening injuries.

Speed and alcohol do not appear to be a factor in the crash, according to the press release.

Sagadahoc County Sheriff Joel Merry said in an email on Tuesday, Jan. 10 that the investigation could take several weeks to complete. Merry added that Pickul was not responsible for the crash and he did not have an opportunity to avoid it.

The Sagadahoc County Communications Center received multiple calls at approximately 12:42 p.m. with reports of a motor-vehicle crash on Route 1. Traffic along the north end of the Sagadahoc Bridge on Route 1 was reduced to one lane in each direction until 3:30 p.m., according to the press release.

As of Wednesday, Jan. 11, Pickul is in fair condition, according to the staff at Maine Medical Center