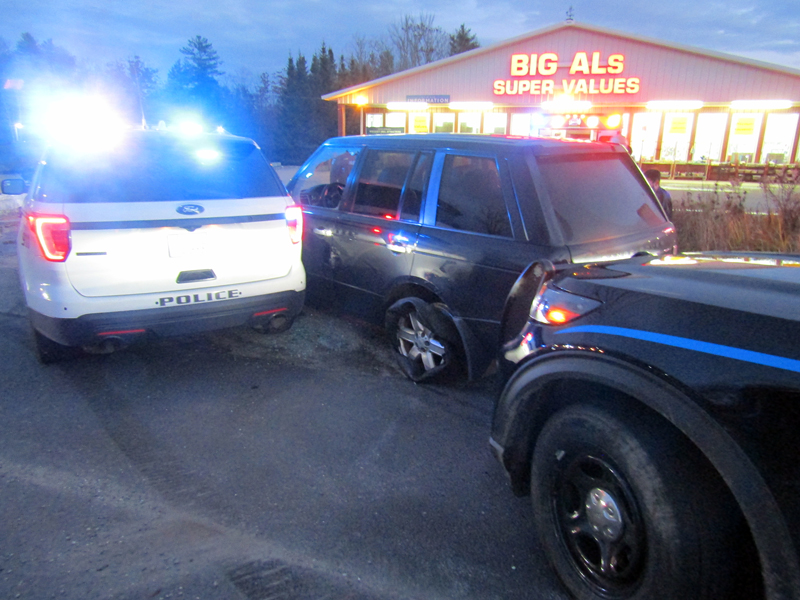 Wiscasset police officers and deputies from the Lincoln County Sheriff’s Office took a driver into custody in Wiscasset after a high-speed chase on Nov. 15.

A Standish man was arrested in Wiscasset on Monday, Nov. 15 following a high-speed chase through Brunswick and Bath.

At approximately 4:05 p.m., a 2004 Range Rover, operated by Pasquale Lapomarda, 21, of Standish, passed a Maine state trooper on Route 1 northbound in Brunswick at speeds exceeding the posted speed limit by 30 mph, according to a news release from the Maine Department of Public Safety. The trooper initiated a pursuit.

Lapomarda continued north on Route 1 into the towns of West Bath and Bath reaching a top speed of 102 mph.

Although speeds reduced, Lapomarda did not stop and the trooper terminated the pursuit as Lapomarda entered heavy commuter traffic, according to the release.

Lapomarda immediately slowed his speed and became caught up in heavy traffic while under the observation of the trooper, according to the news release. Moments later, additional information was provided by state police dispatch indicating that the same vehicle (by Maine registration plate) had multiple complaints of speed and erratic operation on I-295 in the Freeport a few minutes before it passed the trooper.

Based on the new information, the trooper initiated a traffic stop on the Range Rover. Lapomarda pulled over momentarily then sped off toward Wiscasset, according to the news release.

Through communication with the Lincoln County Communications Center, Wiscasset police were able to deploy tire deflating strips that flattened both rear tires on the vehicle. Lapomarda continued at slow speeds for about one additional mile when the car came to a stop on Route 1 in front of Big Al’s.

In the process of stopping the Range Rover, Lapomarda side-swiped a Wiscasset police cruiser operated by Chief Larry Hesseltine. The estimate for repairing the damages is $1,100.

Wiscasset police officers and deputies from the Lincoln County Sheriff’s Office then took Lapomarda into custody.

Wiscasset Emergency Medical Service transported Lapomarda to Brunswick Hospital with a Wiscasset police officer on board for evaluation. Lapomarda was charged with eluding an officer, criminal speed, passing a roadblock, and reckless conduct, according to the press release.