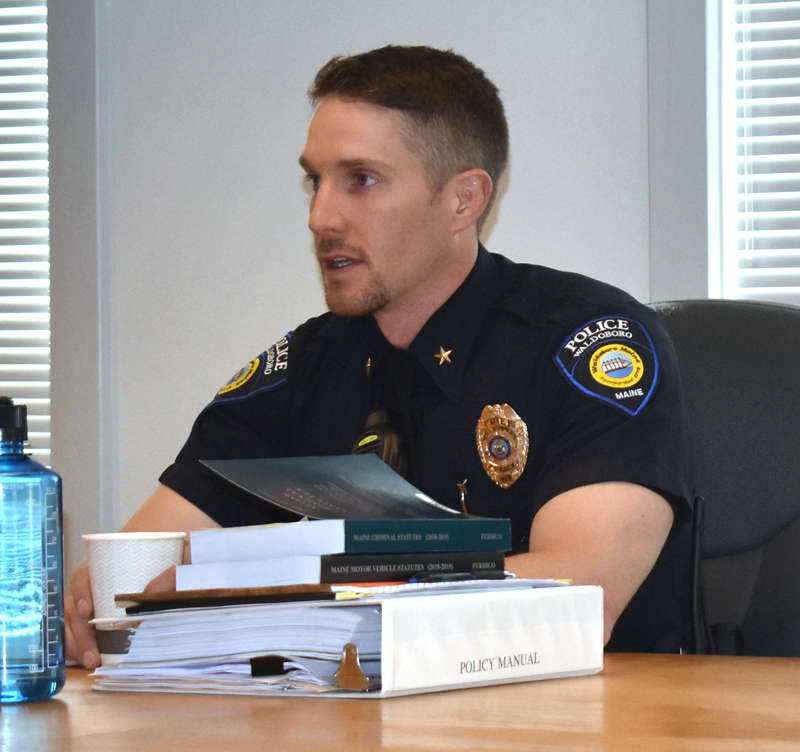 Waldoboro Police Chief John Lash fields a question during a meeting at the municipal building on May 22. Lash is warning residents about scams that target the elderly. (Alexander Violo photo, LCN file)

Scammers pretend to be relatives and solicit funds to pay for fictitious accidents or legal problems. Others falsely claim a target has won a prize or contest to secure their financial information.

“The biggest thing we are seeing is, all these scams feed off of people’s emotions,” Lash said.

Lash hopes to help townspeople recognize common scams, understand how they work, and know what to do if a scammer targets them.

Details of the scams change all the time, he said, but scammers consistently target elderly residents and are very aggressive.

“One particular scam is, the caller claims to be a grandson or son who has been in an accident,” Lash said. To explain why they sound different over the phone, the caller will say they broke their nose.

One warning sign of a scam is a request for payment in a weird and specific way, or a directive not to tell anyone about the arrangement.

Lash advises anyone who receives such a call to hang up.

“If people answer them and talk to them, they’ll keep at it, but if you don’t give them the time of day, they’ll move on,” he said.

The modern con men and women use information available online, often on social media, to convince their targets they know them.

Lash said the scams are not new, but he has noticed a recent increase in activity.

“For some reason, within the last one to two years, this has been a weekly occurrence for us,” he said.

The Waldoboro Police Department posted a warning about scams on its Facebook page in August. Additionally, Lash met with the Medomak Valley Senior Citizens group to raise awareness about scams in July.

The police chief offered some basic tips for residents to guard themselves against fraudulent activities.

“Don’t give out any personal information over the phone and use privacy settings on Facebook,” he said.

“Someone older who is just getting onto Facebook may not realize everything is public and that they can turn on privacy settings. There is a ton of information on there and someone can find that, and when they call, sound like they know what they are talking about,” Lash said.

Even those who utilize privacy settings must exercise caution.

“I want people to be aware that there is no such thing as private anymore. Your information is out there, and just because someone knows something about you doesn’t mean they are legit,” Lash said.

Not all scams target elderly residents, Lash said. Some scammers tell their target they have a warrant out for their arrest and, for a fee, can have the warrant taken care of out of court.

If it seems too good to be true, it probably is, Lash said. He also urged residents not to pick up the phone for a number they don’t recognize.

Scammers are rarely local and often use false phone numbers, making their apprehension difficult if a case is brought to law enforcement.

When the victim of a scam comes into the police department, Lash said, there is not much he and his officers can do.

“Even if someone comes in with a number, when we call it back, it won’t lead anywhere or it will turn out to have come from a stolen number. U.S. Cellular deals with that all the time and these calls can come from local numbers,” Lash said.

Despite the limits on what police can do, Lash urged anyone targeted in a scam to contact law enforcement and tell their neighbors.

“Don’t be embarrassed. Let us or somebody know about it. Even if you don’t fall for it, get the word out,” Lash said.