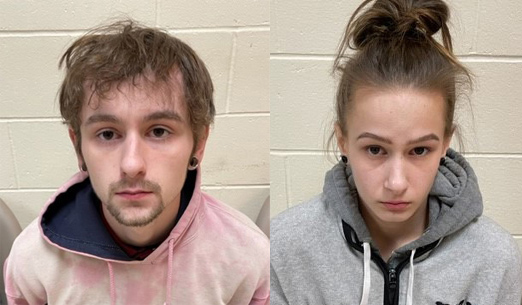 A pair of Whitefield residents was arrested and faces criminal charges following an execution of a search warrant on a Beech Lane residence, Friday, Nov. 25.

According to the Lincoln County Sheriff’s Office, Casey D’Orio, 19, was charged with criminal threatening with a dangerous weapon after he allegedly pulled a gun and pointed it in the direction of two teenagers during an altercation at Maritime Farms in Jefferson last week.

Also arrested Rylie Cowette, 19, faces a separate burglary charge, which follows an investigation into an alleged break-in at the Whitefield Market during the early morning hours of Saturday, Nov. 12. During the break-in, approximately $400 in liquor, tobacco, cigars, and cigarettes were taken. The business also sustained approximately $800 in damage. Additional charges are expected.

According to the LCSO, D’Orio was arrested after an investigation into an alleged incident that reportedly occurred at about 7:15 p.m. on Wednesday, Nov. 23 near the fuel pumps at the gas station on Route 32.

According to the LCSO, while at the fuel pumps, D’Orio got into a verbal altercation with two teenage boys in the car behind him. D’Orio admitted to first displaying the gun in his waistband and then pulling the gun out and pointing it in the direction of the two teens, according to the sheriff’s office.

Both subjects were taken to Two Bridges Regional Jail in Wiscasset and later released on bail pending a later court appearance.

During the investigation, two members of the public came forward with helpful information leading to this arrest, according to the LCSO.