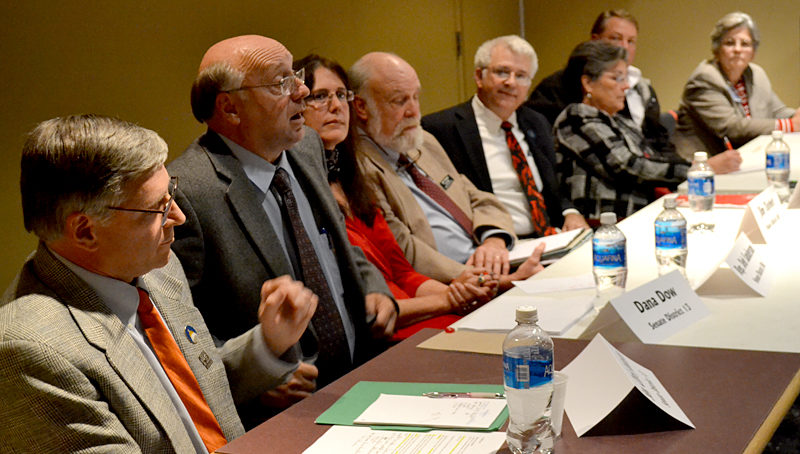 Candidates for Senate District 13 and House Districts 88, 90, and 91 participated in the forum, the second of two hosted by The Lincoln County News.

After introductions, the candidates spent a majority of the forum discussing how the Legislature could help grow the state’s economy. 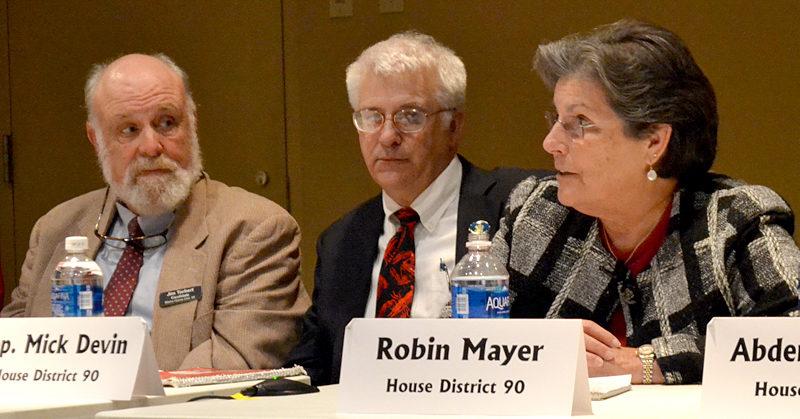 From left: Jim Torbert and Rep. Mick Devin look on as Robin Mayer speaks during a candidates forum at Skidompha Public Library in Damariscotta on Thursday, Oct. 13. The forum was the second of two hosted by The Lincoln County News. (Maia Zewert photo)

“We cannot live by tourism alone. We need to do something to make a more vibrant economy to bring in young people and businesses,” said Robin Mayer, R-Damariscotta.

In order to attract people to live in Maine, the state needs to have affordable housing, Mayer said.

“With the jobs available today, you can work almost anywhere. If you have a laptop, you have an office,” Mayer said. “We need to attract young people to live here, and we need to have housing and activities here for them.”

Devin said there are some steps the Legislature could take to keep young people and families in the state. One possibility is to assist graduates with their student loans for a period of time if they were to work in Maine after graduation, he said.

In addition, the state needs to update its “antiquated” tax code, Devin said.

“It seems like every two years or four years, we make an attempt to update it. What we need to do is sit down with a bipartisan crew and go through and develop that policy that will take us into the 21st century,” Devin said.

Candidates also discussed what can be done to bring jobs back to the state. 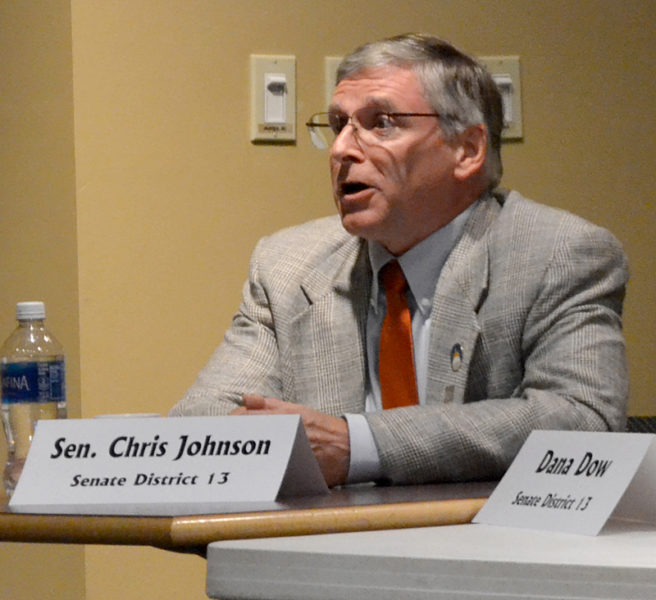 “There are many small, micro businesses that are functioning well,” Trask-Eaton said. “What gets my attention is these successful businesses that are built by the people who live here. If they have a bad year, they don’t close up shop and go somewhere else. They tough it out, they keep going, and they keep growing.”

Senate District 13 Sen. Chris Johnson, D-Somerville, said one of the ways Maine could bring in more jobs is by building on the state’s strengths, including the work ethic of its people, in an effort to increase the number of jobs in Maine.

Senate District 13 includes all of Lincoln County except Dresden, plus Washington and Windsor.

The state has a number of opportunities to expand with alternative energy, including solar and wind, which would bring jobs into the state, Johnson said.

House District 91 candidate Abden Simmons, R-Waldoboro, called for an expansion of vocational programs, including boatbuilding, to help train a workforce for industries that exist in the state. 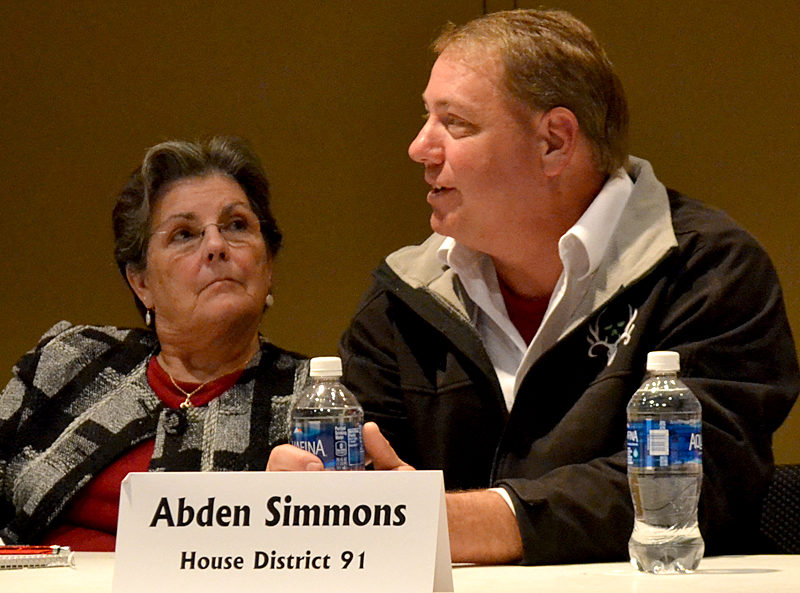 “I think the biggest problem is we don’t have enough education in any field that we have in the state of Maine,” Simmons said. “There are all kinds of boatyards that are desperate for workers, but they can’t find a skilled workforce.

“It will keep kids here, because if they can learn a trade here, they’re liable to stay here, especially if it’s a trade in Maine,” Simmons said.

Dana Dow, who is challenging Johnson in Senate District 13, said the state needs to do more to reduce regulations on businesses and the hurdles for businesses that wish to set up shop in Maine.

Dow is the president and co-owner of Dow Furniture Company in Waldoboro. He previously served two terms in the Senate and one term in the House.

“We can’t say we want to grow jobs and then beat on the businessmen that are going to produce these jobs and grow industries in Maine,” Dow said. “We need to take the gloves off and let the businesses build their businesses the way they know best.”

The candidates also had mixed opinions on two referendum questions voters will decide in November and the impact both questions, if passed, will have on business around the state.

House District 88 Rep. Deb Sanderson, R-Chelsea, said the minimum wage and surcharge ballot measures would be a “double whammy” on small businesses if voters approve them. District 88 consists of Chelsea, Jefferson, part of Nobleboro, and Whitefield.

Question 4 would raise the state’s minimum wage from $7.50 to $12 by 2020. If the referendum passes, there could be a number of unintended consequences, including less job availability for young adults and people without prior work experience, Sanderson said.

“There’s going to be a lot of young kids working in the summertime trying to save money for college who will probably not be able to get a full-time job because of what the minimum wage is going to be,” Sanderson said.

Jim Torbert, the challenger for House District 88, said if the minimum wage had kept pace with what it had been when he was in high school, it would already be at $12 an hour.

“Every time in our history the minimum wage has been proposed to be raised, there’s been alarmist cries that the end of the world is coming, that there’s going to be huge inflation and small businesses are going to be driven underwater. It’s never happened,” Torbert said.

The candidates agreed that if the minimum wage referendum does not pass and the Legislature takes up the issue, they would be willing to compromise on the measure.

Another question would apply a 3 percent surcharge, or tax, on the portion of taxable household income exceeding $200,000 per year. The funds raised from the surcharge would be used for public education.

“If you have a taxable income after you spent money on employee benefits, the expansion of the business … if you removed all those things and you still have $220,000 in taxable income, 3 percent of $20,000 is $600,” Johnson said. “That’s what you’ll end up paying to help keep the schools functioning without the burden falling on property taxes and the people trying to stay in their homes.”

Dow spoke against the proposed surcharge and said it would impact 16,000 people across the state, including 11,000 businessmen.

“The money they will have to pay for this tax cannot go to pay raises, or benefits, or health insurance for these businesses,” Dow said. “You’re literally taking money out of the pockets of the middle class if we do this.”

Candidates also took questions from the audience during the forum.

The first candidates’ forum was held in Wiscasset on Thursday, Oct. 6 with candidates for Senate District 23 and House Districts 53, 80, 87, and 89 participating.