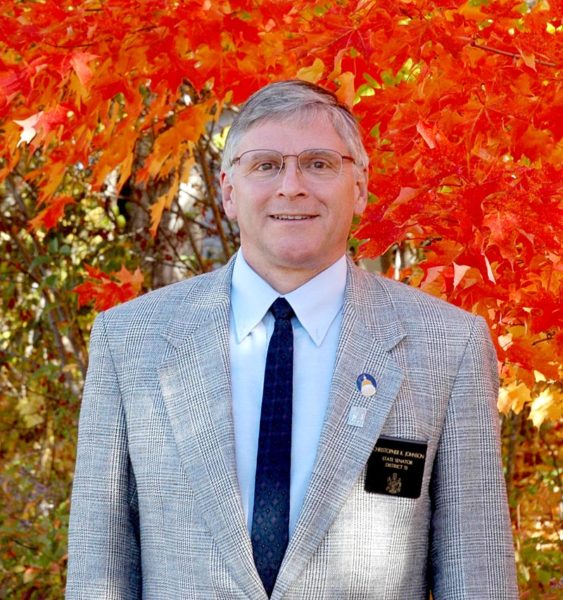 The state senator for the majority of Lincoln County is looking to continue working to ensure Maine residents can live and thrive in the state.

Sen. Chris Johnson, D-Somerville, has sat in the Maine Senate since February 2012 and will face Republican challenger Dana Dow in the November election.

“There has been a hollowing out of opportunities for people to hold decent, middle-income jobs. But there are so many opportunities to turn it around by building on Maine strengths,” Johnson said.

He said two critical components of attracting companies in this manner are a capable and educated workforce, in addition to sufficient infrastructure.

Johnson said agriculture is one area of opportunity.

According to Johnson, Maine is the only state where the number of farms is growing and the average age of farmers is going down.

He said with the proper support from Augusta, the state’s farming industry could attract even more individuals to the state’s agricultural sector.

“Our Maine producers are competing against a very unlevel playing field. Anything we can do to help our really excellent quality food production to compete is important,” Johnson said.

Johnson said agriculture is not the only important production industry in Maine, listing commercial fishing as another integral field of economic activity.

“We have the biggest opportunity in terms of seacoast and farmland and young people interested in achieving growth,” Johnson said.

In addition to employment, Johnson sees infrastructure as an issue that needs to be addressed at the state level.

“We have a lot of work to do in Maine on infrastructure – ports, roads, and bridges,” Johnson said.

Johnson said he believes investment in infrastructure is an economic multiplier that not only creates job opportunities, but also helps businesses reach their customers.

One such area is renewable energy, said Johnson, listing both solar and wind as options.

“We have a singular opportunity to build off what (the University of Maine at) Orono has developed for floating platform technology,” Johnson said.

According to Johnson, the Gulf of Maine has 156 gigawatts of capacity for wind power.

“The wind is blowing more than 22 miles per hour 90 percent of the time. If we don’t seize the opportunity to generate power and move off of fossil fuels, then we’re really doing Maine a disservice,” Johnson said.

He said industries such as solar and wind are areas where the state can create direct economic benefits in addition to long-term environmental benefits.

“Renewable energy is an opportunity to tackle climate change while getting more revenues for the state of Maine,” Johnson said.

“A reliable internet connection provides a larger opportunity for trade and commerce for farms to every nature of business trying to serve and reach customers,” Johnson said.

He said he believes high-speed internet is a way to attract not only businesses, but also individuals to Maine.

“It’s a reason people may settle here and work remotely and have the natural surroundings. We have got to remove the obstacles to that,” Johnson said.

Johnson said there is the potential to create 4,000 jobs in the health care sector, $5 million in additional economic activity, and $30 million in savings on current programs.

“It’s really important, not only for jobs, but because so many people don’t have the access they need,” Johnson said.

In terms of the state and region’s ongoing opioid crisis, Johnson said there needs to be prevention programs and described a three-pronged approach to tackling the issue.

He said there has to be enforcement to stop drug trafficking, treatment to turn lives around, and prevention that utilizes evidence-based programs in schools to reach youth and make them aware of the importance of not getting involved with addictive substances.

“We have to provide more funding for prevention programs,” Johnson said.

Responding to the concerns of a constituent, Johnson was instrumental in starting the Lincoln County Recovery Cooperative with local law enforcement agencies, based on similar programs implemented in Scarborough and Gloucester, Mass.

Chris and his twin brother, David, were born in Fitchburg, Mass. and spent their early years in Ithaca, N.Y.

Johnson then moved to Maine and attended junior high and high school in Bangor.

He graduated from Bangor High School in 1975 and went on to receive his bachelor’s degree in physics from the University of Maine at Orono in 1979.

After college, Johnson found work in Augusta. He still lives in Somerville, in the same house he built over 30 years ago for his family.

Johnson was elected to the Senate during a special election in 2012, defeating Dow in a race to succeed former Sen. David Trahan, R-Waldoboro. Johnson  sits on the Judiciary and Government Oversight committees in Augusta.

Johnson is the former director of information technology for DeskNet Inc., a company with offices in Portland and Jersey City, N.J.

Johnson and his wife, Valarie Johnson, have two daughters and four grandchildren.