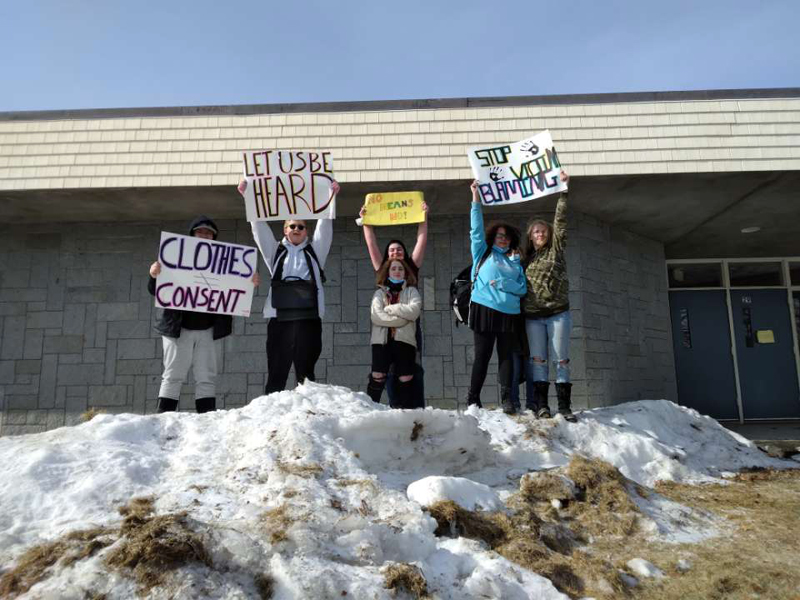 Students at Medomak Valley High School in Waldoboro stage a walkout to raise awareness around sexual violence. Students want more education on issues of consent and more responsiveness to their concerns on the part of school administration. (Photo courtesy Sage Cunningham)

A wave of students walked out of Medomak Valley High School and Medomak Middle School on Monday, Feb. 14.

Their goal was to shine a light on sexual violence and to challenge school administrators to more effectively address student concerns.

“I’m really glad that all this happened and I was brave enough to do it,” said Eliza Luce, a sophomore at MVHS and one of the organizers. The attention of news media amplified the students’ voices and Luce is appreciative of the level of support from the community and hopeful that positive change is on the horizon.

Sage Cunningham, whose pronouns are they/them/theirs, is a junior at MVHS. “People deserve to be listened to,” they said.

Cunningham has friends who have been affected by sexual violence and not gotten the help they need. Participating in the walkout was a way to stand up for them.

MVHS senior and student representative Owen Weber did not participate in the walkout, but in a Feb. 22 email, he called those students who did participate “some of the bravest of our school community.”

The issue of sexual assault “has become increasingly prevalent … as more survivors … begin to speak out and tell their stories,” Weber said. “When you are a student who has peers who have experienced sexual assault, the problem becomes far more serious.”

Luce said the walkout came together quickly. Three or four students spearheaded the plan, and information was shared in group chats, on social media apps like SnapChat. They decided to schedule the walkout for two days so that students who attended the vocational school on Monday would have an opportunity to be involved.

More students joined in; signs were made. The administration was informed of the student’s intent in advance and according to Cunningham, Principal Linda Pease was supportive as long as adults were on hand to ensure student safety.

In a message on ParentSquare, an app that facilitates communication between schools and parents, Pease underscored that students were not prohibited from protesting, but that the protest was an unexcused absence based on RSU 40 policy and work missed could not be made up.

While Luce doesn’t necessarily agree with the school’s response – “it’s not like we’re walking out for no reason,” she said, “I think it’s good to learn … there’s probably going to be consequences and to take those. I think it’s kind of empowering.” 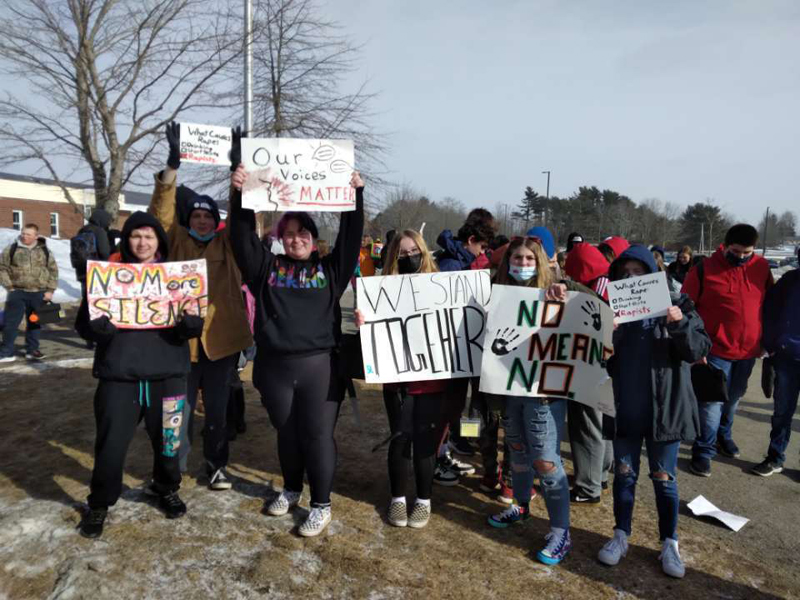 The participation of Medomak Middle School students was not expected. “I didn’t even really know until we walked out and people were like ‘oh yeah, the middle schoolers are coming – look,’ and we looked across the parking lot and a whole group of them were walking over,” Luce said.

Cunningham said the younger kids likely heard about the walkout from older siblings, from notes passed in bathrooms, or from social media.

While a sexual assault lawsuit involving a former MVHS principal is back in the news as a court date nears, Luce and Cunningham both said there was no correlation between that situation and the walkout. Cunningham was not aware of the suit until after the walkout.

Luce and Cunningham consider the walkout a success. They are already seeing positive changes. But there is room for more.

According to Cunningham, speakers from Sexual Assault Support Services of Midcoast Maine (SASSMM) have been invited to the school to address topics of sexual violence.

“I’d like to see more classes and (the concept of) consent being taught in the school system,” Luce said. “I talked to a lot of people who only recall one unit on the topic in middle school and that’s about it.”

Luce said she herself did not have a clear understanding of what constituted sexual assault or sexual harassment or how best to respond when placed in uncomfortable situations.

While Weber believes that teachers and administrators at MVHS take the topic very seriously, he sees room for more consistent formal coursework to “keep the message fresh in students’ minds.”

Nolan went on to stress the importance of understanding that details of sexual assault reports cannot be shared due to privacy laws.

“We are fortunate to have students who want to bring awareness to this serious topic … As time progresses we will analyze whether we need to plan and facilitate larger conversations …,” Nolan said.

Parents and community members added their voices to the discussion.

Rebecca Smith Waddell, whose son is a senior at MVHS, posted on Facebook: “No matter what anyone feels about protests during school hours, the students are raising awareness for a reason. I think the political aspects of running a school make it difficult for a student to feel heard because these days you never know what actions, if any, are taken…We can do better, and these kids are trying to make that happen for their generation.” 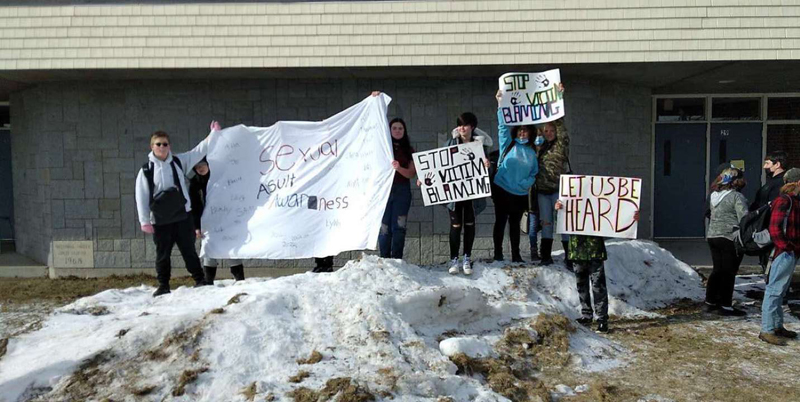 Students at Medomak Valley High School in Waldoboro stage a walkout to raise awareness around sexual violence. The walkout took place on both Feb. 14 and 15 so that all students would have a chance to participate. (Photo courtesy Sage Cunningham)

Chad Benner, a military veteran, has children in both middle school and high school in Waldoboro. Benner expressed support for both students and educators when responding to a discussion thread on Facebook: “It would be great for staff to engage with students and discuss how to demonstrate in a manner that is covered by their school’s policies and procedures. Teaching them the process of organizing demonstrations (and) working with governing bodies is the way forward. I praise the students for their willingness to stand for what’s right, and I praise the administration for enforcing published policies governing students.”

Cunningham’s mother, Elizabeth Lowell, said of the walkout, “I think it was very brave of them. And necessary. And I think that they are sharing a message that adults are too scared to talk about.”

The National Sexual Violence Resource Center defines sexual violence as any type of unwanted sexual contact, whether words or actions, that occur against a person’s will and without their consent.

Consent must be freely given and informed, and a person can change their mind at any time.

According to the National Sexual Violence Resource Center, sexual violence happens in every community and affects people of all genders and ages.

Those who need help can call the statewide sexual abuse helpline at 1-800-871-7741 to talk to a trained advocate. The service is free and private.

Additional information on sexual violence and a youth resource kit can be found at sassmm.org.

MVHS also has a program called Peers Assisting With Sincerity. According to Weber, “the primary purpose of PAWS is to have an organized group of students present to spread school spirit and to help their peers navigate the school environment.”

Weber said students who may be wary of adults may be more likely to seek out a peer who has connections in the school and who can point them toward the appropriate resources.