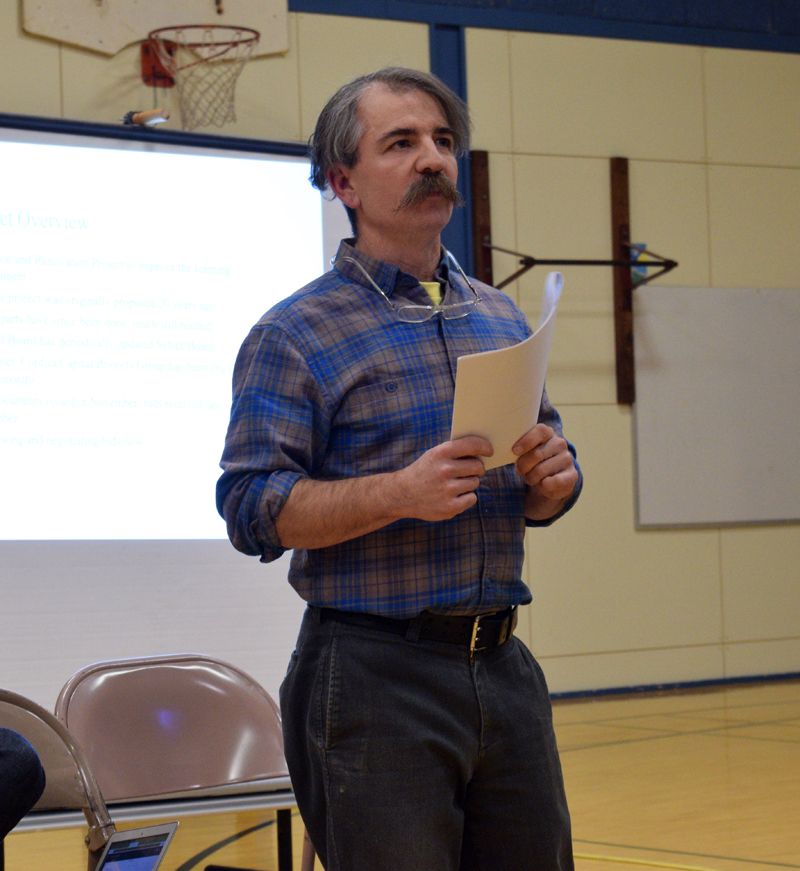 Bristol Consolidated School Committee Chair Darin Carlucci explains the reasoning behind the committee’s proposal for a $6 million-plus addition and renovation to the school on Thursday, Jan. 5. The addition will be a cafeteria and multi-use community space that can be used for voting and other municipal functions. (Evan Houk photo)

The Bristol School Committee chose Portland’s Optimum Construction Co. as the contractor for the $6.4 million-plus addition and renovation project at Bristol Consolidated School its regular meeting on Wednesday, Jan. 4.

About 25 people attended a presentation about the details of the project held in the Bristol Consolidated School gymnasium the following evening on Thursday, Jan. 5.

The bid from Optimum Construction Co. must be formally approved by voters at annual town meeting on Monday, March 20. Voters will also consider an $8 million bond to finance the project.

Carlucci outlined the goals of the project, which include providing increased security to students and staff, saving on annual costs by improving electric and heat efficiency, making the building compliant with the Americans with Disabilities Act, increasing space for students, and building a cafeteria that can double as a multi-purpose community room.

A net of two new classrooms will be gained, three-phase power will be added to the building, and heat pumps will be installed throughout.

“We’re looking for a more flexible, contemporary feel for the school,” Carlucci said.

Carlucci explained that a similar project was proposed 20 years ago but ultimately voted down by the town.

He said that student population has increased and the school still needs a cafeteria, a sprinkler system throughout the entire building, and a replacement for the “antique” air exchange system.

The school also does not have an Americans with Disabilities Act-compliant bathroom, which it will after the renovations.

Carlucci noted that the project is a “modest proposal” just to cover basic needs of the school building.

Classrooms will be renovated and expanded to create more space for students, Johnston said. This will give students a dedicated art room, spaces for occupational and physical therapy, and a 1,061-square-foot technology space for activities related to STEAM, an integrated approach to learning science, technology, engineering, arts, and math subjects. 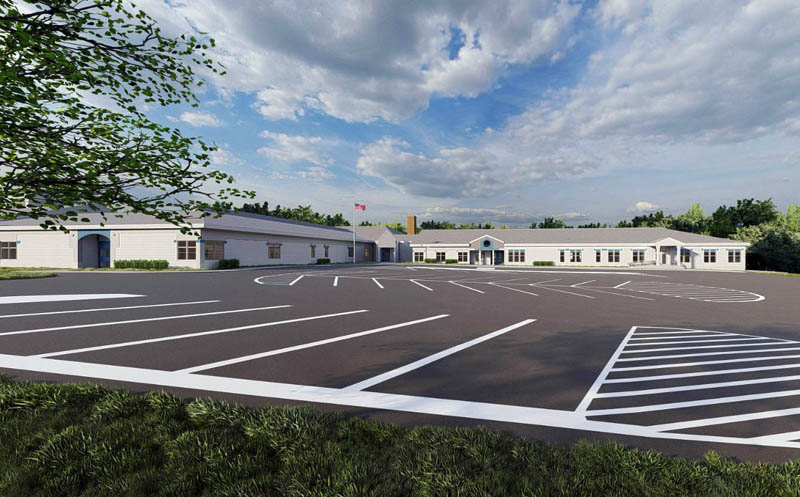 A rendering of the Bristol Consolidated School shows a new entrance to a cafeteria and multi-use community space on the right side of the building, the northeastern corner, following a planned $6.4 million-plus addition and renovation project. If approved at annual town meeting in March, construction is expected to finish by winter 2024. (Image courtesy AOS 93)

“Many of our kids want to do hands-on projects and learn differently,” Johnston said. “We think the benefit to the students will be immeasurable.”

There will be a separate entrance that will allow for the space to be used for municipal functions such as voting while school is in session.

An addition will be added on the northwestern corner of the building, which will include new classrooms and bathrooms, and replace the portable classroom that is located behind the building currently.

Ribeiro also said that the current kitchen will be converted into the technology, or STEAM, space.

A new teachers’ room will also be created through the renovations to allow a space for staff to meet other than the library, Ribeiro said.

Because of a year-long lead time on some items due to supply chain issues, like the three-phase electrical power, Butler explained that construction cannot start until spring 2024 at the earliest, assuming approval of the project at annual town meeting.

The new addition will be constructed during the 2024 school year and the renovations will mostly occur in summer 2024 so there is no disruption to students’ learning, Butler said. The project is expected to be completed by winter 2024.

“Our whole goal is to make sure this project comes in on time and on budget,” Butler said.

The Bristol School Committee will next meet at 5:30 p.m. on Wednesday, Feb. 1.