Marlow Green, 7, left, explains how the enrichment tool he designed for a tarantula will encourage the spider to climb and explore while Azalea Powell, 7, observes at the Chewonki Elementary and Middle School in Wiscasset on March 4. (Bisi Cameron Yee photo)

Teacher Lorna Fake came up with the project as a way to fulfill core curriculum requirements in science through interaction with the wildlife in Chewonki’s Travelling Natural History program.

Chewonki is home to a variety of birds, bugs, mammals and reptiles that have been rehabilitated but, for a variety of reasons, would not survive in the wild. Those animals now serve as animal ambassadors to schools and communities throughout Maine.

“I know children love making things,” Fake said of her inspiration for the project. “And we wanted to spend time looking at animals and … learning observation skills.”

Designing and building enrichment tools to provide comfort or stimulation to the animal enclosures checked off a number of educational and developmental boxes, including critical thinking and mutual cooperation. Fake said several students melded their individual projects into one larger project, making a series of tunnels for “Adder,” Chewonki’s resident milk snake.

Students began by observing the animals, how they behaved in their environment, how they responded to stimuli. Some animals liked to hide, some were curious, some were food-motivated.

The kids used their observations to decide which animal they wanted to build for and what they wanted to make. Next came a design sketch based on their notes. Materials were chosen: Cardboard tubes, egg crates, string, plastic containers. And tape. Lots of tape. The use of recycled material was one of the required elements of the project, with tape being the only one-time use item.

As they started to build, science educator Colleen Moureaux visited their classroom and gave suggestions to help tailor their designs.

“All of them had really great ideas,” she said. “They really planned it out and were thinking what materials they have … how big it was going to be.”

The students focused on the animals’ likes and dislikes and trying to find what Moureaux called “something that would bring joy to (the animal).”

Learning happened throughout the design process. One project initially involved placing crickets on tape so a tarantula could catch them more easily. But adjustments were made when the student determined that the tape would catch the tarantula too. The design changed to contain the crickets in a cup deep enough to prevent their escape.

Once built, students observed their chosen animal interacting with the enrichment tool. Was the animal interested? How did it use the tool? Was the project successful? How could the design be improved? 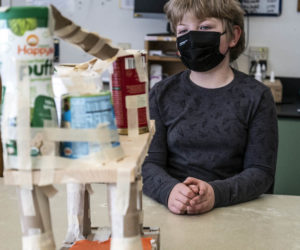 Francis Kahrl, 9, waits patiently for a tarantula to be introduced to one of his classmates’ animal enrichment projects at the Chewonki Elementary and Middle School in Wiscasset on March 4. Students know to move slowly, and remain quiet and focused as they observe animal interactions with their designs. (Bisi Cameron Yee photo) 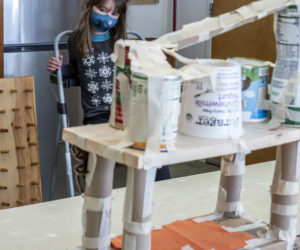 Penny Lee, 7, watches from a respectful distance as tarantula Tula explores an enrichment tool at the wildlife center at the Chewonki campus in Wiscasset on March 4. Lee and her fellow students have learned that the spider will not hurt them, but they also know that it needs space to feel comfortable exploring its surroundings. (Bisi Cameron Yee photo) 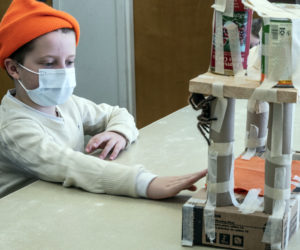 Marlow Green, 7, observes how a tarantula interacts with the enrichment tool he designed for it at the Chewonki Elementary and Middle School in Wiscasset on March 4. Green initially built the structure as one level, but decided to add a second tier to give the spider more to explore. (Bisi Cameron Yee photo) 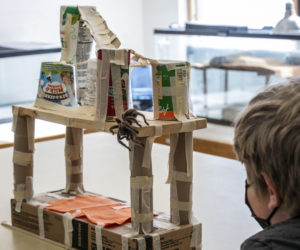 Francis Kahrl, 9, observes a tarantula as it moves slowly down an enrichment tool created by a fellow student at the Chewonki Elementary and Middle School in Wiscasset on March 4. Kahrl knows that the “tiny little hairs” on the tarantula’s feet will help it figure out how to descend the column. (Bisi Cameron Yee photo) 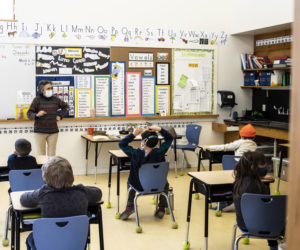 Students listen to teacher Lorna Flake while in class at Chewonki Elementary and Middle School. The independent school follows the state’s curriculum requirements while engaging students in the natural world through projects like building enrichment tools for the animals in Chewonki’s wildlife center. (Bisi Cameron Yee photo) 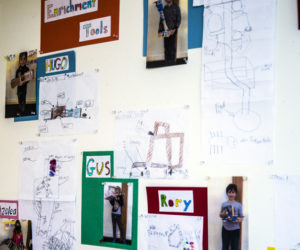 One wall of a classroom is decorated with schematics of animal enrichment tools at the Chewonki Elementary and Middle School in Wiscasset on March 4. The plans were drawn up by 1st and 2nd graders and then built and presented to animals in Chewonki’s Traveling Natural History Program. (Bisi Cameron Yee photo) 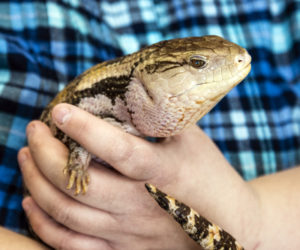 Science educator Colleen Moureaux holds a blue-tongued skink in the wildlife center at Chewonki in Wiscasset on March 4. These skinks only extend their vividly colored tongues when nervous or frightened. (Bisi Cameron Yee photo) 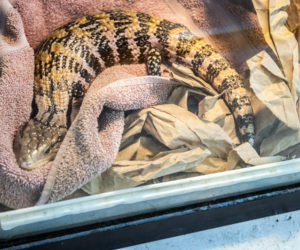 A skink native to Indonesia, enjoys the nap area in her enclosure in Chewonki’s wildlife center in Wiscasset on March 4. Providing areas where they feel safe was one consideration when Chewonki students designed enrichment tools for the animals in Chewonki’s Traveling Natural History Program. (Bisi Cameron Yee photo) 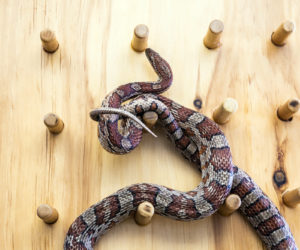 A corn snake winds her way around an enrichment tool built specifically for her at the wildlife center at the Chewonki campus in Wiscasset on March 4. The peg board was used as inspiration to encourage 1st and 2nd grade students at Chewonki Elementary and Middle School to design and build enrichment tools for the other animals at the center. (Bisi Cameron Yee photo) 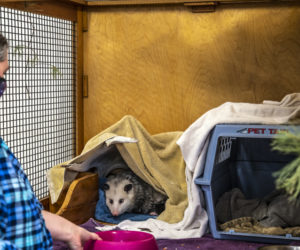 Science educator Colleen Moureaux tempts a possum with food at the wildlife center at the Chewonki campus in Wiscasset on March 4. Possums are highly food-motivated and the students used that information when planning enrichment tools for her. (Bisi Cameron Yee photo) 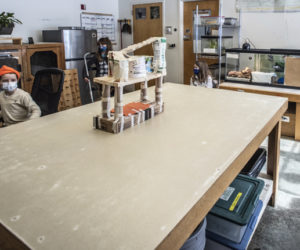 From left: Marlow Green, 7, Penny Lee, 7, and Azalea Powell, 7, gather around the observation table in the wildlife center at the Chewonki campus in Wiscasset on March 4. (Bisi Cameron Yee photo)

On March 4 three students, Francis Kahrl, Penny Lee, and Azalea Powell made their way to the wildlife center to observe the introduction of an animal to the enrichment tool created and built by seven-year-old Marlow Green. He designed a climbing structure for the tarantula, with food in the form of crickets as a motivating factor.

Moureaux gently removed “Tula,” a rose-haired tarantula native to Chile, from her cage and placed her at the base of the cardboard tower. Tula tentatively touched the base as if asking, “Is this a hiding spot for me?”

“A lot of times kids are very nervous about spiders,” Moureaux said. “So if this associates good feelings toward them, it benefits the child and the animal.”

“The only thing I’m worried about is if the tape is dry or not,” Green said.

The students dispersed around the table. “If Miss Tula’s coming toward you, do we need to be nervous?” asked Moreaux.

Moreaux explained how a tarantula uses a small amount of venom to incapacitate her prey. “It’s about the same amount as a bee sting,” she said.

Moureaux asked the students how spiders eat and Penny Lee identified the “pedipalps,” or pincers that the tarantula would use to grasp its food.

Moureaux moved the spider to the top of the structure and Tula began to climb down one of the columns. “Remember she’s feeling with her feet so she’s wondering if she can make that climb. What’s on the bottom of their feet to help them (climb)?”

After the students completed their observation and returned to their classroom, Moureaux gathered Tula up in a pooper scooper repurposed as a tarantula transport.

“At the beginning, depending on the animal, a lot of kids will be ‘eek’ at first,” she said as she returned the spider to its cage. “And then the more they see them the less they’re ‘eeked’ by them.”

Moureaux described how watching an animal like a snake “doing something … that’s kinda cute, getting to see (it) move around, builds that empathy and the comfort of ‘OK, this animal is not dangerous. It’s not out to hurt me.’”