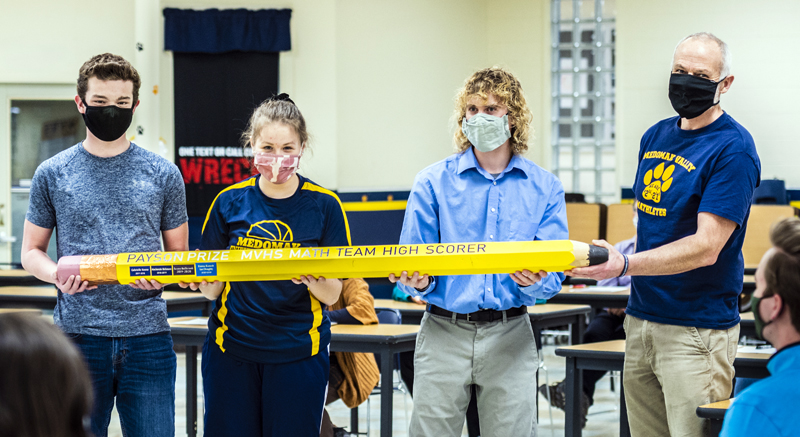 From left: Ian Doughty, Emma Kunesh, Zachary Melvin, and Bill Hinkley hold the Payson Prize, which goes to the top scorer for the season on the Medomak Valley High School math team. Doughty and Kunesh tied for the honor with 128 points each. (Bisi Cameron Yee photo)

Word problem: If the Medomak Valley High School varsity math team finished third and the junior varsity team finished 10th out of 19 schools in the Central Maine Math League; and if the team came in 23rd out of 98 schools in the state, finishing the year in the top 25% of competing schools; and if the varsity and JV teams have a combined total of 21 students between them, what is the cumulative effect of the three statements on the success of the math program at MVHS? Show your work.

Medomak Valley’s math team had an amazing year. And they are just getting started. Coach Bill Hinkley said the team had a ton of momentum at the beginning, but he anticipated that remote learning might make it harder to keep students involved. He was wrong. Students stayed involved. They came to practice. They participated in all five meets. And they had their best showing in years.

But the team did not get to go to the traditional capstone of the season. The state meet was canceled because the Maine Association of Math Leagues could not meet requirements for physical distancing at the Augusta Civic Center.

Hinkley and assistant coach Zachary Melvin could not let the year end on that note. They organized a final meet between students, teachers, and alumni, and on March 16, the students had the opportunity for one last blast of math.

Hinkley and Melvin recruited teachers from all subjects to participate — English, science, social studies. “And immediately the kids got so into it. It showed the kids that people who like academics and learning are willing to compete,” Hinkley said.

Science teacher Kevin Richardson was one of the willing. Richardson quickly realized that the students had the advantage. “I haven’t done this in so many years. It’s hard to remember back that far,” he said.

The meet was based on the format of the state competition: an individual round with three problems; a team round with six problems worked collaboratively; and the relay round, when students solved problems before passing them back to their teammates for the next leg.

At the end of the day, the students came out on top.

Prizes were awarded — the Neal Payson Prize for the top scorer on the team went to Emma Kunesh and Ian Doughty, who tied for the season high with 128 points each. A special prize was given to Richardson, who, despite being a teacher, took a competitive interest in solving the team’s “problem of the day.”

Hinkley said Medomak “has had strong math teams in the past — the school was once called ‘the Bowdoin of the North.’” But it’s been a while since they’ve had a team this strong.

“This is the best team in at least 15 years,” Hinkley said. He credits this year’s success to the senior class, “a lot of very strong kids always raising the bar.”

But Hinkley sees the upcoming potential clearly. And he’s not the only one.

Outgoing senior, math team member, and student representative to the RSU 40 school board Sean Sebrey said in his presentation during a March 18 board meeting that for the team to be in the top 25% of the state was a remarkable achievement. “But even more impressive, our B team was better than half the A teams,” he said.

Daniel Vannah, Quinn Overlock, and Liam Smith are all on the B team. Vannah, now in his second year on the team, will be a senior next year. Overlock, a sophomore, and Smith, a freshman, are new to the team. All three plan to stay with the math team, and all three foresee futures that include math.

The three met before school on Monday, March 22, over Zoom, to discuss their experiences with the team this year.

“We have all of our schoolwork and it’s easy to get consumed in that — but to have something that you’re doing just because it’s fun was valuable to me,” Smith said.

Overlock said, “I appreciate the way Mr. Hinkley and Mr. Melvin really pushed us. … They’ll show us a super-hard problem but help us persevere through it until we solve it so that we understand it every step of the way.”

Vannah said, “There’s so much we gain from just practicing. Mr. Hinkley gives us these big packets and we’re like, ‘oh no,’ then we get to the end and we’re like, ‘We got this, we understand this now.’”

The conversation turned to the ways in which the pandemic impacted the season.

“We had to change because of COVID and we learned to work past problems, not just on paper but in real life — it taught us a lot of patience and problem-solving skills,” Vannah said.

Overlock said, “I think that it really helped me grow as a person, not only academically, but it really taught us how to persevere all year long, whether it was to get everybody logged in to a meet or a five-point math problem.”

Smith said, “It was kinda weird with COVID and everything — we didn’t really need our teammates in the same way that we maybe normally would. But it was fun, it was educational, and that’s all that it really needs to be.”

Hinkley sees the merit in their perspectives. “It might help improve participation if schools can offer remote practices, remote meets,” he said.  “We need to use COVID as an opportunity to make changes.”

MVHS seniors “are going into computer science and mathematics and engineering. What they’ve learned in math will definitely help them in those pursuits, but I hope they remember the fun of it,” Hinkley said.

As far as the JV team, Hinkley is looking forward to growth over the next four years. “It seems so hard at first but every year it gets a little easier, a little less daunting. That’s how we learn; we build on bits of knowledge.”

“I feel confident about next year,” Hinkley said.