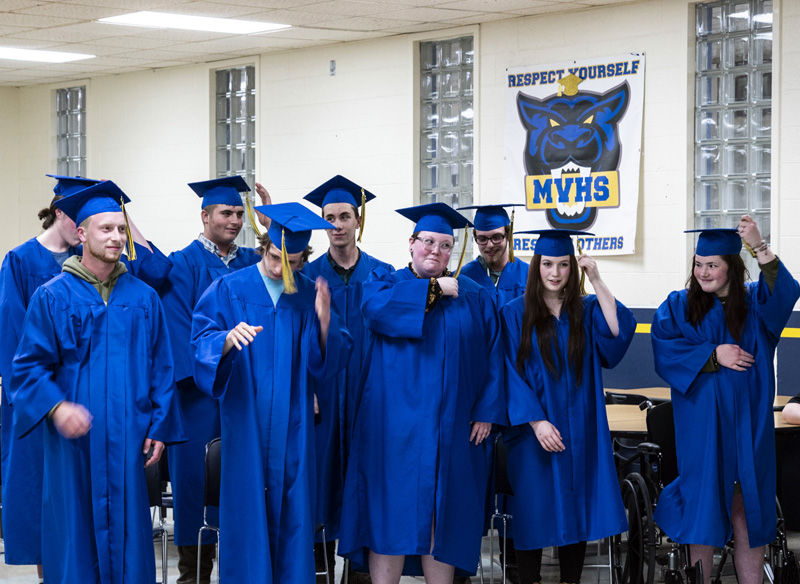 Midcoast Adult and Community Education graduates shift their tassels to the left at the completion of their graduation ceremony in Waldoboro on Thursday, June 9. (Bisi Cameron Yee photo)

In his speech at the Midcoast Adult and Community Education graduation ceremony at Medomak Valley High School on Thursday, June 9, graduate Austen Brewer called COVID-19 “a massive curveball.” He was a junior when the world shut down and he said he spent the next two years “kind of giving up on the idea of school.”

“COVID changed the way we had learned, changed the high school life,” he said. “People became more distant, social life all but disappeared. To me it just felt like it was more stressful and pointless to show up twice a week for class.”

Brewer went to work instead. “It went well. At first.” However, he soon realized that without an education he couldn’t move forward with the career goals he set for himself.

Brewer recognized the adult education teachers and support staff who he said always greeted him with respect, encouraged him, and pushed him further than he thought he could go.

He thanked Kayla Sikora, director of Midcoast Adult and Community Education, for helping, not just him, but all the students. Citing the “hours of conversations” they shared, he said Sikora cares as much about students as she does about their hopes and dreams.

“She never let me down,” Brewer said. “That’s big in this world.”

“Not to make this a sob story but my life has never been easy,” Keene’s speech began. “I’m alive today because I almost died yesterday.”

Keene survived a rollover on Route 1 in 2019 when she was 17. She was taken by LifeFlight to the hospital and, according to Sikora, it was uncertain if she would ever walk again.

According to Keene, the crash gave her her hardest challenge yet and “it will follow me until the day I die.”

“Every triumph has been exalted and every calamity has been grave,” Keene said. “But no matter how disadvantageous, it saved me.”

Keene said she got a second chance at everything: life, school, family.

“I have no other way to express my gratitude for living than to live,” she said.

Sikora said the class of 2022 saw a lot of younger adults joining the program.

“Students this year were a little more prepared,” she said. “They had already had some good instruction” from teachers in a traditional high school setting. COVID-19 interrupted their education and for some of them, affected their ability to return to the traditional path.

This year’s class ranges in age from 16-21. Two students are 16 and can’t test for their degree until they turn 17 in the summer. Those students will actually graduate a year earlier than they would have if they had followed the traditional curriculum.

Sikora said she would like to see the required path for her students change. As of now students must formally drop out of high school in order to be accepted into the adult education program. Sikora wants her students to have the ability to transfer into the program instead so there is no strike against either the student or the school.

She is excited about the recently announced free community college scholarship program that offers a full ride to Maine high school graduates from the classes of 2020 to 2023. There are no income or age limits, and the scholarship pays for up to two years of tuition.

The program was proposed in February 2022 and a supplemental budget that included $20 million in scholarships was signed by Maine Gov. Janet Mills in April.

According to the proposal, approximately 8,000 Maine young people are expected to benefit from the program, earning significantly more money over their careers than high school graduates and entering the workforce with high value degrees in high-demand areas.

The program, which is available at seven community colleges across the state, is also available to HiSET graduates and Sikora said several of her students “are definitely planning to take advantage of (the opportunity).”

“It’s really amazing that HiSET students are included,” she said, noting that students who follow alternative paths to graduation have been forgotten or left out of beneficial programs in the past.

Sikora is currently doing research for her doctorate on why students who are not successful in traditional high school find success in adult education.

“There are multiple pathways to high school completion,” she said.