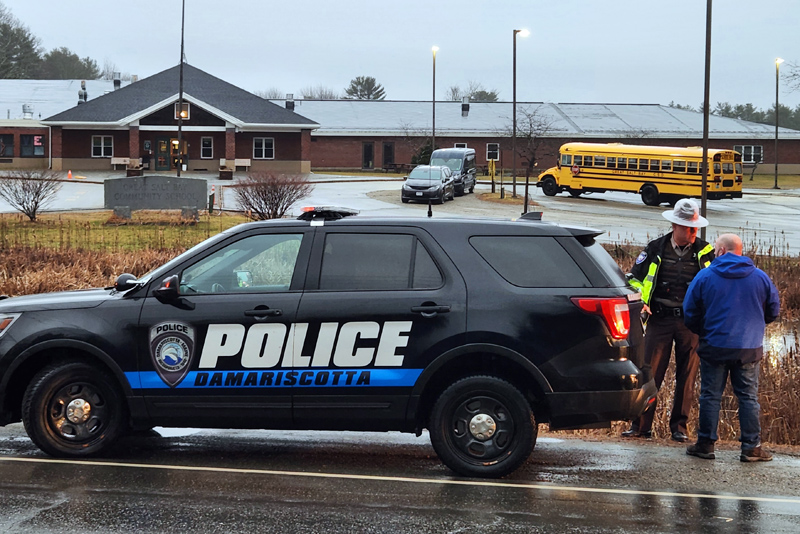 Damariscotta Police Chief Jason Warlick confers with Sgt. Kevin Dennison, of the Lincoln County Sheriffs Office, outside the Great Salt Bay Community School in Damariscotta on Friday, Jan. 13, after a hoax bomb threat canceled classes at the K-8 school for the second time in a month. The GSB School Committee indicated in a Jan. 14 statement that a false narrative has directly given rise to the threats the school has received. (Alec Welsh photo)

For the second time in 23 days, Great Salt Bay Community School in Damariscotta received an emailed bomb threat hoax that forced the closure of the school.

Classes at GSB were canceled Friday, Jan. 13 after the school received an email referencing bombs being placed in the school as well as the homes of four specific employees, according to a press release from the Damariscotta Police Department. The hoax threat closely resembles an incident from Dec. 21, when the school received an email about a bomb being placed in the building and in the homes of four employees.

All personnel inside the building immediately evacuated and there were no students in the school at the time the threat was received, which was around 7:20 a.m., according to the press release. Buses were rerouted to an off-site location, where police maintained a presence to assist with any safety needs.

In a statement sent Saturday, Jan. 14, the Great Salt Bay School Committee said a “false narrative” has directly given rise to the threats the school has received.

“Certain parties are spreading a grossly inaccurate and one-sided story to which the board cannot specifically respond, given our obligation to maintain the confidentiality of student and employee information, as required by Maine law,” the board said in its statement. “Unfortunately, that false narrative has directly given rise to the bomb threats that have disrupted our students’ education over the past several weeks.”

The school committee and district administration has been the topic of statewide discussion in the past month after the mother of a 13-year-old announced during the committee’s Dec. 14 meeting she had withdrawn her child from the school after learning that a school social worker had given a chest binder to the student without the parents’ knowledge.

A chest binder, or a chest-compression garment, is used to bind and flatten breast tissue to minimize outward appearance, according to the Cleveland Clinic, a nonprofit multispecialty medical center.

Lavigne also said in her statement the social worker asked the student to keep the chest binder a secret from the parents, which she said caused the student symptoms of “distress, anxiety, and depression.” The school’s staff conduct with students policy, which can be found on the AOS 93 website at aos93.org, prohibits the staff from “asking a student to keep a secret.”

District administrator did not return messages requesting comment on whether the social worker asked the student to keep the chest binder a secret. According to the school committee’s Jan. 14 statement, the board and school administration are not aware of “any violation of policy or law (that) requires further action at this time.” 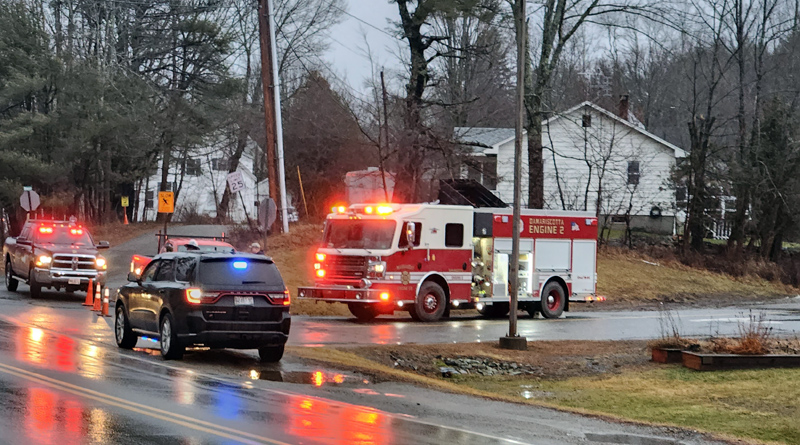 Responders stage outside the Great Salt Bay Community School in Damariscotta, Friday, Jan. 13 after a hoax bomb threat canceled classes at the K-8 school for the second time in a month. (Alec Welsh photo)

The matter was discussed again during the public comment portion of the school committee’s Wednesday, Jan. 11 meeting. Four members of the public, including a state representative, asked the committee specific questions related to the incident.

As he had at the Dec. 14 meeting, Great Salt Bay School Committee Chair Samuel Belknap laid out the guidelines for public comment, including the fact that the committee is not obligated to respond. The school committee did not respond to any of the comments made. In its Jan. 14 statement, the committee said it cannot respond because of its “obligation to maintain the confidentiality of student and employee information, as required by Maine law.”

Rep. Katrina Smith, R-Palermo, said she attended the meeting to represent lawmakers and parents who are “closely watching the situation” in the school district with Lavigne and her child.

“There has been no admittance of wrongdoing and seemingly no repercussions for the staff member who initiated this process,” Smith said.

Ed Thelander, Bristol resident and former Republican candidate for the U.S. House of Representatives 1st Congressional District, said he has had three children go through GSB Community School and it is “extremely disturbing that something like this happened.”

“At what point did the school know about it? And is that OK, is that authorized?” Thelander asked. “Who paid for it?”

Sandy Day, a former educator whose sons attended and whose grandchildren currently attend GSB, said a parent “should never be left out of decisions addressing a child’s sexuality or mental health.”

When reached for comment on Wednesday, Jan. 18, Lavigne, who previously said she planned on filing a complaint with the Maine Human Rights Commission, said she is “going a different route.” She declined additional comment and referred questions to her attorney, Brett Baber, of the Bangor-based Lanham Blackwell & Baber law firm.

Baber said that he and another attorney, who he was “not at liberty to disclose,” are preparing a complaint for federal court asserting that the school district violated Lavigne’s due process rights.

The complaint concerns a provision in the U.S. Constitution that “government entities may not violate the due process of citizens, specifically the rights of parents to be notified of governmental action concerning their children,” Baber said.

He said he expects the complaint to be filed within 30-45 days and a news release will be issued at that time. Baber declined further comment until the complaint is filed.

In its statement, the school committee said that federal and state laws both provide certain rights for parents and students with respect to education.

“While parents generally have a right to access the educational records of their children, the (school committee) must balance this right with the right of students in Maine who, regardless of age, have the right to access mental health services without parental consent (22 M.R.S.A. Section 1502 – Consent of Minors for Health Services), and the right to establish their own confidential counseling relationship with a school based mental health services provider (20-A M.R.S.A. §4008- Privileged Communications),” the school committee said in its statement.

Superintendent Lynsey Johnston sent out a letter to the GSB community on Jan. 13 in which she said that should the threats continue, the district intends to “make necessary changes to (its) emergency and security plans.”

District and school administration, the school committee, members of the school staff, the Damariscotta Police Department, and the Maine School Safety Center have been working together to increase the school’s safety measures, Johnston said. A parent information session is scheduled for 6 p.m. on Wednesday, Jan. 18, during which Damariscotta Police Chief Jason Warlick and school and district administration will lead a presentation about the safety plan.

The information session, which is limited to the parents and guardians of GSB students, is not a meeting of the Great Salt Bay School Committee and is not open to the general public.

The Great Salt Bay School Committee will next meet on Wednesday, Feb. 8.

(Editor’s note: The parent information session scheduled for Wednesday, Jan. 18 was canceled after this article was published.)