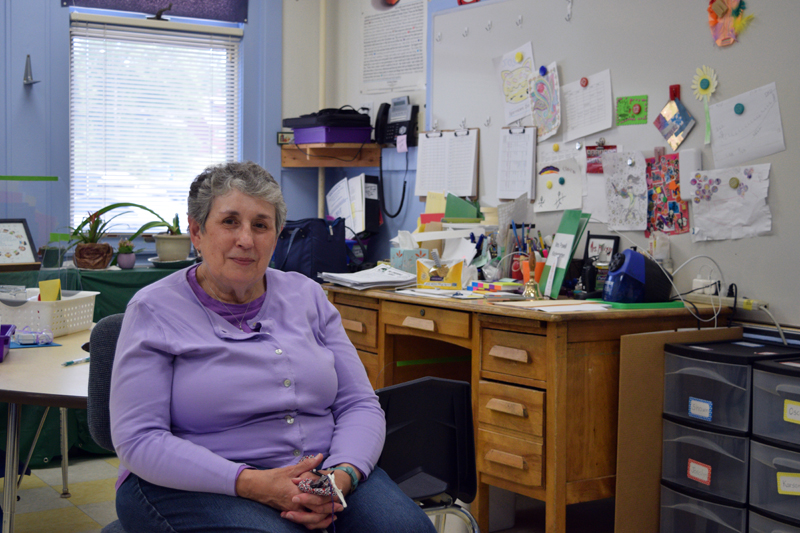 Andrea Powell sits in her classroom on Monday, June 14. It the same classroom where she attended kindergarten in 1960 and it is where she has completed her career as an educator. (Nate Poole photo)

After 43 years of teaching, 39 of which were at Bristol Consolidated School, Andrea Powell has retired.

At 10 a.m. on June 14, Powell’s students had officially moved on from her classroom, but she was still there, tying up loose ends and waiting to be whisked away by the faculty’s “Sunshine Committee” for her retirement party.

Powell had a goal of reaching 40 years as a teacher and having all of her grandchildren go through her classroom. Having accomplished both goals, she said she is ready to move on.

“Andrea is a team player and will be missed by all of us, she has actively participated in both school and district initiatives and was a key member of the pre-K planning team,” Ribeiro said.  “Her competence, confidence, and willingness to try new things will be missed by all!”

A resident of Bristol for most of her life, Powell attended kindergarten in the very room that she taught her last batch of kindergarteners in.

Powell said that her mother claimed she would be a teacher since she was born. Her aunt, who she adored, was a teacher and would let her do things like correct papers and visit her in the classroom.

“I just always knew that’s what I wanted to do,” Powell said.

When Powell was a kindergartener, she already knew how to read. Her mother, who became a librarian later in life, surrounded Powell with books and allowed her to read anything on the library shelves.

While her intellect and passion for education shaped her path in life, she admitted that these virtues could make her a difficult student at times.

“I remember the teacher having a big book for us to read and I was bored,” Powell said, laughing. “I got into a little trouble because I wasn’t behaving when everybody else was trying to read along with the teacher.”

The 2020-21 year was difficult for any school system, but Powell said BCS fared relatively well within the necessary distancing requirements. Three classes saw positive tests and had to quarantine at different times throughout the year, but Powell’s class was fully in person for the entire year.

“If you can believe that 5-year-olds were able to manage,” Powell said.

Powell said that her kindergarteners did a great job of maintaining sanitation requirements, changing their masks anytime they sneezed, and sanitizing and washing their hands regularly. She removed many of the classroom materials and furniture that took up too much space or might have been difficult to clean and labeled everything from glue sticks to pencils for each student.

Students couldn’t share books, so Powell began assigning drawers at the front of the classroom to each student where she would leave them all a new book each week. A member of the Bristol Area Library board, Powell knew that things like books had to be quarantined after they were used.

“The kids really came to the front and really did the things they needed to do,” Powell said. “They really wanted to be here.”

Powell did not tell her class about her retirement for most of the year out of concern that the idea of her leaving might create unnecessary anxiety for the students. She waited until the last day of school, when the school librarian had all of the students in Powell’s class sign the book “Thank You, Teacher from The Very Hungry Caterpillar” by Eric Carle. Carle is the author of “The Very Hungry Caterpillar,” and Powell’s class read a number of his books throughout the year.

“They knew that I was ‘tired,’” Powell said. “They didn’t understand ‘re-tired.’”

Powell has had countless students come through her classrooms in her 43 years, four of which were spent teaching at Woolwich Central School before she joined BCS. While she has taught now famous students like NASA astronauts like Chris Cassidy, she especially treasured the opportunity to shepherd all three of her grandchildren through kindergarten.

“They managed all day long to call me Mrs. Powell, but as soon as the buses would roll out, they go, ‘Can we call you Granny now?’” Powell said.

Powell’s husband, Nate, is also retiring from his work as a paramedic in the Boothbay region, and the two of them plan to travel to Scotland and Ireland, as well as through Canada on the Trans-Canadian Railway.

She hopes to be wrapped up for the year and moved out of her classroom by July 1.

When asked if she had any wise words for the teacher taking on the ambitious task of filling in her shoes, Powell was quick to respond.

“Take it slow. Assume they know nothing. That way everybody’s hearing the same rules,” she said.

After a year of only seeing her students’ faces during snack breaks, she said that it was those faces she would miss most.