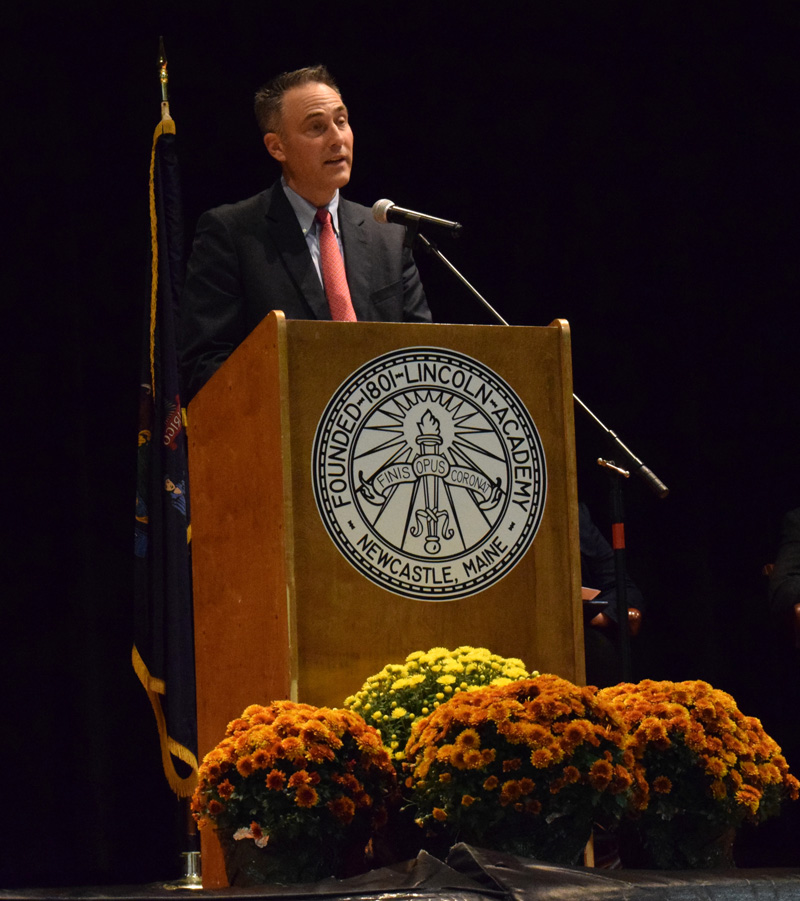 Lincoln Academy pulled out all the stops to welcome its new head of school, Jeffrey S. Burroughs, with an installation ceremony in the Nelson Bailey Gymnasium on Saturday, Oct. 5.

Attendees were greeted by the Five O’Clock Jazz Combo, a student ensemble that set the classy tone for the evening as approximately 150 guests mingled in the gymnasium prior to the ceremony.

The evening closed with an equally classy reception for Burroughs and his wife, Melissa Burroughs, in the Alumni Dining Commons with a tasty spread of skewered chicken sate, roast beef sandwiches, smoked shrimp with aioli, a cheese station, and plenty of dessert.

A cousin of Burroughs, Pastor Karen Mendes, of the First Baptist Church in Burlington, Vt., led the crowd in prayer to start the ceremony at 5:30 p.m.

Judi Hilton, president of the Lincoln Academy Board of Trustees, gave the opening remarks, musing about the history of the school and asking, “What was happening in the world in 1801, when Lincoln Academy was first founded?”

Hilton declared a “new chapter” for the school with the installation of Burroughs as head of school.

“Regardless of what brought you here tonight, I know we are all united in the singular, common interest in the future success of Lincoln Academy, and that, in and of itself, is something worth celebrating,” Hilton said.

“Tonight, I ask that we celebrate and welcome a new headmaster into our community as someone that will create change and hopefully will be a source of better communication. We welcome a strong partnership between the head of school, the student body, and the board,” Matarazzo said.

The LA Lincolnaires then provided a musical interlude with an a capella version of “Siyahamba,” a South African freedom song.

Bryan Manahan, chair of the English Department at LA, spoke to the tight-knit community around the school and how Burroughs, right from the start, stressed that he “wanted to do community here.”

Manahan told a story about a time a friend came to visit him. At every store they went to, he conversed with a different student he knew from Lincoln Academy.

“As we walked to the car, my friend Scott looked at me and said, ‘You live on campus, it’s just a much bigger campus.’ I love that line. I love the idea that campus stretches 3 miles down River Road and all the way through town,” Manahan said. 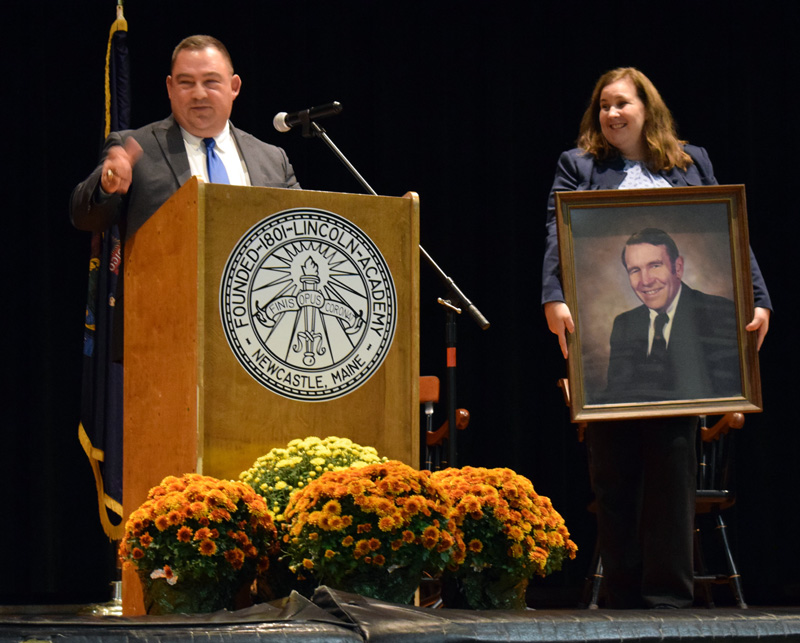 Maine District Court Judge Eric J. Walker had Hilton hold up former Principal Arthur Dexter’s portrait as he told a funny anecdote about the time Walker and some of his friends almost ran Dexter over while he was walking his dog.

Walker said Dexter took mercy on him, joking with him about a suspension or removal from the baseball team before bursting out laughing and telling him not to do it again.

“So Mr. Dexter taught me a valuable lesson that day about how to properly handle a situation when a kid does something stupid and makes a mistake,” Walker said.

Walker gifted the portrait of Dexter to Burroughs and asked him to hang it in his office as a reminder to make the students at LA “feel and know that they are being cared for and that you are here for them, and that you want the best for them.”

“People never forget the way you made them feel,” Walker said.

After Walker’s remarks, the LA saxophone quartet played “Simple Gifts” for the crowd. 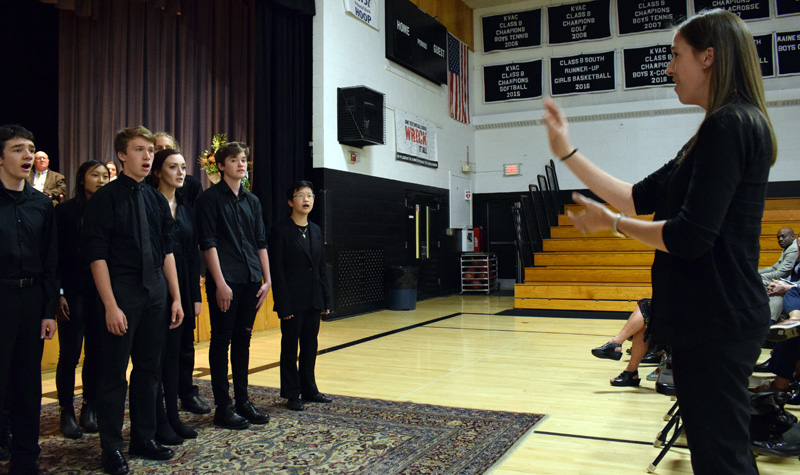 Doug Cummings, a partner with the Educators’ Collaborative consulting firm, then spoke and introduced Burroughs for his response.

Educators’ Collaborative has worked with Lincoln Academy in the past and helps conduct searches for heads of school, among other things.

Cummings said he came to know Burroughs quite well during his time as executive director of The Independent Schools Association of Northern New England. He said Burroughs used to corner him to talk about leadership.

Burroughs, in his remarks, stressed the importance of openness and community and talked about his passion for education.

“Lincoln Academy’s motto, Finis Opus Coronat, ‘the end crowns the work,’ invites us to appreciate the role of our work as a school community,” Burroughs said. “My love of teaching comes from a belief that giving my best each day to the students can make a small impact on their lives.

“While we can never be certain how our efforts will be rewarded, I do know that our collective impact will be rewarded and inspire crowning moments in the future,” Burroughs concluded.