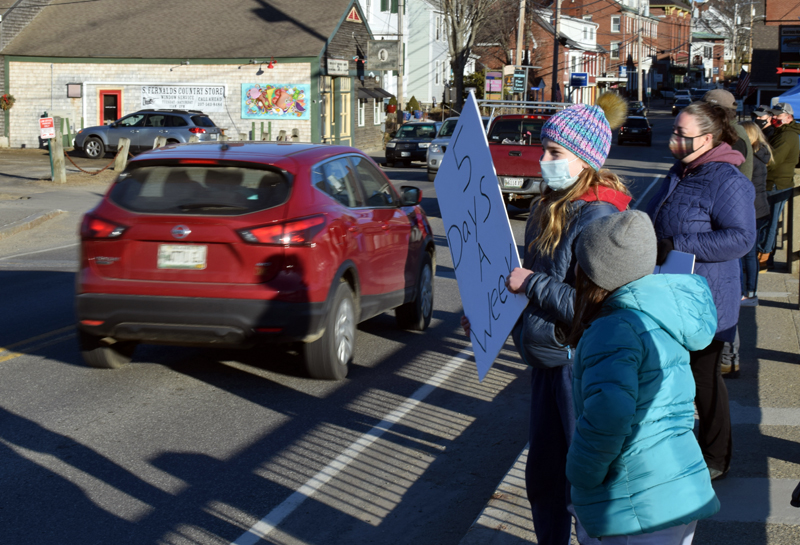 A group of Lincoln Academy students and parents gather on the Damariscotta-Newcastle bridge in support of a return to full-time, in-person instruction at Lincoln Academy on Saturday, March 13. Anthony Anderson, an LA parent who organized the demonstration, said he counted 250 honks or thumbs-up from passing motorists. (Evan Houk photo)

As Lincoln Academy plans to hold off on returning to full-time, in-person instruction until September, some parents and students are urging the school to reconsider its decision.

About 20 parents and students held a demonstration in support of a full-time return to campus on the Damariscotta-Newcastle bridge on Saturday, March 13.

In the hour the group was posted on the bridge waving homemade signs, Anthony Anderson, an LA parent who organized the demonstration, counted approximately 250 honks or other shows of support such as a thumbs-up from passing motorists.

Anderson said that many elementary and middle schools returned to a regular in-person schedule in September and that LA is being “overly cautious” continuing with a hybrid model.

“We just want to create a respectful dialogue with the school about returning to in-person classes full time,” Anderson said during Saturday’s demonstration.

LA Head of School Jeff Burroughs said the school administration is sympathetic to the parents’ concerns and he would like to see the school return to full-time, in-person instruction as soon as it is safe to do so.

“Safety is our number one priority,” Burroughs said.

Burroughs said on Monday, March 15 that the school simply does not have the space to return all of the 533 students to campus at one time while maintaining proper physical distancing per Maine Department of Education mandates.

He said the school is currently planning to return to full-time, in-person instruction at the beginning of the next academic year in September. For the final trimester of this academic year, Lincoln Academy has shifted from a four-period day, which it had maintained during the first and second trimesters, to a seven-period day. The changes took effect Tuesday, March 16.

When the administration was looking at ways to improve education for students during the pandemic, Burroughs said that “time on campus is the most important point” that needed to be figured out.

According to LA spokesperson Jenny Mayher, the new schedule will give students who are struggling academically more opportunities to come to campus to receive help and ask their teachers questions. 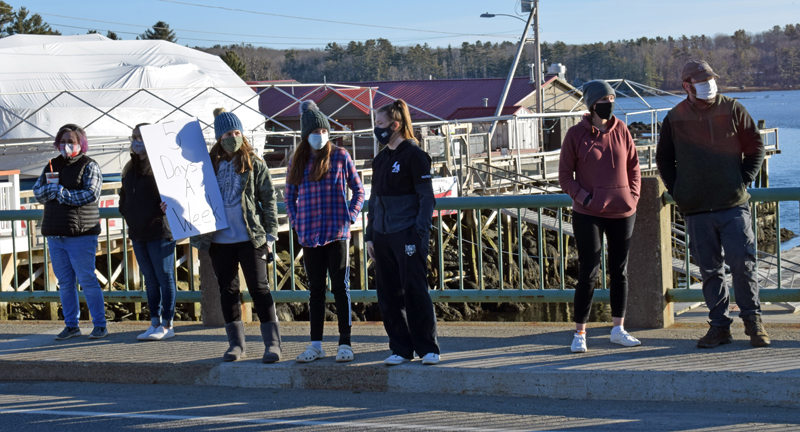 Demonstrators gather on the Damariscotta-Newcastle bridge to voice support for a return to full-time, in-person instruction at Lincoln Academy on Saturday, March 13. (Evan Houk photo)

Mayher said students are struggling more than in a typical year, which is one of the reasons LA shifted the schedule for the final trimester.

“We regularly speak to neighboring schools in Maine and New England, and universally students are struggling more than in typical years. Like our peer schools, we are doing what we can to accommodate these students,” Mayher said by email on Tuesday, March 16.

The third trimester changes result in a 1 hour and 10-minute increase in the school day, each subject being taught in person twice a week rather than once, the elimination of shorter remote classes on Wednesday, and additional on-campus academic support for students.

Students with last names beginning with letters A-J will continue to attend in person on Mondays and Thursdays, while students with last names starting with K-Z will attend on Tuesdays and Fridays. Wednesdays will be reserved for academic support for the 60 or so students who are opting to engage only by virtual learning completely off campus and also for students struggling with the hybrid model who need more on-campus time with teachers, Mayher said.

In the previous hybrid schedule, students attended four classes on Monday or Tuesday and three classes on Thursday or Friday with a club or study hall period at the end of the day, which resulted in each subject being taught in person once each week.

There is a period for extracurricular activities from 2:20-3 p.m. and the school plans to have spring sports and some performing arts.

Burroughs said it is looking like the Maine Principal’s Association will be approving all spring sports, so he is hopeful that LA can offer them. “That’s going to give young people what they really want, which is contact,” Burroughs said.

The new schedule also allows vocational students who attend the Bath Regional Career and Technical Center four days each week to participate fully in all their classes at LA, Burroughs said.

However, the parents demonstrating on Saturday do not believe the schedule changes go far enough in returning students to a normal academic structure.

Anderson organized a Zoom meeting on March 7 with other parents and LA students to discuss the school’s plans. During the hour-long meeting, the 12 attendees expressed agreement that the negative academic, psychological, and emotional impacts not being in school full time has had on students outweigh the potential negative effects of contracting COVID-19 in school.

“The solution is worse than the actual problem,” Anderson said during the meeting. 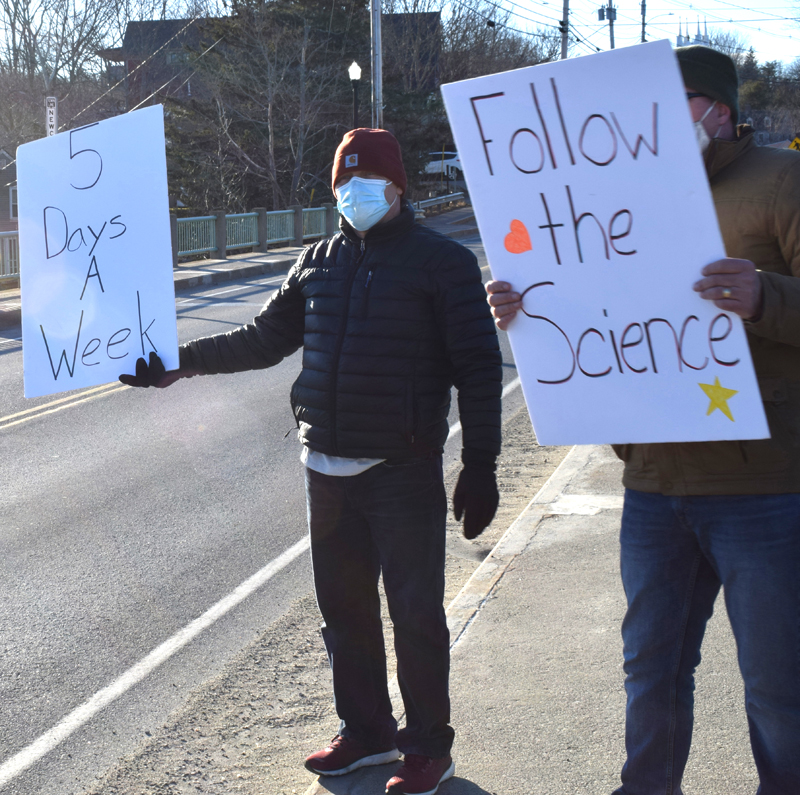 Anthony Anderson, an LA parent and organizer of a demonstration on the Twin Villages bridge, holds a sign expressing support for a return to full-time, in-person instruction at Lincoln Academy on Saturday, March 13. (Evan Houk photo)

Heather Northrup, a teacher at Jefferson Village School and parent of an LA junior, said remote learning has been a “great” struggle. She said her entire family contracted COVID-19 and her children just had “the sniffles” from the illness and did not pass it to any of their close friends.

“My perspective as a teacher who has been in five days a week since August is that if and when you have a case, you shut down, you do a deep clean, and you reopen,” Northrup said. JVS has had cases of COVID-19 in the school and had to temporarily switch to distance learning as a result, most recently on March 3.

Northrup said she doesn’t understand why schools in AOS 93 can use a 3-foot physical distance rule, per Maine Department of Education guidelines, and LA does not.

Mayher said that even with a 3-foot rule, there still would not be enough space on campus for all 533 students to return at once. Burroughs said there has to be no distancing requirements before all the students can return full time.

Anderson’s son Sullivan Anderson, who is a student at LA and the Bath Regional Career and Technical Center, said he is struggling with the hybrid schedule and needs more hands-on learning time.

He said that most of his peers that he has talked to want to return to school full time.

“I’ve talked to people with different mindsets … and probably 75% of them want to go back to school full time,” Sullivan Anderson said.

Paul Miner, of Nobleboro, said his son, a member of the National Honor Society, is struggling and virtual learning has been a “challenge.”

Burroughs acknowledged that students at LA who normally excel are struggling with the hybrid model.

“The flip side is also true. We’ve seen some young people who’ve done incredibly well who actually said ‘I want to keep doing this.’ It’s really hard to see, but I think there will be some learning that comes out of this on how we help individualize and differentiate learning for young people,” Burroughs said.

“What we saw these first two trimesters are more students are struggling in more courses in school … It’s not a hugely broad concern for us yet, but we really thought it’s important that we help folks get forward,” Burroughs said of the third trimester schedule change.

The new school schedule and parents’ concerns will be discussed at the Lincoln Academy Parents’ Association meeting at 6 p.m. on Thursday, March 18.