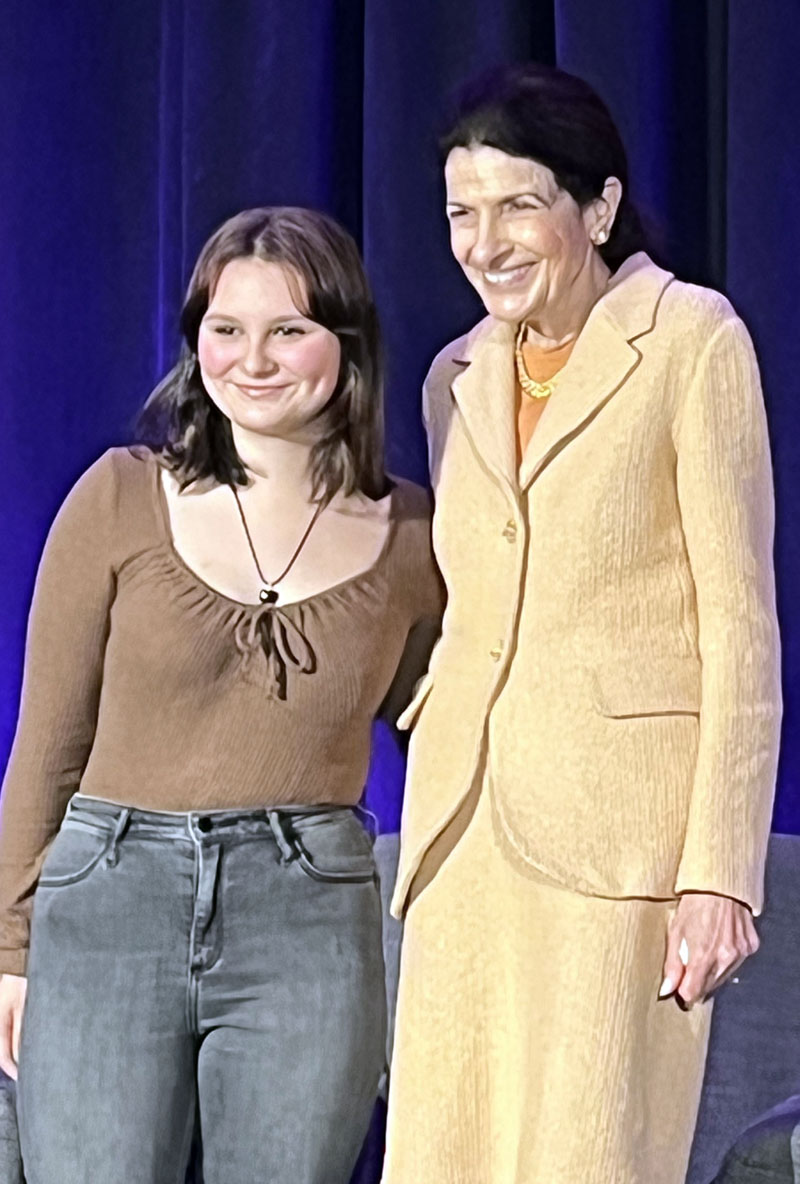 That was before snow in Downeast Maine made travel impossible for members of the panel from Harrington and Jonesport.

“My cell phone rang on the way to Portland,” said Kelley Duffy, Lincoln Academy’s director of curriculum and instruction, who advises the group. “It was Kristin Ryan from the Snowe Institute, and she said the group from Washington County couldn’t make it, and did any of our girls want to speak as part of the panel? I told her I would call her back, and posed the question to the van full of girls.”

Sophomore Leah Gemeinhardt, in her first year in the program, rose to the challenge. “Leah said, ‘Well, the program says we should take risks, so I guess I’ll do it,’” Duffy said. “It was truly an amazing example of the lessons they have been learning coming to life.”

“It was a spur of the moment thing,” said Gemeinhardt. “This whole program is about building your confidence and making you a better leader so I figured why not take the opportunity to do it?”

“I really thought there might be 100 people in the room, but when we got there, this giant ballroom was packed with more than 600 people, most of them adults, but Leah didn’t hesitate,” said Duffy. “First, she had to eat lunch at the head table with the author and Senator Snowe and their husbands, and then she got right up on the stage. She was amazing! She spoke with such honesty and poise about her experience being a teenage girl in rural Maine. She had the crowd eating out of her hand.”

“Leah was new to the program in September of this year, and she wowed the entire audience,” said Ann McFarland, former chair of the Lincoln Academy Board of Trustees, who participated in the luncheon. “Her poise and presentation made those gathered in the ballroom sit up and take notice. She had only the lunch time to prepare, but had they not told us, we would not have known. I was lucky enough to be seated by [Lincoln Academy Head of School] Jeff Burroughs, and he was thrilled with Leah’s stepping up and putting LA on the OSWLI map.”

“The worst part was the anticipation,” said Gemeinhardt. “Once I was up there it was fine, I felt like I was connecting with the audience, and it wasn’t that bad.”

The panel discussed Georges’ book, which details the experiences of five girls from Washington County. Gemeinhardt spoke about how her own experiences correlate with the experiences of the girls in the book. She fielded questions including what it is like to be a teenager in today’s world, what she hopes to do after high school, and how poverty, drug, and alcohol abuse affect young people today.

The Olympia Snowe Leadership Program works with girls between their sophomore and senior years. Each year, LA chooses between five and seven girls at the end of their ninth grade year through a faculty nomination process. This is the school’s second year in the program, so the current LA participants are sophomores and juniors.

The program offers three-year leadership training based on individual relationships and mentoring. Each year has a different focus: tenth graders focus on values, eleventh graders on voice, and twelfth graders on vision.

“What advice would I give to other young people about putting themselves out there? I would say ‘It’s okay to take risks,’” Gemeinhardt said. “It can be scary, but it’s worth it. I got to meet a bunch of new people, including Senator Snowe and the president of the University of New England. I found connections with people. The program is definitely worth it. You learn to better yourself, to become more comfortable in your own skin.”

“When we left the conference I turned around to the girls and said, ‘this is the best example of the power of saying yes to opportunities that present themselves,’” Duffy said. “This morning we had no idea what was going to happen, but because Leah said yes, so many cool things happened.”