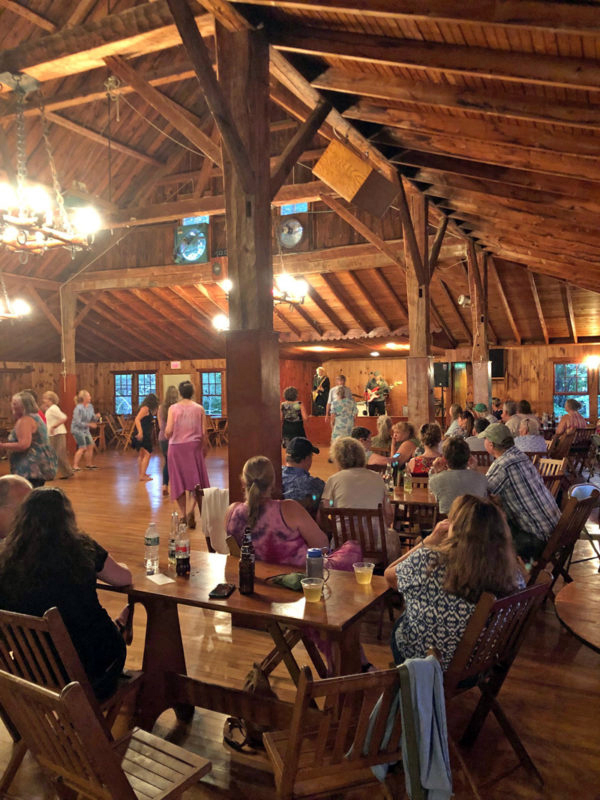 Music fans dance at the Memphis Lightning Show last summer at Lakehurst Lodge in Damariscotta. A group of Lincoln Academy students and parents have raised funds for an independent “spring formal” dance to be held at Lakehurst, with LA’s school-sanctioned prom set to take place separately on the school’s campus. (Photo courtesy Lincoln County Television)

A group of Lincoln Academy seniors are planning an independent off-campus “spring formal” dance as an answer to the school-sanctioned prom that will be held in the Lincoln Academy courtyard and dining commons.

The group of students and parents has set up a GoFundMe for a separate off-campus spring formal event that has raised $4,260 as of April 19. The cost of the event will be covered by the fundraiser and ticket sales, said organizer and LA senior Olivia Stiles during a phone interview on April 11.

The non-school-sanctioned spring formal will be held at Lakehurst Lodge in Damariscotta from 7 to 11 p.m. Saturday, May 28.

After two years without a prom because of the COVID-19 pandemic, a group of four LA seniors decided they wanted to have their last formal dance elsewhere rather than on the school’s campus.

“We, as the seniors, feel that so much has been taken from us because of COVID, and we want our last prom to be as memorable as possible,” Stiles said.

Lincoln Academy’s official prom, with a theme of “Secret Garden,” will be held from 7-10 p.m. Saturday, May 21.

The LA administration and the prom planning committee, made up of junior students, decided to have the prom on campus back in February in the midst of the omicron surge of COVID-19, Jenny Mayher, the school’s director of communications, said by phone on April 12.

Head of School Jeff Burroughs and the prom planning committee made the decision to hold the dance in the school’s courtyard and dining commons to ensure it would not be canceled by an outside venue if COVID cases surged again.

The fundraiser for the spring formal was started approximately two weeks ago after students were told by the LA administration that the location of prom would not be changed from the school grounds, Stiles said.

Mayher said the prom committee was already too far along in planning and it was too late to change the venue.

“The school feels like we did everything we can to make plans for a safe prom,” Mayher said. “We’re really sad that a group of seniors felt they had to go out on their own.”

She said she understands the desire to plan a prom since this year’s group of seniors did not have a chance to plan one last year as juniors. The juniors traditionally plan the prom for seniors each year, except for the last two years when no prom was held.

However, the LA administration would prefer only one school-sanctioned event to happen in the interest of the students’ safety, Mayher said.

Stiles said she hopes everyone can attend both dances if they choose, although she will likely only attend the spring formal because of the amount of work and planning that went into it.

“We didn’t want to take away from anything prom committee was doing at school,” Stiles said. “We don’t want it to be a competition between the proms or have any negative energy associated with that.”

Stiles has fond memories of going to the LA prom at Lakehurst her freshman year and hopes for another fun experience.

The theme for the spring formal is “Memories Under the Stars” and will have a DJ, food, and a photo booth, Stiles said.

There will also be a memorial of Paris Pierpont, a former Medomak Valley High School student who had also attended LA, Stiles said. Pierpont died in a car crash on River Road in Edgecomb last October. Stiles encouraged other attendees to bring pictures and write memories of Pierpont at the dance.

Stiles said she is thankful for everyone who donated to the fundraiser for the spring formal. Juniors and seniors are invited to the prom and Stiles expects between 100 and 200 people to attend, saying there is a lot of interest.

Correction: An earlier version of the article “LA students plan off-campus ‘spring formal’ event” on Page 1 of the April 21 print edition incorrectly stated the start time of Lincoln Academy’s prom as 3 p.m. The prom will run from 7-10 p.m. on Saturday, May 21. The Lincoln County News regrets this error.