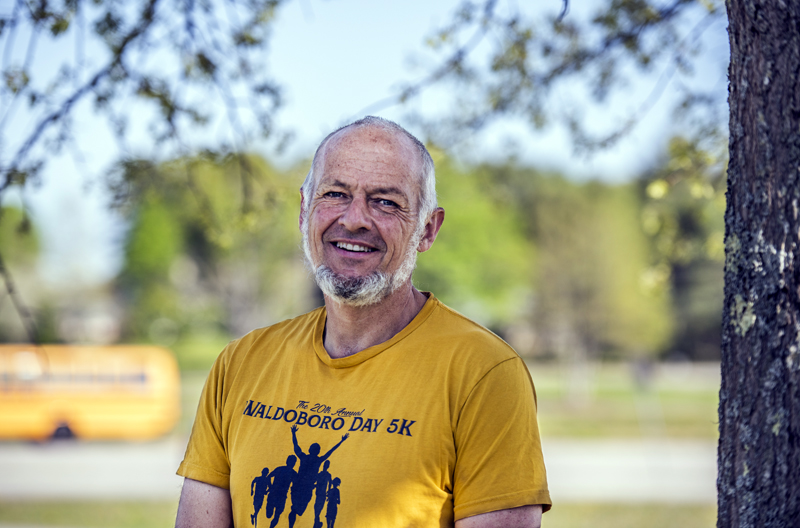 Medomak Valley High School math teacher Bill Hinkley poses for a photo outside the school on Monday, May 17. Hinkley is the Lincoln County Teacher of the Year. (Bisi Cameron Yee photo)

On May 12, the Maine Department of Education announced the county teachers of the year. Medomak Valley High School math teacher Bill Hinkley was Lincoln County’s choice for the honor.

“Personally, as teachers, we’re trained not to look for accolades and don’t often have opportunities to be judged by our peers. Teachers don’t look for intrinsic motivation. It feels very good,” Hinkley said.

MVHS Assistant Principal Tamra Philbrook nominated Hinkley. “She has a good sense of the rhythm of my class,” Hinkley said.

Hinkley thought twice about pursuing the nomination, but he thought it would be cool for the school to have the honor two years in a row. MVHS English teacher Heather Webster was Lincoln County’s Teacher of the Year in 2020 and one of three finalists for Maine Teacher of the Year.

MVHS Principal Linda Pease said, “We are thrilled that we have a Teacher of the Year winner for the second year in a row. I think it’s past time for teachers at our school to be recognized for their excellence and teachers like Bill Hinkley and Heather Webster deserve that recognition.”

Hinkley grew up in Brunswick and graduated from Brunswick High School. He attended Cornell University and received a degree in mathematics.

Hinkley said he tutored everyone in the dorm who needed help with math. His first work-study job was in the dining hall on a fryolator. He hated it. A friend told him about an opening for an on-campus math tutor. As a freshman, Hinkley didn’t expect to get the job, but he did. And he was good at it.

Hinkley acquired a master’s degree in mathematics from the University of Illinois, specializing in logic and theoretical computer science. He was working toward his doctorate, but said “it absorbed a huge amount of who I was” and he decided to leave the program.

After he finished school, Hinkley had numerous opportunities. He was approached by recruiters from big hedge funds. But he had already decided he wanted to teach.

“I was thinking about being a math professor,” he said. “It was more prestigious. But I could sense it wasn’t going to be right for me.”

So Hinkley started out teaching at prep schools: Gould Academy in Bethel, then Deerfield Academy in western Massachusetts. “I wanted to prove I could teach at the highest level,” he said.

But Maine was home. Damariscotta Lake and the rolling hills of Lincoln County eventually called him back. He and wife Amy, an architect who teaches at the University of Maine at Augusta, found a 75-acre farm in Waldoboro with “a beat-up old farmhouse” and an organic blueberry field. Hinkley spent the next 11 years teaching at the Chewonki Foundation in Wiscasset.

“I told myself I was a really good teacher for kids who were motivated students,” Hinkley said. But he didn’t think he was a good fit for public school until he taught at the state prison, through a program run by philanthropist Doris Buffett’s Sunshine Lady Foundation.

“Man, I loved it,” he said. “Talk about motivated students — they had tons of time because they didn’t have anything else to do.”

Hinkley decided to move to public school teaching after a year as head of the semester school at Chewonki — his only taste of administration, which he calls “enough to know it was not the direction I wanted to go.”

At Chewonki, Hinkley had 40 motivated, engaged, bright kids from all over the country — “wonderful kids, easy kids to teach,” he said. But when he was tasked with recruiting kids from several small rural schools, he found a new aspect of his calling. Visibly moved by the memory, Hinkley talked about “the starkness of those programs. The schools were pretty rough, not a lot of economic opportunity.”

As for those bright kids at the prep schools and boarding schools where he had taught, Hinkley said, “They didn’t need me; they were going to be fine.” He had perceived a “real need — like I could really make a difference in the lives of these kids.”

“It always gets me when I think about what some of our kids have gone through, and continue to go through, and end up being,” he said. “They do amazing things in spite of their tough background.”

In 2012, Hinkley started at MVHS. He teaches pre-algebra, pre-calculus, three levels of calculus, and Advanced Placement statistics as an independent study. He thinks the school will offer statistics next year instead of college calculus, because statistics is important for so many fields, including medicine, education, and psychology. “Not all kids will need calculus, but they will need statistics,” he said.

MVHS senior Jayla Robinson was a freshman when she was assigned to her home base class with Hinkley. Home base classes meet twice a month “for the purpose of increasing connectedness to school, community, country, and world,” according to the school.

Robinson remembers playing ultimate Frisbee with other home base classes before the pandemic. “I’ve never seen so many students have so much fun with one teacher,” she said.

“I’ve seen kids from all different grades, all different classes, all different homerooms stop by to see him for math questions, to drop off their tennis stuff, to say hi, or just to give him a hard time — including teachers,” she said. “Our homeroom is always a happening place because it’s such a good vibe to be in.”

Robinson took Algebra II with Hinkley. “Math was always a little bit of a struggle. I had to work extra hard to get the grades I expect of myself,” she said. “He was always encouraging and I felt like I really understood what I was learning from him.”

Robinson, who runs cross-country at MVHS, recalled achieving her season-best time of 6:52 during “Monday miles” training, when Hinkley, who  coaches boys tennis for the school and runs recreationally, came out several times and ran the mile with the team.

“He just pushed me. If he wasn’t there, I don’t think I could’ve done it,” she said.

Robinson said Hinkley has “100%” impacted her future. “He’s shown me not to give up, given me steps to keep going. He showed me that hard work pays off, and I will take that into the future with me,” she said.

“Mr. Hinkley was always there, ready to teach, whether there was one student or 15 students in the class,” she said. “If you wanted to be there to learn, he was there to teach.”

Of his job at MVHS, Hinkley said, “It’s fulfilled pretty much everything I wanted. I wanted to be a resource for the really good kids who decided to stay here. We’re getting kids into MIT and Princeton and West Point.”

But it’s equally important for Hinkley to connect with kids who are struggling. “A lot of kids ask me why I’m teaching here,” Hinkley said. “I won’t teach anywhere else. This is where I belong.”