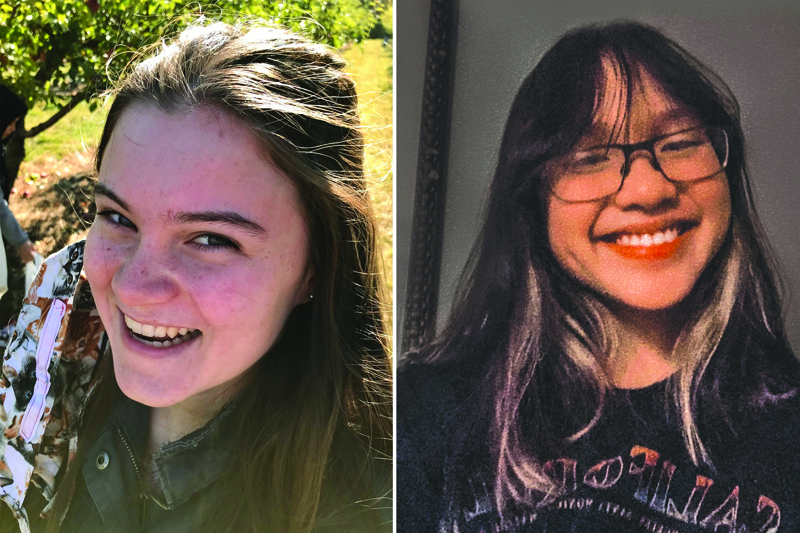 On Saturday, April 3, Sciatzy Solis and Ella Donaghy competed against more than 130 students from 22 schools in categories across a variety of STEM fields, including biological and behavioral sciences, environmental and ecological sciences, and computer sciences.

Maine State Science Fair participants are eligible for a number of scholarships, mostly for juniors and seniors, but a $1,000 scholarship from Husson University is open to all grades.

Solis and Donaghy spent over 50 hours each preparing for the science fair, starting in November 2020. In addition to research, they had to write surveys for use in their research, then revise the surveys multiple times.

Solis is a first-generation immigrant, having come to this country five or six years ago from the Philippines.

Solis said she has friends from both generations and one day, out of curiosity, she asked some of them which generation they thought was more emotionally impacted by their immigrant status.

Each generation thought they had it harder and Solis started wondering who was right.

Her project addresses that question.

Solis broke her survey down into age groups based on the theory of psychosocial development, which posits that personality develops in stages from infancy to adulthood.

She included two sections in the survey, one with general questions like age, gender, and country of origin, and another section that used the Rosenberg self-esteem scale, a 10-question survey developed in the 1960s, to determine how respondents rated their feelings about their own self-worth.

With help from her own immigrant community, she surveyed about 200 people from more than 15 countries. Solis said the results “ended up being pretty diverse,” even though a big chunk of respondents were Filipino immigrants.

Solis concluded that first-generation immigrants have higher self-esteem. She believes it is because they had already gone through the life stages most affected by change prior to immigrating.

She found that the second-generation immigrants she surveyed, mostly teenagers, were more likely to be affected by their immigrant status because they were in a life stage when self-esteem is still being formed.

Solis said she got so nervous about the science fair interview that she ended up focusing all her energy there and forgot about the Husson University scholarship.

“I ended up placing first in my category, so I think it was worth it,” she said.

Solis has always been interested in psychology and hopes to eventually work in a related field.

Ella Donaghy placed second in the Behavioral Sciences-Sociology category for her project analyzing factors that have affected mask usage throughout the pandemic.

Donaghy said that the topic “really affected my family a lot” because they own a small business and “we had to deal with letting people come in without masks, or mandating it.”

Donaghy’s survey used “mostly multiple-choice and check-all-that-apply” questions, since she knew that mask-wearing “could be seen as a sensitive topic and some people may have strong opinions.”

Donaghy used the social media accounts from her family’s business to source 696 respondents to her survey. She asked a series of basic questions but included location information so she could see how population density factored into her topic.

She said her sample group was not as broad as she would have liked, “so I couldn’t make any big conclusions from it.”

Donaghy didn’t expect to place at the fair. “I was just kind of going for the experience,” she said. But she wound up winning a $1,000 scholarship from Husson that she can use to take classes for college credit anytime.

“That was really amazing for me because I didn’t expect anything like that,” she said.

“She really encouraged everybody to partake in the science fair,” Donaghy said. “If this wasn’t something we had been encouraged to do, I probably wouldn’t have done it.”

Hatch was one of five teachers across the country who had an opportunity to develop their school’s research program with a week of free STEM consultation from the New York-based Advancing Science Research Teaching Program, which focuses on improving high school students’ access to science research opportunities. STEM stands for science, technology, engineering, and mathematics.

Hatch credits this training with giving her the tools to help Solis and Donaghy, along with a few others, “tackle a survey-based behavioral project for the first time.”

Hatch teaches a Science Research Methods course at MVHS. “My goal is to help more students compete at the state science fair, but also gain real experiences in science research, which often consists of failure and dead-end roads and requires resiliency and passion to overcome these obstacles,” she said.