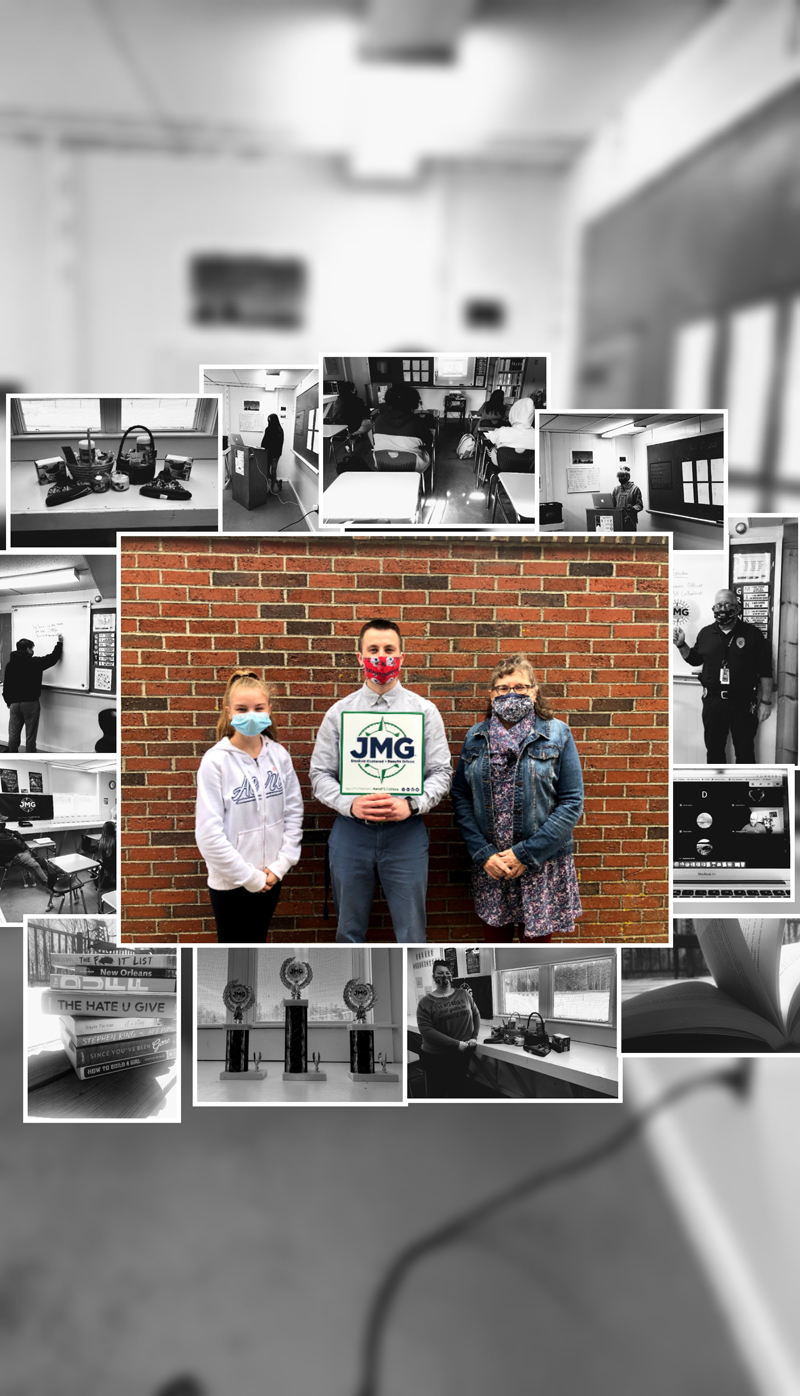 The prize-winning photo collage from students in the Jobs for Maine Graduates program at Medomak Valley High School includes a blurred background image of a classroom with a series of black-and-white photos around a central image. The central photo shows three generations of people involved in the program, from left: freshman Alyssa Ciasullo, program specialist Ryan Rice, and Principal Linda Pease. (Photo courtesy Ryan Rice)

Students from the program won first place in the photo contest and fourth place in the Career Association Presentation.

Jobs for Maine Graduates is a statewide program started in 1993 that, according to its website, “strengthens Maine’s workforce and improves the economy by providing students with the guidance, skills and opportunities they need to succeed in their careers.”

The program has been in place at MVHS for the past three years and the current specialist, Ryan Rice, has been teaching the program curriculum for the last year.

The Career Development Conference takes place each spring to celebrate the accomplishments of the program’s students. The competition was canceled in 2020 due to COVID-19. This year, a scaled-down conference took place remotely from April 13-16.

Eight juniors and seniors selected based on their grade and their experience in the program were able to compete in a photo contest, career association presentation, resume preparation, virtual mock interviewing, decision-making, and public speaking. Winners were announced at the end of April.

“We did really well this year!” Nickles said. She said the conference is “like a review of all the stuff you prepare for in Jobs for Maine Graduates, so you kind of already know it.”

Andrews had already made her resume in class. “I really just had to tweak it a little bit,” she said.

The photo contest was a team competition. The theme this year was “25 Years of Jobs for Maine Graduates.” Nickles said the class made a collage with a central picture featuring three generations of people who have been involved with the program at MVHS, with “black-and-white aesthetic pictures around it to really make the center picture pop.”

Nickles said Pease really pushed to get the program at MVHS three years ago, “so we thought she was the right person to put there.”

For the slideshow presentation, the team included bios on every member and events the program held for the community.

“On a normal year we would do a lot more events, but this year we were challenged,” Nickles said. Still, the team raised $1,850 for the Waldoboro Food Pantry by selling clay bowls created by MVHS students.

“We’ve done interviewing, which has helped a lot. I just developed skills over time, which I wouldn’t have had at all if I wasn’t taking part in this class,” Andrews said. “That helped me get a job. Same for the resume — I wouldn’t even know where to start without being in this class.”

Andrews currently works at The Jojoba Co. in Washington, where she seals and packages bottles of jojoba oils. She said she was unsure of how best to fill out the application. “I needed help with that and my specialist was there,” she said.

Nickles said, “We go over finding jobs as well as how to resign from a job.” Nickles runs the front end and sells coffee at Dunkin’ Donuts in Rockport, where her mom is a manager. She recently transitioned there from a job she had held for a year and a half. “JMG helped me resign from that job,” she said.

Andrews said that Jobs for Maine Graduates also helped with college applications and finding scholarships. “There were quite a few scholarships my specialist had talked to me about and I didn’t even know that they existed,” she said.

She said the program has shown her “how to be an adult the right way.”

Nickles said it has given her “confidence in being an adult.”

“I’m not as scared to go be on my own,” Nickles said. “I’ve got a grasp on it through this class.”

Rice currently has 50-55 students in the program and looks forward to building on those numbers next year. He is a mentor and a liaison for his students even after school ends — he follows up with them after graduation  and every month for the next year.

“We expect students to want to work and use the skills they’ve learned,” he said.

“It’s good to see them coming out of their shells, being more successful and being prepared to work as adults,” Rice said.