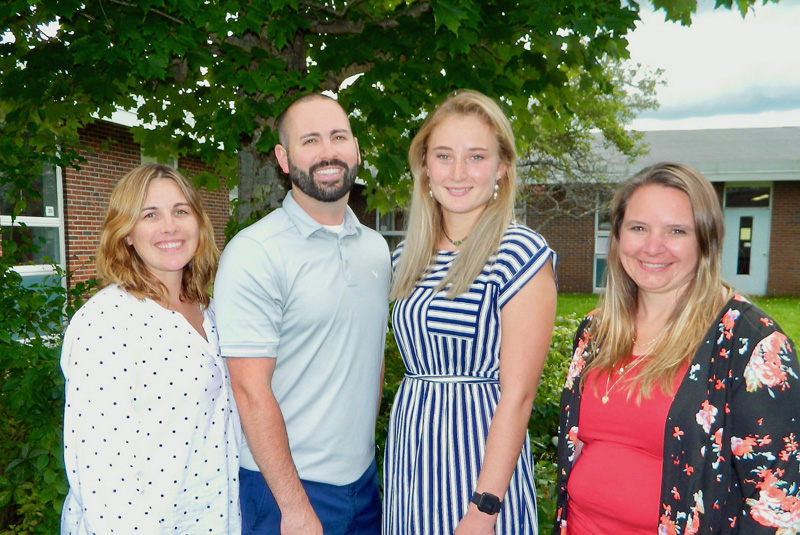 Bowman, of Washington, graduated from MVHS in 1995. She ran her own preschool in Union and worked in special education at other schools before returning to her alma mater.

Wilson, of Friendship, graduated from Morse High School in 1996. She is a school-to-career coordinator at both MVHS and the new Midcoast School of Technology in Rockland, the career and technical education school for RSU 40 and neighboring districts.

“I work on career prep, the school-to-career cooperative education program at the new school that just opened,” Wilson said.

Wilson said the program helps students make choices and plans for their education and career paths during and after high school.

It is Wilson’s first year in RSU 40. She spent the last four years in Kansas, teaching at a military school in Junction City.

“It’s nice to be back in Maine and teaching (career and technical education),” Wilson said. “It’s nice to see kids getting jobs and developing hard skills and life skills.”

Bowman, the resource room teacher, works with special education students. She is excited for the opportunity to work with a different age group.

“I’ve worked with younger kids so long that working with high schoolers is a big change and I’m enjoying it,” Bowman said.

Bowman said she has wanted to be a teacher since she was very young.

DiPompo said the students make the job enjoyable. In addition to teaching, he enjoys coaching. He is an assistant coach on the MVHS football team and has coached baseball and basketball in the past.

“I was the assistant athletic director at John Bapst. All my life I’ve been around athletics. I grew up with athletics and always wanted to be as close as I could be to it, which led to coaching,” DiPompo said.

Wilson began her professional career as an architectural engineer, but when her husband was stationed at Fort Riley in Kansas, there were no jobs in her industry, so she started teaching robotics and engineering.

“I had no teaching education, but Kansas has a great industry-to-CTE program through their Department of Education and I got my second master’s,” Wilson said.

“I ended up loving it as soon as I started, ended up coaching at robotics competitions,” she said.

DiPompo said teaching was also a career shift for him.

“I started in business because my family has one, but all my friends and college teammates got into teaching and when I was in college, my coach asked me to be an assistant and that was my introduction to it,” DiPompo said.

Cohen, a 2016 graduate of MVHS, teaches government, humanities, and geography through current events.

Her favorite part of teaching, she said, is “watching students conquer a subject and seeing them grow over time.”

Cohen’s teachers during her time as a student in Waldoboro were “role models” and inspired her to teach, she said.

“Medomak Valley is a wonderful atmosphere,” she said.