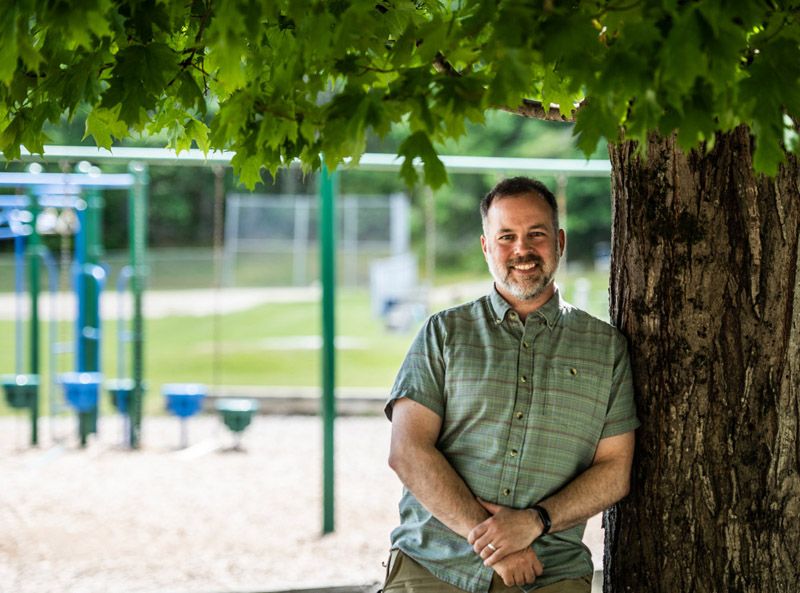 Adam Bullard stands for a photo outside the Nobleboro Central School on Friday, June 24. Bullard will start his tenure as principal at NCS on Friday, July 1. (Bisi Cameron Yee photo)

Adam Bullard, the new principal for Nobleboro Central School, brings not only administrative experience, but also more than nine years of experience in special education to the position.

Bullard describes his leadership style as relational and looks forward to bringing the broader community together around common goals.

Bullard’s interest in human behavior led him to the University of Maine in Orono, where he majored in psychology. After  working at the nonprofit Northern Light Acadia Hospital, a community mental health agency located in Bangor, he realized the happiest moments of his childhood happened in school, where he loved communicating and connecting with teachers. It was then his career goals began to crystallize, he said.

Bullard moved to the Midcoast where he managed after school programming for the teen center in Camden, supplementing his income by substitute teaching at Camden-Rockport Middle School. He soon realized he needed more education to achieve his goals.

After completing a one year master’s degree program at the Harvard Graduate School of Education he returned to Camden as an educational technician. Three years later he hit another career milestone when he was recruited by Thomaston Grammar School as a special education case manager, a position he saw as a continuation of his work as an ed tech. He eventually returned to Camden-Rockport Middle School in a similar position before landing at the Rockland District Middle School as a case manager for its Phoenix Behavior Program.

A desire to try his hand at traditional education led him to St. George Municipal School in Tenants Harbor in 2013, where he taught middle school math before being tapped to be the instructional administrator in 2018. At St. George Municipal School, the instructional administrator serves as the building leader, collaborating as part of a shared leadership structure that includes the superintendent, assistant superintendent, and special education director.

Bullard said he liked the size of the school and the feeling of community.

As a one-building district, the role “was the right fit at the right time,” Bullard said. He counts his greatest accomplishment there as charting the school’s course through the pandemic, being a steadying influence in a time of crisis.

After four years as part of the leadership team at St. George, Bullard said he felt ready for more responsibility, and wanted to be part of a larger district with more networking and collaboration opportunities. NCS, which is similar to St. George in terms of school size and community support while also being part of a five-school alternate organizational structure, appealed to him.

Bullard is a proponent of project-based learning, in which there’s a tangible product at the end of the unit, a meaningful achievement that can be witnessed by the community.

At St. George, students built a boat, learning math and science skills while connecting with their maritime history. Bullard said projects can take many forms and can be modified to teach to core standards.

“You have to teach students how to read, you have to be able to show kids foundational math skills but you also have to bring in some more of these experiential pieces to get kids more engaged,” he said. “That can be really exciting for educators.”

“The denser our networks, the more support for our students,” he said. “We can’t do it alone.”

According to Bullard, the biggest challenge serving children in special education may not be so much about the number of kids as it is about their level of need. Limited resources make it essential to meet those needs at the classroom level.

“It takes hard work,” Bullard said. “No one thing works for every kid.”

One piece Bullard thinks a lot about is how student achievement is measured. He would like to see a broadening of the idea of success, noting that test scores present only one part of the picture. Other considerations include engagement, purpose, and character. He wants to help students be better citizens and become more thoughtful members of society.

The Nobleboro School Committee hired Bullard on June 13. He will start officially work on Friday, July 1, but he has already reviewed the structure of NCS, met the staff, albeit briefly, and had conversations with several parents. He knows that the parents and the community appreciate the school, have a strong sense of its importance to the town, and want more stability in leadership.

“I want to learn it all I can so I can be its biggest cheerleader,” he said.

He realized that dream in a way as the lead singer for Just Teachers, a band based in the Camden-Rockport area made up of fellow educators. The group has since disbanded, but not before performing as the closing act at the 2021 Camden Snow Bowl.

Bullard’s other hobbies include hiking, canoeing, and travel. He is a sci-fi enthusiast and a self-described Star Wars nerd.

Bullard lives in Thomaston with his wife Meredith Lynt and their 3-year-old son, Morris. Bullard and Lynt met when they both volunteered with Trekkers, an outdoor-based youth mentoring group. They share a passion for supporting youth not just academically but holistically.

For Bullard, NCS is a new challenge, one that he welcomes. While he can’t control all the factors that impact a student’s success, as a building leader he can control how students are taught, how they are treated, how they are assessed, and how they are inspired.

“As far as what’s next, I’m just really excited about right now,” he said.